TULSI GABBARD, the newly elected U.S. House of Representative member who is entrusted with the concerns of Ka`u, Volcano, South Kona and all rural areas in the state of Hawai`i, has been in Washington, D.C. this week for orientation.
According to a Michael Levine story this morning in Civil Beat, she said she has been learning “everything from figuring out where to go in the building to very important and in-depth briefings on ethics.” She told Civil Beat, “I’m taking every opportunity to meet both with our Democratic colleagues, our fellow new member-elects, as well as on the Republican side, so there have been a number of occasions to introduce ourselves to each other and get to know each other. What I have found very refreshing and exciting has been how happy everyone is to be here, how ready everyone is to get to work and really come in with a new approach to getting things done and working together.”

The Civil Beat story says that Gabbard has chosen Amy Asselbaye for her Hawai`i-based chief of staff and is yet to choose a Washington-based chief. Asselbaye was chief of staff for more than a year under Gov. Neil Abercrombie and also worked for Abercrombie for almost two decades when he represented urban O`ahu in the U.S. House of Representatives.
Gabbard’s Washington, D.C. orientation also involved a $1,500 to $2,500 a person fundraiser breakfast on Wednesday for her campaign expenses, with the keynote speaker being Gov. Neil Abercrombie. The breakfast was reported by Civil Beat and also by The Sunlight Foundation. Sunlight’s Political Party Time website at http://politicalpartytime.org reports that the breakfast was held at Hotel George and billed as Breakfast with Gov. Neil Abercrombie. Checks were payable to Tulsi for Hawai`i, PO Box 636, Annandale, VA 22003.

See more at civilbeat.com.
HAWAI`I’S UNEMPLOYMENT RATE FELL in October to more than three percent below the national 7.9 percent average and reached the lowest unemployment rate in Hawai`i since November 2008. According to statistics released yesterday by the state Department of Labor & Industrial Relations, the seasonally adjusted unemployment rate was 5.5 percent, a drop of 1.3 percentage points from 6.8 percent in October 2011. Unemployment in September fell to 5.7 percent – the lowest in Hawai`i since December 2008.

HAWAIIAN AIRLINES LOST TO DELTA AIRLINES in its quest for direct flights between Japan and Kona Airport, the airline announced yesterday. Hawaiian was attempting to fill a gap left by Japan Airlines. During bankruptcy reorganization, JAL ceased its direct flights in October 2010 after serving the market for 14 years. Hawaiian’s proposed new route, heavily lobbied by the Big Island visitor industry, would have flown between Kona International Airport and Haneda, the airport closest to Tokyo.
Delta, which was abandoning service between Detroit and Haneda, however, was allowed to switch its service to Seattle and Haneda. In addition to Hawaiian competing for the route, United Airlines wanted flights between San Francisco and Haneda, and American Airlines wanted flights between Los Angeles and Haneda. In its arguments for the route, Delta claimed that it could best serve demand on the West Coast with the flight from Seattle. Only one slot was open, and Delta won permission from the U.S. Department of Transportation.
Anyone wanting to continue the plea for the Kona route can write to the U.S. Department of Transportation by Nov. 26 and object to the decision. Objections would be answered by a Dec. 3 deadline.

ROYAL HAWAIIAN ORCHARDS released its quarterly results for the first time yesterday under its new company name. Formerly called ML Macadamia Orchards, the newly named entity plans to sell retail macadamia under its own name and to possibly open a retail operation. It is marketing its products as “better for you macadamia nut products” and plans to market them to health and nutrition foods stores and suppliers. President Dennis Simoni said, “This strategy is a highly complementary addition to our growing and processing operations. We believe we are well positioned for success in defining and penetrating a sizeable market for bulk and branded macadamia nut products targeted for health-conscious consumers.”
Royal Hawaiian Orchards is one of the larger employers in Ka`u and the world’s largest grower of macadamia nuts, owning or leasing 5,070 acres of orchards on Hawai`i Island. Its headquarters is in the historic sugar management building in Pahala.

MORE PUBLIC TESTIMONY REGARDING the proposed contract between Hawai`i Electric Light Company and `Aina Koa Pono has been received by the Public Utilities Commission.

“SOLUTION NUMBER ONE IS GEOTHERMAL, for our island and for our state. Solution number two (is) biofuels for our trucks, buses, tractors and airplanes,” writes mechanical engineer Ken Obenski, of Honaunau, in his letter to the Public Utilities Commission regarding `Aina Koa Pono’s plan to make use biomass to create biofuel at a refinery near Wood Valley Road. Obenski offered support for the project as a means to make transportation fuel, claiming that, while cars can run on battery power, “airplanes, trucks and buses though need a denser, more portable energy medium, (and) biofuels can fill that gap.”
While he supports AKP’s project for transportation fuel, Obenski said he supports geothermal energy to create electricity because it “can make other energy technologies competitive. Cheap electricity can make conversion of biomass to fuel economical.” He said that geothermal energy is cheap because “the technology is mature, not experimental. You can buy the equipment like buying a truck, or lease it. The supply is dependable, and once installed very inexpensive to operate.” He also said that geothermal “has all the advantages of fossil power, without the fuel cost or the pollution.”
In support of the biofuel project, Obenski said that “growing biofuel feedstock will support the agricultural infrastructure that can make all other farm activities more effective. Almost anything green from algae to jatropha to sugarcane to Christmasberry can be converted to a biofuel.”

“CAN THE STATE OF HAWAI`I AFFORD to use our land for fuel rather than food?” asked Pahala resident Lynn Hamilton in her letter to the PUC. “We only need to look to other areas of the world to see the result of such decisions. There are international concerns about the use of land for fuel rather than food. Hawai`i has other sources of alternative energy. If the rate payers finance this microwave catalytic depolymerization project for 20 years, will they be able or willing to finance another energy project that might appear in the future? Can we afford to take the gamble?
“Considering the cost of transportation needed in the process, the potential cost is questionable. The transportation costs would include importing and storing supplies such as fertilizer (and) tons of minerals such as zeolite which are needed daily (and) transporting feedstock from the fields to the refinery and tanker trucks traveling 71.2 miles daily to Kailua-Kona, all of which would be using petroleum.”
Hamilton said she is also concerned that transporting fuel on the two-lane road from Pahala to HELCO’s power plant in Kailua-Kona would “certainly have an economic cost to the people along the coast,” citing “the danger of accidents transporting synthetic fuel on the winding road” and “the disruption of other commerce on the road.”
“I question the financial viability, the technical viability, the wisdom of committing our state’s resource for 20 years to an untried process. We are concerned for our water, our land use, lost job opportunities, the health and safely our people both now and in the future,” she said.
PUC is accepting public testimony through Friday, Nov. 30. Email comments to hawaii.puc@hawaii.gov.

ST. JUDE’S ANNUAL HOLIDAY BAZAAR AND PLANT SALE is tomorrow from 8 a.m. to 1 p.m. at St. Jude’s on Paradise Circle in Ocean View. From Hwy 11, turn mauka on Donola Drive to Paradise Parkway.

KAUAHA`AO CONGREGATIONAL CHURCH FUNDRAISING BAZAAR is tomorrow from 9 a.m. to 1 p.m. in Wai`ohinu on Hwy 11.

KA`U SCHOOL OF THE ARTS hosts its Fall Fling tomorrow at Punalu`u Bake Shop from 9 a.m. to 4 p.m. The event includes music, hula, creative corner, talent contest and an arts and crafts sale. 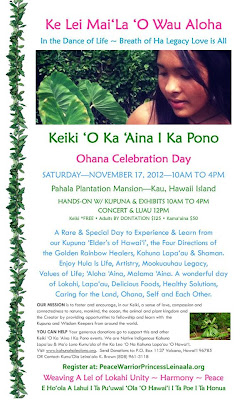 `OHANA CELEBRATION DAY takes place tomorrow at Pahala Plantation House, with exhibits from 10 a.m. to 4 p.m. and a concert and lu`au at noon. Organizer Kumu `Ola Leina`ala Brown describes the event as “a wonderful day of Lokahi, Lapa`au, delicious foods, healthy solutions, caring for the land, `ohana, self and each other.” Kama`aina rate is $50, and keiki are free. Call Brown at 961-3118 for more information.

13TH ANNUAL INVITATIONAL WREATH EXHIBIT opens to the public tomorrow at the Volcano Art Center Gallery in Hawai`i Volcanoes National Park. Gallery artists, working in a wide variety of media, materials and techniques, present their concepts of “wreath,” from the whimsical to the traditional through Sunday, Jan. 6 from 9 a.m. to 5 p.m. Park entrance fees apply. For more, visit volcanoartcenter.org or call 967-7565.

ALSO AT VOLCANO ART CENTER, Christmas in the Country begins tomorrow and continues on Sunday from 9 a.m. to 5 p.m. Special holiday celebrations include art demonstrations and print and book signings by gallery artists, plus a selection of handcrafted decorations and gifts offered only during the holiday season. The event is also held Friday, Nov. 23 through Sunday, Nov. 25 from 9 a.m. to 5 p.m. Park entrance fees apply. For more, visit volcanoartcenter.org or call 967-7565.

ALSO SEE KAUCALENDAR.COM AND FACEBOOK.COM/KAUCALENDAR.
Posted by The Ka`u Calendar at 11:33 AM Links to this post