AN EDIBLE CROPS EXTENSION SERVICE AGENT IS NEEDED FOR or West and South Hawai'i, according to a petition drive shared by University of Hawai'i Extension Agent Andrea Kawabata. The petition was created by Ken Love, President of Hawai'i Tropical Fruit Growers Association. Kawabata said Sunday that 187 have already signed and provided testimony. She explained that the new petition is securing signatures toward the hiring of an Extension Agent working with commercial edible crops producers in West and South Hawai'i Island.
The petition narrative states that "For Hawai'i to improve its position with food security and resilience, we must increase local food production and exports. However, to do this, our farmers need more support. Cooperative extension agents play an extremely critical role in conducting and extending research-based information and technologies to our farming communities and promoting good agricultural practices that directly impact and benefit producers."

The County of Hawai'i and University of Hawai'i's College of Tropical Agriculture & Human Resources are creating two extension agent positions within Hawai'i County for livestock and indigenous crops. "While support for native Hawai'i crops is important, we feel this position should also encompass and support other producers in need of extension assistance," says the petition.
It points out that the Big Island boasts the greatest number of farms and largest land mass in the state. "As such, current extension agents are stretched thin and cannot provide the much needed support that commercial farms require for success and sustainability. As such, our recommendation for the COH and UH-CTAHR is to broaden the position to include non-formal outreach (workshops, webinars, field days, presentations, farm visits, etc.) and education to tropical fruit, nut, vegetables, and herb producers in addition to indigenous crops in West and South Hawai'i, where there is a major gap in services. This commercial edible crops extension agent position would then support a greater diversity of farmers and be more efficient and effective use of county, university, federal and state monies."
The narrative urges the Ka'u agricultural community to strongly advocate for the position by signing 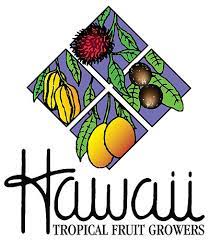 and sharing this petition and urging the COH and UH-CTAHR to highly consider this commercial edible crops position that is of critical need.
In addition to signing the petition, supporters can directly contact the Director of county Research & Development,  Douglass Shipman Adams, and UH-CTAHR's Assoc. Dean and Director of Extension, Dr. Jeffrey Goodwin, "to further explain why this position is of great importance to you, other farmers, and our community," says the narrative for the petition. The contact information is:
Douglass Shipman Adams, County of Hawaii's Director of Research and Development, 25 Aupuni Street, Suite 130, Hilo, HI 96720; (808) 961-8366, chresdev@hawaiicounty.gov.
Dr. Jeffrey Goodwin, Interim Associate Dean and Director for Cooperative Extension, 3050 Maile Way, Honolulu, HI 96822; (808) 956-8397; extad@hawaii.edu.
To read comments, add your own, and like this story, see www.facebook.com/kaucalendar. See latest print edition at wwwkaucalendar.com. See upcoming events at https://kaunewsbriefs.blogspot.com/2022/04/upcoming-events-for-kau-and-volcano.html 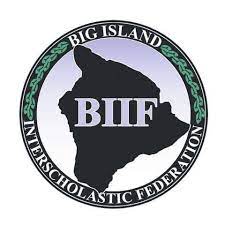 HONOKA'A WON THE BIG ISLAND DIVISION 2 CHAMPIONSHIP IN FOOTBALL. Honoka'a took down Kamehameha Schools Hawai'i on Saturday, Oct. 29 in a 19-9 win for the Dragons. Honoka'a finished the BIIF season 10-1, with two wins against Kaʻū Trojans. The Dragons head to O'ahu for the state championship.    According to BIIF statistics, the leader for the season in Kaʻū football Passing was Ocean Nihipali-Sesson. In Rushing it was Nihipali-Sesson, Vladimir Fedoruk and Chaz Kajiwara. The Receiving leaders were Toby Burgos, Tyson Kuaula-Faafia and Colin Henshaw.
To read comments, add your own, and like this story, see www.facebook.com/kaucalendar. See latest print edition at wwwkaucalendar.com. See upcoming events at https://kaunewsbriefs.blogspot.com/2022/04/upcoming-events-for-kau-and-volcano.html
LOHI GOODWIN, REPUBLICAN CANDIDATE TO REPRESENT KA'Ū into Kona in the state House of Representatives, released the following statement on Sunday: "I am a conservative who was born and raised in Hawai'i. I am a father, a USAF veteran, a husband, a homeschooler, and a Kanaka. I am running because I see a dark day coming, in which our government does not respect and honor the people (us) but wishes to dictate every facet of our lives. From taking our hard earned money from our wallets in the name of the environment, to physically assaulting our children in school with forced experimental drugs, to sexually grooming our keiki kane and kaikamahine with perverse identity lessons, to removing the rights of parents to parent their children according to the beliefs of the 'ohana. I believe these will destroy the Ohana, turn the keiki against the makua, and wreak havoc on our community.
"We see the very same people who have killed businesses, put us out of work, set our kids back in school, and forced experimental drugs (dangerous vaccines) into 'our ohana asking to be given another opportunity to drive us deeper into misery and uncertainty.
"Do we still remember what normal is? Do our kids? I am running to restore normal, when government did the will of the voters, The People, who pay them. I am still salty about not being able to attend graduation, my kids not able to attend prom, no funerals, etc… These were unnecessary, they knew it, I knew it, yet they are still trying to play the same sick game with the lives of us and our keiki. ‘Nuff Already, vote freedom on November 8th, let’s return to normal. Vote Lohi Goodwin State Representative District 5."

To read comments, add your own, and like this story, see www.facebook.com/kaucalendar. See latest print edition at wwwkaucalendar.com. See upcoming events at https://kaunewsbriefs.blogspot.com/2022/04/upcoming-events-for-kau-and-volcano.html
JEANNE KAPELA, DEMOCRATIC CANDIDATE TO REPRESENT KA'Ū into Kona in the state House of Representatives, released the following statement on Sunday: "In recent years, housing prices have skyrocketed. In some places the average cost of a single-family home has surpassed a million dollars, leaving working families unable to afford a residence in the islands.
"I'm working to fix that. We need to redefine what 'affordable housing' means in state law. Instead of giving tax breaks to developers, we should build housing for those earning no more than 60 percent of area median income and institute a vacant homes tax to target property speculation by nonresident investors.
"Additionally, I support creating a social housing model for our islands that views homes as a human right, not a market commodity. I also support strengthening protections for renters by passing a retaliatory eviction ban that prevents predatory landlords from taking advantage of their tenants.
"Finally, we need to empower nonprofit developers to create affordable housing, since they are not driven by shareholder profits. And we should implement rent control programs that limit rent increases to prices that workers can actually afford to pay without being cost burdened.
She asked voters to "Help me establish affordable housing for all who call Hawai'i home.... Our islands belong to working families, not luxury property investors. It's time for us to reclaim our housing policy for the benefit of we, the people."
SEE STATEMENT FROM MICHAEL LAST, LIBERTARIAN CANDIDATE FOR KA'Ū into Kona's state House of Representatives seat at http://kaunewsbriefs.blogspot.com/2022_10_16_archive.html
To read comments, add your own, and like this story, see www.facebook.com/kaucalendar. See latest print edition at wwwkaucalendar.com. See upcoming events at https://kaunewsbriefs.blogspot.com/2022/04/upcoming-events-for-kau-and-volcano.html
HALLOWEEN SAFETY TIPS ARE OFFERED BY HAWAI'I POLICE DEPARTMENT. "Being safe is no trick; using a few common-sense tips can help make Halloween enjoyable for everyone. The Hawaiʻi Police Department asks people to follow a few suggestions, especially on Halloween.
For tick-or-treaters: One of the most important safety tips for Halloween trick-or-treating is having adult supervision of children at all times, especially when there is vehicle traffic. Not having an adult looking out or monitoring your children may also be a violation of the law.
Another safety tip for Halloween is making sure that children's costumes are safe. Costumes should fit right to prevent tripping and heat exhaustion, should allow for clear and unobstructed vision, and be highly visible.
Parents, along with children, should have flashlights readily available to illuminate walking surfaces at night, as well as to provide a warning to motorist of your location from a greater distance. Having glow type sticks attached to your child’s costume is another way to increase their visibility at night.
Parents and trick-or-treaters should stick to trick-or-treating in neighborhoods that they are familiar with and stay away from homes with poor lighting to prevent falls and injury. Unfamiliar homes can also be dangerous as there might be dogs on the property which may bite unsuspecting children.  Once trick-or-treating is done, parents should examine the candy which their child has received to make sure it was not tampered with and is safe to eat. Parents should also stress to their kids to not eat any candy that has not been checked by them while they are trick-or-treating.
For drivers traveling on Hawai‘i Island roads: For those whodrink alcohol or consume an intoxicating substance, don’t drive. Have a sober driver or call for a ride.     Avoid using handheld electronic devices. Using an electronic device while operating a vehicle is a crime and very unsafe.
When seeing a drunk driver or impaired pedestrian on the road, contact Police Dispatch at (808) 935-3311. It’s best to provide a license plate description of the vehicle and direction of travel on the road.
Be on alert for all road users, including pedestrians, at night. Children may come from between vehicles or other unsafe locations.
Slow down in areas where pedestrians are likely to be or where sight distances are limited. Keep your windshield clean.
For pedestrians walking on this island's streets: Walk on a sidewalk if one is available. If there is no sidewalk, walk facing traffic, as far to the side as safely possible so you can move quickly out of the road if you feel threatened by traffic. Drivers do not expect to see pedestrians in the roadway or to come out from between parked cars or behind shrubbery. Expect that drivers will not see you and wait for them to pass.
Follow the rules of the road at driveways and intersections. Cross with a traffic signal if there is one, and even when having the right of way, make sure traffic has stopped or passed before stepping into the street. This will be easier to do if electronic devices do not distract from picking up visual and auditory information about traffic.
Before the Halloween festivities begin, plan a way to get home safely at the end of the night. Alcohol affects judgment, balance, and reaction time. Create a “buddy system” to get each other home safely. Walking impaired can be just as dangerous as drunk driving.
To read comments, add your own, and like this story, see www.facebook.com/kaucalendar. See latest print edition at wwwkaucalendar.com. See upcoming events at https://kaunewsbriefs.blogspot.com/2022/04/upcoming-events-for-kau-and-volcano.html. 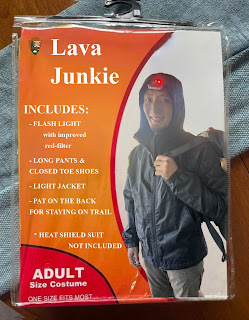 LAVA JUNKIE IS THE NAME OF THE COSTUME SUGGESTED BY HAWAI'I VOLCANOES NATIONAL PARK. The Park posted that all that's needed are:
Flashlights. Be savvy and use a red light filter on your headlamp. It helps protect native animals and fellow trick-or-treaters by not disorienting them with bright white light.
Closed-toe shoes and long pants. Whether it’s top-of-the-line hiking boots or well-worn sneakers, wear closed-toe shoes to protect you on rocky, uneven terrain.
Light jacket. Weather conditions change often and quickly at Kīlauea volcano. Be prepared for rain, wind, and low 50 °F night temperatures.
Plan B: If your preferred viewing area is packed to the gills, try another location or come back later. Your park is open 24 hours a day.
For information on eruption viewing, visit https://go.nps.gov/new-eruption.
To read comments, add your own, and like this story, see www.facebook.com/kaucalendar. See latest print edition at wwwkaucalendar.com. See upcoming events at https://kaunewsbriefs.blogspot.com/2022/04/upcoming-events-for-kau-and-volcano.html.