A WILDFIRE NEAR A POWER LINE ON THE SOUTHEAST FLANK OF MAUANA LOA within Hawaiʻi Volcanoes National Park was 70 percent contained Wednesday morning and is mapped at 42.5 acres in size. Light rain overnight and into early Wednesday morning helped firefighters extinguish residual smoldering. A statement from HVNP said the "weather outlook is favorable for firefighters to continue to make progress strengthening fire lines, mopping up, and extinguishing residual heat. As a result, containment is expected to rise significantly" Wednesday and Thursday.
Mauna Loa Road remains closed to the public from the gate at the Kīpukapuaulu parking lot. Only authorized vehicles are allowed past the gate until further notice. 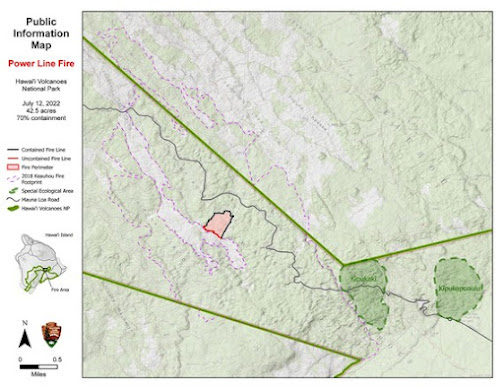 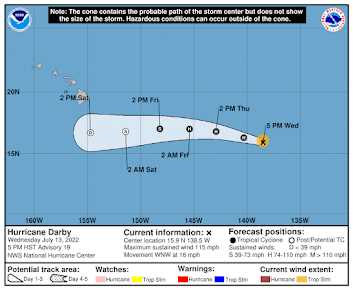 HURRICANE DARBY RESTRENGTHENED TO MAJOR STATUS on Wednesday. The 5 p.m. report from the Central Pacific Hurricane Center said the "intensity has been increased to 100 kt, making Darby a major hurricane once again. Satellite images from the past couple of hours indicated that the upper level outflow has started to become a bit asymmetric, which may indicate that Darby is starting to be affected by the large upper level trough to the northwest." The Hurricane Center predicts Darby will pass as a Depression south of Hawaiʻi Island on Saturday afternoon.
To read comments, add your own, and like this story, see www.facebook.com/kaucalendar. See latest print edition at www.kaucalendar.com. See upcoming events at https://kaunewsbriefs.blogspot.com/2022/04/upcoming-events-for-kau-and-volcano.htm.

THURSDAY NIGHT AT THE CENTER: Nietzsche’s Amor Fati and Albert Saijo’s Zensational Rhapsody will be the topic at 6 p.m. in Volcano Art Center’s Niaulani Campus in Volcano Village. Tim Freeman, Assistant Professor of Philosophy at UH-Hilo, will give a talk and audio visual presentation. The presentation was recently given in May at a philosophy conference at the University of Tallinn in Estonia. The topics addressed concern the relationship between Nietzsche’s thought and Zen, as well as the relationships between philosophy and poetry, philosophy and music, art and truth, and, as well, some thoughts on living in this perilous time of global conflict and ecological crisis. The presentation will take about 40 minutes with discussion to follow. The series is intended to inspire, enhance appreciation of art and life experience, while fostering community connections. This presentation is free, although a $5 donation is greatly appreciated.
To read comments, add your own, and like this story, see www.facebook.com/kaucalendar. See latest print edition at www.kaucalendar.com. See upcoming events at https://kaunewsbriefs.blogspot.com/2022/04/upcoming-events-for-kau-and-volcano.htm.
HAWAI'I VOLCANOES NATIONAL PARK ARTIST IN RESIDENCE BEN COSGROVE will offer a free performance this Saturday, July 16 from 2:30 p.m. in Kahuku, courtesy of Friends of Hawaiʻi Volcanoes National Park and the National Park Arts Foundation. 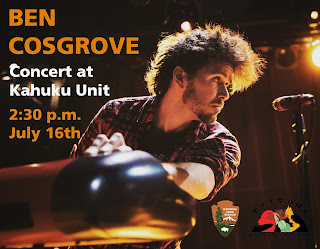 Cosgrove is a traveling musical artist and keyboardist who explores rhythms of landscape, place and environment. He performed and held fellowships at Acadia National Park, Isle Royale National Park, NASA, Harvard University and more.
Due to high infection rates of Covid-19 on island, attendance is limited to 25 people. Registration is required and is free.
Go to https://bit.ly/KahukuConcert to reserve a seat. Attendees must wear masks.
To read comments, add your own, and like this story, see www.facebook.com/kaucalendar. See latest print edition at www.kaucalendar.com. See upcoming events at https://kaunewsbriefs.blogspot.com/2022/04/upcoming-events-for-kau-and-volcano.htm.
Posted by The Ka`u Calendar at 9:22 PM