MILOLI'I SUBSISTANCE FISHING AREA RULES ARE ESTABLISHED. The state Board of Land Natural Resources approved them during its recent meeting to include: Size and/or bag limits for pāku‘iku‘i, kole, uhu, opihi, and ula; seasonal restrictions for kole, ‘ōpelu, ‘ū ‘ū, and uhu; no take of terminal males (blue) of the larger uhu species; no take of female ‘a‘ama with eggs; no take of ‘opihi kō‘ele; no commercial aquarium fishing; and specific gear and species restrictions within several sub-areas within the broader CBSFA boundary.
A statement from DLNR says "the designation is intended to ensure abundant stocks of priority species and high-quality fishing now and in the future for residents and visitors to Miloli‘i and to reaffirm and perpetuate fishing practices that were customarily and traditionally exercised for Native Hawaiian subsistence, culture, or religion along the southwest coast of Hawai‘i Island."
In 2005, Miloliʻi became the first permanent, legislatively designated CBSFA in Hawaiʻi.
Following the numerous community-led public community workshops and meetings, the DLNR Division of Aquatic Resources conducted statewide public scoping last December.
In testimony before the land board, DAR Administrator Brian Neilson said, “The Miloliʻi CBSFA is an excellent example of the interweaving of traditional and modern scientific knowledge and improving DLNR’s and the community’s capacity to co-manage the State’s public trust resources.”
The DLNR statement says, "The nearshore ecosystems of the South Kona coast of Hawaiʻi Island teemed with life and abundance which supported pockets of human settlements over the last 500 years. The fishing families of Miloliʻi have continued these traditions and refer to Miloliʻi as their icebox."
Billed as The Last Fishing Village in Hawai‘i, the coastal areas surrounding Miloli‘i are one of the last pockets in the state where traditional Hawaiian fishing practices have been preserved and are still practiced today. Unique to Miloliʻi and other South Kona communities is the documented relatively high number of villagers who noted fishing as their primary occupation.
BLNR Chair Suzanne Case commented, “This has been a long road for the people of Miloli‘i, but they persevered, and the designation of the CBSFA will ensure long-term sustainable populations of fish and other marine species and encourage the scientific study and understanding of subsistence fishing management.”
DAR staff worked closely with the Miloliʻi-based community group, Kalanihale, to develop rules to meet these goals.
Kalanihale did considerable outreach work to gather support for these rules from members of the Miloliʻi community and other stakeholders in the South Kona area.
“The community really embraced the concept of community-based. While a few people objected to some of the specific rules, the strong majority of people who offered comments during public hearing and scoping meetings supported CBSFA designation. This includes many young people, and their statements were often the most moving and meaningful, which shows this community is dedicated to preserving its way of life now and in perpetuity,” said Neilson.
To read comments, add your own, and like this story, see www.facebook.com/kaucalendar/. See latest print edition at www.kaucalendar.com. See upcoming events at https://kaunewsbriefs.blogspot.com/2022/04/upcoming-events-for-kau-and-volcano.html.
THE PORTUGUESE CHAMBER OF COMMERCE, which has held events in Kaʻū, has announced that construction of its Portuguese Cultural & Educational Center will begin soon. Dr. Marlene Hapai, who has carried the torch for the progress for many years, said the location will be in Hilo at Komohana and Ponohawai Streets. She is President and Executive Director for the Center.
Architect is Blaise Caldeira who is volunteering for the project. General Contractor is Hardwood Pacific.
The Center will be a hot topic at the Summer Festa Saturday at Mo'oheau Bandstand in Hilo from 9 a.m. to 2 p.m. The event is sponsored by the Portuguese Chamber. On hand will be Darlyne Vierra and the Kaʻū Multicultural Society with its display of Portuguese heritage in Kaʻū.              Before Covid, Hapai traveled around the island from community to community on her mission. In September of 2018, she participated in the celebration of the 140th Anniversary of the first Portuguese arriving to this island. Many Kaʻū residents participated, displaying historic photos and treasures of the culture at Pāhala Community Center.
On display were the handicrafts of the Portuguese, who introduced and made ʻukulele in Hawaiʻi. Also known for fine hand stitching, the Portuguese made purses, clothing, and table covers, and carved wooden objects, some of them on display from generations ago. Also famous and embedded in Hawaiian culture is the Portuguese oven and its sweetbread.
A collection of Portuguese family photos from Kaʻū came from Darlyne Vierra and the Kaʻū Multicultural Society, showing off the many skills in the community, from cowboy to sugar worker and supervisor, from dairy owner to rancher. A tree with paper hearts imprinted with Portuguese family names honored those who came here and settled.
Music came from Sophia Hanoa, who played guitar and sang Portuguese songs. There was a Portuguese pork dish served on Portuguese bread.
The famous Portuguese sweetbread was on sale, along with decorative shirts celebrating Portuguese history in Hawaiʻi.
The first Portuguese coming here sailed to Hawaiʻi on a journey that took them across the Atlantic, around the southern point of South America, and across the vast Pacific to their new island home. The first ship Priscilla arrived Sept. 30, 1878, with 120 Madeira Islanders. The second ship left Funchal on April 23, 1879, took exactly four months to cross the Atlantic Ocean, round Cape Horn, and sailed across the Pacific to Honolulu.
Among the passengers were Manuel Nunes, Augusto Dias, Jose do Espirito Santo, and Joao Fernandes, who are credited with introducing the ʻukulele to Hawaiʻi. Many of the Portuguese settlers worked at the sugar companies in Kaʻū. They became ranchers, paniolo and leaders in the Catholic Church. Portuguese names, like Amaral, Andrade, Baruz, Da Silva, De Silva, Enos, Fontes, Freitas, Francis, Frances, Gomes, Gouveia, Joseph, Lorenzo, Louis, Manoa, Marques, Medeiros, Manuel, Oliveira, Pedra, Pestano, Silva and Vierra are well known in Kaʻū, with many families of Hawaiian and Portuguese ancestry.
To read comments, add your own, and like this story, see www.facebook.com/kaucalendar/. See latest print edition at www.kaucalendar.com. See upcoming events at https://kaunewsbriefs.blogspot.com/2022/04/upcoming-events-for-kau-and-volcano.html. 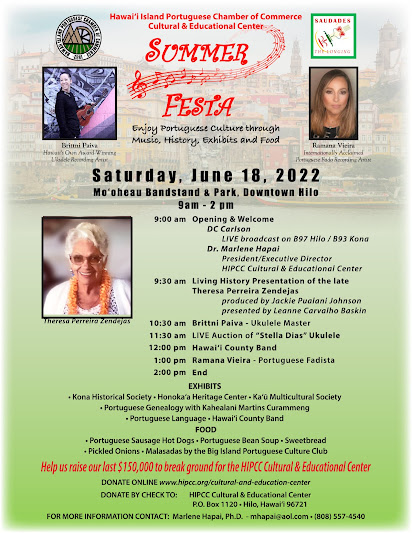 VOLCANO VILLAGE FOURTH OF JULY PARADE welcomes walking and riding groups and individuals. It is sponsored by Volcano Community Association in Volcano Village from 8:30 a.m. to 1 p.m. The Monday, July 4 parade starts at the Post Office at 9 a.m. and ends at Cooper Center on Wright Rd., followed by Cooper Center’s Independence Day celebration packed with live entertainment, craft and food vendors, keiki games and a large silent auction from 9 a.m.to 11:30 a.m. Parking maps can be found at www.thecoopercenter.org. (No parking at Cooper Center except handicap permitted vehicles with prior reservation.)
SPONSOR A BUCKLE, VOTE FOR RODEO QUEEN ahead of the Saturday, July 9 Rodeo sponsored by Kaʻū Roping & Riding Association and ʻO Kaʻū Kākou. Event to be held on the rodeo grounds behind Nāʻālehu Park. Call 808-854-7917. 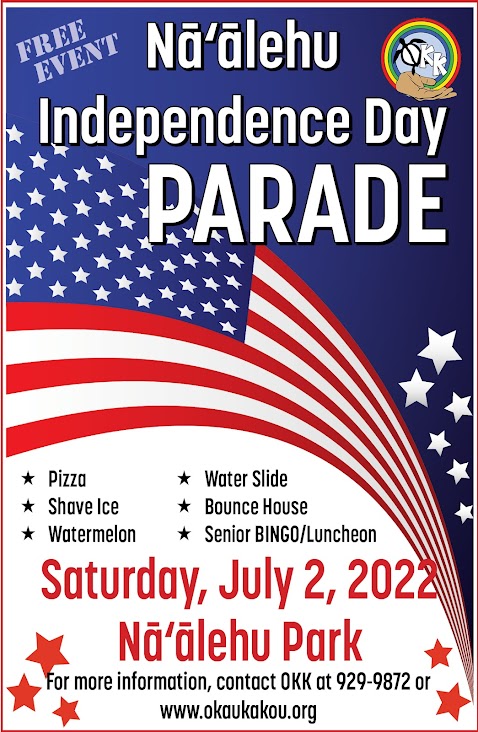 BECOME A VENDOR AT THE 3RD ANNUAL EXPERIENCE VOLCANO FESTIVAL on Saturday, July 30th and Sunday, July 31st from 10 a.m. to 4 p.m. each day. Last year, over 2,500 visitors attended and over 40 events were featured during the EVH festival. All vendor spaces are $50 for both days of the festival. Sign up as a vendor or a sponsor at experiencevolcano.com. If you have questions, contact experiencevolcano@gmail.com.
SIGN UP FOR KAʻŪ COFFEE TRAIL RUNS with a change of date from July 3 to Sept. 17. Registration deadline for the annual event is Sept. 14. Organized by Hawaiʻi Island Racers, the 50K begins at 6 a.m., Half Marathon at 7 a.m., and 5K at 7:15 a.m., all starting from Kaʻū Coffee Mill at 96-2696 Wood Valley Road in Pāhala. Proceeds go to support ʻO Kaʻū Kakou. For more details on the event and registration fees, visit https://www.kaucoffeetrailruns.com/.
See The Kaʻū Calendar June Edition at www.kaucalendar.com
SEE UPCOMING EVENTS IN KAʻŪ & VOLCANO
at https://kaunewsbriefs.blogspot.com/2022/04/upcoming-events-for-kau-and-volcano.html 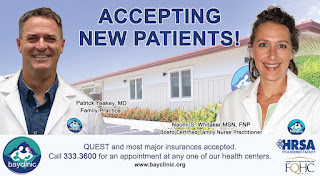