THE FIRST-EVER PACIFIC ISLANDS COUNTRY SUMMIT, hosted this week by the U.S. President in Washington, D.C., was important in "enhancing connectivity and mutual aid, addressing climate change and meeting the geopolitical challenge of China,” according to Hawa'i Congressman Ed Case. He said, “Our country’s interests, and in fact our future, hinge on how we formulate, advance and strengthen our role and relationships in the Pacific.”
Attending were leaders from: Cook Islands, Federated States of Micronesia, Fiji, French Polynesia, Nauru, New Caledonia, Palau, Papua New Guinea, Republic of the Marshall Islands, Samoa, Solomon Islands, Tonga, Tuvalu, Vanuatu, and the United States of America. 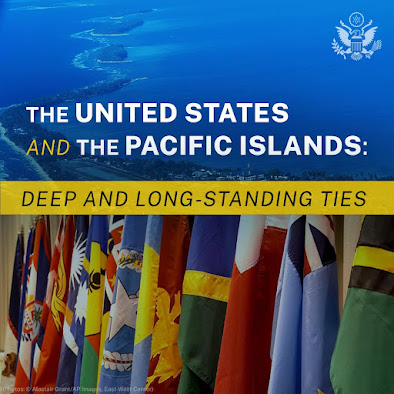 During the summit, Pres. Joe Biden told the leaders of Pacific Island nations, “The security of America, quite frankly, and the world depends on your security and the security of the Pacific Islands.” He committed to returning the Peace Corps to Pacific Island nations, including Fiji, Tonga, Samoa and Vanuatu, and to establish U.S. embassies in Kiribati, Solomon Islands and Tonga. U.S. investments would go to battling climate resilience, maritime security, developing tourism, digital connectivity and law enforcement training.
The effort is in part to offset the influence of China, which has been investing heavily into the economies of the Pacific Island nations.
The Guardian reported a letter to the U.S. Administration from ambassadors attending the summit representing Federated States of Micronesia, the Republic of the Marshall Islands and the Republic of Palau asking for more help, particularly with climate change. The Guardian reported the letter saying the "primary point is that this [climate change] is our hottest and most important topic. We are unable to solve climate change, and unable to provide for our citizens’ education and health needs, unless and until these negotiations conclude, and conclude in such a manner that genuinely meet our development needs....The gaps between the needs of our peoples and what has been offered are narrowed, but are far from closed."
Case noted that Hawai'i "serves as our gateway to the Pacific and Asia and is critical to the defense posture of our country in our half of the world. Hawai‘i will continue to have a unique role in the Pacific because of the values, history and identify we share with the rest of our island ‘ohana.”
As a member of the House Appropriations Committee, Case has won Congressional approval for many initiatives focusing on Asia and the Pacific, including funding that includes: Millions for the Pacific Deterrence Initiative, in part to strengthen America’s contributions to Pacific Islands security-related concerns; $19.7 million in further federal funding for the East-West Center to advance Hawai‘i’s leadership role in the Indo-Pacific; and $4 million for the Defense Security Cooperation Agency’s Regional Centers. This funding will help expand the work of the Daniel K. Inouye Asia-Pacific Center for Security Studies.
On July 25, 2019, Case co-announced the formation of the first-ever Congressional Pacific Islands Caucus, which he serves as co-chair, saying, “I have been convinced for some time that our country’s and world’s future are in the Indo-Pacific, and the islands of the Pacific are a key yet too-often overlooked part of that region.” On July 30, 2020, Case co-introduced the BLUE Pacific Act, focusing on security, development and shared values.”
Case and congressional colleagues urged the Administration to prioritize negotiations with the Freely Associated States of Micronesia and the Republic of Palau. The letter stated that “Compacts of Free Association, their subsidiary agreements and enacting legislation define a decades-old special and mutually beneficial relationship and provide our country with valuable economic and security benefits.” Case also pointed to a report released this month by the U.S. Institute of Peace, entitled China’s Influence on the Freely Associated States of the Northern Pacific.” It says that since achieving full sovereignty in the late 1980’s and early 1990’s “the FAS have considered the United States their most important partner on economic and security issues. However, in the last decade, and especially the last five years, China’s role in the region has grown.”
On April 8 to 14, Case joined a Congressional delegation with stops in the Philippines and Papua New Guinea to foster and strengthen ties between the United States and the two countries, and attended the Our Ocean Conference in Palau. 5. On May 17, in testimony before the House Committee on Appropriations Subcommittee on State and Foreign Operations, Case said “we have made progress through renewed diplomatic and other efforts to engage Pacific leaders, including Secretary Blinken’s and Congress’ own travels to the region. However, without funding to support specific initiatives, visits alone and promises made will ring hollow. Now is the time to ensure that our foreign policy budget reflects the importance of our ties to the Pacific Islands and our support for a secure and stable Indo-Pacific, committed to an order based on mutual respect, cooperation and freedoms."
To read comments, add your own, and like this story, see www.facebook.com/kaucalendar. See latest print edition at wwwkaucalendar.com. See upcoming events at https://kaunewsbriefs.blogspot.com/2022/04/upcoming-events-for-kau-and-volcano.html.
HAWAI'I SHOULD RECEIVE AN EXEMPTION FROM THE JONES ACT, according to an opinion piece issued Saturday by Grassroot Institute of Hawai'i leader, Keli'i Akina: 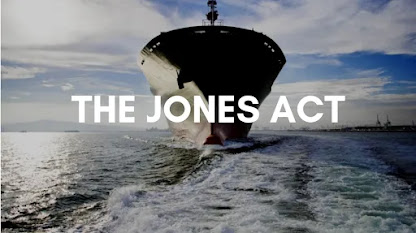 Watching the controversy unfold over the delivery of fuel to hurricane-ravaged Puerto Rico has been especially poignant to those of us who live in Hawai'i. It's hard not to look at the delay, political gamesmanship and dueling press statements and wonder how long it will be until Hawai'i is in a similar situation.
As you may be aware, Puerto Rico was hit by Hurricane Fiona on Sept. 18. The storm killed 21 residents, caused serious flooding and left approximately 1 million people without electricity. The island is still recovering from the damage caused five years ago by Hurricane Maria, and it was immediately evident that Puerto Rico would need significant aid and support.
Disaster relief has been finding its way toward the beleaguered territory, but an old barrier we in Hawai'i are all too familiar with is once again blocking the delivery of necessary goods: the 1920 Jones Act. This blatantly protectionist federal maritime law requires that all goods shipped between American ports be on ships that are U.S. built and flagged and mostly owned and crewed by Americans.
The effect of the law on Hawaii and Puerto Rico — both of which are heavily dependent on waterborne imports — is to make goods more expensive and inhibit economic growth. Worse, when there is an emergency, aid is restricted to the few ships that meet Jones Act requirements. All of which explains why a ship carrying 300,000 barrels of essential diesel fuel from Texas sat off Puerto Rico's coast earlier this week, legally unable to dock.
Why? Because the ship was not Jones Act compliant. For days, the ship sat there, a symbol of the Jones Act's failure, while politicians, lobbyists, activists and maritime experts argued over whether the Biden administration should allow it to dock and unload its cargo. Even before the issue of this one ship arose, prominent voices nationwide were calling for a general Jones Act waiver for Puerto Rico.
As president of the Grassroot Institute of Hawaii, I wrote President Joe Biden asking him to authorize a one-year Jones Act waiver for the territory. In Congress, both Republican and Democratic senators and representatives added their voices. The New York City Council called for a general exemption. And so did the editorial boards of The Boston Globe, The Washington Post and The Wall Street Journal, among many others in the media.
When the issue of the one fuel tanker took center stage, even more people stepped forward. So why the delay in granting the waiver? Because the Biden administration has repeatedly proclaimed its support for the Jones Act — and the corporations and unions that support the law are well-heeled and highly focused on protecting their turf. But public pressure kept intensifying. So on Wednesday, after days of dispute, Homeland Security Secretary Alejandro Mayorkas granted a "temporary and targeted" waiver so the Marshall Islands-flagged vessel could deliver the fuel.
The action confirmed that the Jones Act hurts people who need aid. If the Jones Act worked, there would be enough ships and enough maritime workers to deliver help in a crisis. It doesn't and there aren't. If the Jones Act worked, issuing waivers for areas with emergency needs — like Puerto Rico after a hurricane or the New England states trying to ensure sufficient liquid natural gas for the upcoming winter — wouldn't become a nightmare of political wrangling and bureaucracy.
As this latest incident demonstrates, ordinary people suffer while lobbyists claim that the domestic merchant fleet will crumble if a foreign-built ship is allowed to deliver American fuel to Americans who were hit by a natural disaster.
Reams of research produced by the Grassroot Institute of Hawaii and other organizations has shown that the Jones Act has failed to achieve its stated goals of boosting America's maritime industry and protecting national security.
Yet, this law — crafted for long-ago era — continues to cause real harm to Puerto Rico. We in Hawai'i should be watching carefully, because one day we might be the ones begging for a waiver that will help us power our hurricane-ravaged communities. We should not wait for an emergency to start working to protect ourselves. Lawmakers at every level of government in Hawai'i should be doing what they can now to update the Jones Act for the 21st century.
To read comments, add your own, and like this story, see www.facebook.com/kaucalendar. See latest print edition at wwwkaucalendar.com. See upcoming events at https://kaunewsbriefs.blogspot.com/2022/04/upcoming-events-for-kau-and-volcano.html.
EASTERN TIP OF SOUTH POINT IS IN EXTREME DROUGHT, EAST KAʻŪ IS EXPERIENCING MODERATE DROUGHT while west Kaʻū is Abnormally Dry, according to the U.S. Drought Monitor analysis released on Friday. None of the island is receiving its normal rainfall. The Severe Drought at Kalae means pasture conditions are poor and fire risk is high, according to the federal report.
To read comments, add your own, and like this story, see www.facebook.com/kaucalendar. See latest print edition at wwwkaucalendar.com. See upcoming events at https://kaunewsbriefs.blogspot.com/2022/04/upcoming-events-for-kau-and-volcano.html.