MILO IS PLANT OF THE MONTH for The Ka'ū Calendar column Lāʻau Letters: Native Plants of Kaʻū. The monthly article shares information on Kaʻū's native plants and their moʻolelo (stories), uses, preferred habitats, and opportunities to adopt them for stewardship. This column by Jodie Rosam with art by Joan Yoshioka seeks to encourage making new plant friends and to reunite with others.
Milo, Thespesia populnea, is celebrated in the Hawaiian language: He milo ka lāʻau, mimilo ke aloha.
"Milo is the plant; love goes round and round." –ʻŌlelo Noʻeau No. 818 (Mary Kawena Pukui, 1983)
Description: Milo is a small tree or shrub in the Mallow or Malvaceae family, much like its cousins hau and maʻo hau hele. As a long-lived tree species, milo can reach a spread of 30 - 40 feet at maturity, though in Kaʻū, we typically see them slightly smaller. The leaves are a glossy yellow to dark green, and the typical hibiscus-shaped flowers open bright yellow in the morning and turn to shades of orange in the evening. 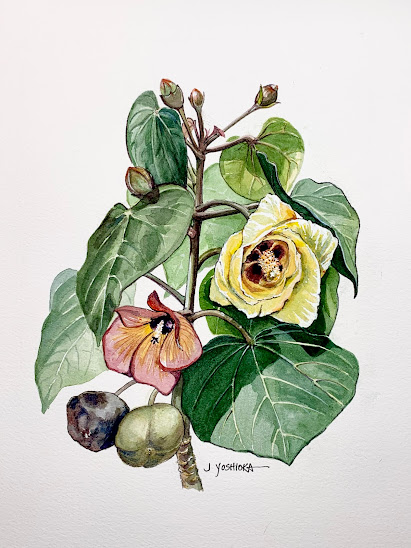 Both the fruits and gray, papery seed capsules are salt tolerant and can germinate after a year of floating at sea, which is why milo is found along coastlines across the Pacific. Milo is referenced in the Kumulipo (Hawaiian Creation Chant): Born is the Laumilo eel living in the sea. Guarded by the Milo tree living on land.
Uses: Milo's uses are nearly endless - it is no wonder why it was brought to Hawaiʻi Nei. The wood was prized for making ʻumeke (food bowls and calabashes), pā (platters), and even small canoes, and is still used in woodworking today. Cordage can be made from the fibrous inner bark, and the fruits make a lovely yellowish-green dye, as well as produce an oil with medicinal antiseptic qualities. The green fruits and young leaves are considered to be edible when cooked and of course, milo trees offer protection from the sun and salt spray along the coastline.
Habitat: In Hawaiʻi, milo is found across all of the main islands (except Kahoʻolawe) and grows at sea level to about 900' elevation, though it could probably be planted even higher. Milo tolerates light or heavy soils and thrives in sand and even volcanic substrates. It loves coastal sites near streams and estuaries which are exposed to tidal influence and can even tolerate the occasional inundation, and thrive in brackish water pools. In Kaʻū, milo thrives along the shoreline across the entire district!
Growing and Purchasing: Milo is easy to care for and can be an excellent tree for properties that constantly battle wind (and even salt spray). It is easy to propagate from the plentiful seeds it produces year-round (look on the ground under your favorite milo tree). The steps are simple: visit a milo and say hello, collect a seed capsule, dry it in the sun, open it up to remove the seeds, and plant them! Alternatively, bare root seedlings (which are also often found under mature milo trees) can also be collected to expedite the process. Your milo will be ready to put into the ground (full sun, please) once they reach about 12" tall and have been hardened in their new home.
About the artist: Joan Yoshioka says she is a conservationist at heart and has dedicated her life to preserving the native plants and animals of Hawaiʻi through her work with federal, state, and private organizations over the past 30+ years. She describes herself as an outdoor-lovin' optimist, biologist/botanist, and habitual creator of art-stuff. She says the key to our most fundamental and truest part of ourselves is found in nature and she constantly draws on it for inspiration.
About the author: Jodie Rosam says she has a deep love for native plants and a passion for exploration, with over 15 years of experience in working in the restoration of Hawaiʻi's forests. As a mother and an educator, she says the next generation has the power to lead the world to a sustainable future, and is committed to teaching her children (and others) from a place-based perspective.
To read comments, add your own, and like this story, see www.facebook.com/kaucalendar. See latest print edition at www.kaucalendar.com. See upcoming events at https://kaunewsbriefs.blogspot.com/2022/04/upcoming-events-for-kau-and-volcano.htm
TWO MEN FROM HAWAIʻI HAVE RECEIVED THE MEDAL OF HONOR from Pres. Joe Biden. Both fought in the Vietnam War. Sen. Mazie Hirono, member of the Senate Veterans' Affairs Committee, released a statement on Monday calling Staff Sergeant Edward N. Kaneshiro and Specialist five Dennis M. Fujii "heroes to this country." She pointed to " their brave and selfless actions during the Vietnam War. I'd like to extend my aloha and gratitude to them both for their service and sacrifice."
Hirono said she talked to Fujii last week to congratulate "and personally thank him for his service to our
country. Servicemembers like Mr. Fujii and Mr. Kaneshiro risk their lives to protect our nation, and we have an obligation to support them following their service. I am committed to continuing my work to ensure every veteran in Hawaiʻi and across the country has access to the health care, resources, and benefits they deserve."
Fujii received the Medal of Honor for acts of gallantry and intrepidity above and beyond the call of duty while serving as crew chief aboard a helicopter ambulance during rescue operations in Laos and the Republic of Vietnam from February 18 – 22, 1971. During a mission to evacuate wounded Vietnamese military personnel, Fujii's medevac helicopter took on enemy fire and was forced to crash land. Although injured, he waved off a rescue from another helicopter and remained behind as the only American on the battlefield. During that night and the next day, although wounded, he administered first aid to allied casualties. For more than 17 hours, he repeatedly exposed himself to hostile fire as he left the security of his entrenchment to better observe enemy troop positions and to direct air strikes against them until an American helicopter could attempt to airlift him from the area. Upon completion of his tour, he joined the Army Reserve and currently resides in Hawaiʻi.
Kaneshiro received the Medal of Honor posthumously for acts of gallantry and intrepidity above and beyond the call of duty while serving as an infantry squad leader near Phu Huu 2, Kim Son Valley, Republic of Vietnam, on Dec. 1, 1966. He and his team entered the village of Phu Huu 2 while on a search and destroy mission and were attacked by North Vietnamese. Kaneshiro destroyed one enemy group with rifle fire and two others with grenades, which enabled the orderly extrication and reorganization of the platoon and ultimately led to a successful withdrawal from the village. He served in Vietnam between July 18, 1966, until his death on March 6, 1967, as a result of a hostile gunshot wound.
To read comments, add your own, and like this story, see www.facebook.com/kaucalendar. See latest print edition at www.kaucalendar.com. See upcoming events at https://kaunewsbriefs.blogspot.com/2022/04/upcoming-events-for-kau-and-volcano.htm
INDIGENOUS DISPUTE RESOLUTION PRACTICES FROM AROUND THE WORLD is the topic of the non-profit Ku‘ikahi Mediation Center's free talk on July 21 as part of the Finding Solutions, Growing 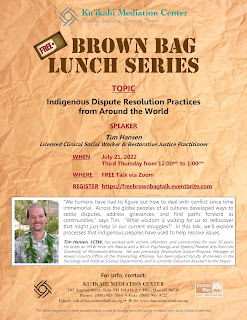 Peace Brown Bag Lunch Series. Talks are Third Thursdays from noon to 1 p.m. via Zoom.
This month’s speaker Tim Hansen said, "We humans have had to figure out how to deal with conflict since time immemorial. Across the globe peoples of all cultures developed ways to settle disputes, address grievances, and find paths forward as communities. What wisdom is waiting for us to rediscover that might just help in our current struggles?"
In this talk, participants will explore processes that indigenous peoples have used to help resolve issues.
Hansen has worked with victims, offenders, and communities for over 30 years. He holds an MSW from UH-Manoa and a BA in Psychology and Speech/Theatre Arts from the University of Minnesota-Winona. He was previously Restorative Justice Program Manager at Hawaiʻi County Office of the Prosecuting Attorney, has been adjunct faculty at UH-Hilo in the Sociology and Political Science Departments, and is currently Executive Assistant to the Mayor.
Ku‘ikahi’s Brown Bag Lunch Series is free and open to the public. Attendees are encouraged to enjoy an informal and educational talk-story session and connect with others interested in Finding Solutions, Growing Peace. To get the Zoom link, register online at https://freebrownbagtalk.eventbrite.com.
For more information, contact Ku‘ikahi Mediation Center at (808) 935-7844 or info@hawaiimediation.org. Or visit www.hawaiimediation.org.
This lunch-and-learn series is made possible in part to funding from the County of Hawai‘i and Hawai‘i Island United Way.
To read comments, add your own, and like this story, see www.facebook.com/kaucalendar. See latest print edition at www.kaucalendar.com. See upcoming events at https://kaunewsbriefs.blogspot.com/2022/04/upcoming-events-for-kau-and-volcano.htm
Posted by The Ka`u Calendar at 12:40 AM