A VISIT TO MILOLI'I BY THE GOVERNOR THIS WEEK CELEBRATES THE NEW COMMUNITY BASED SUBSISTENCE FISHING AREA. On Tuesday, with the stroke of a pen in front of Miloli'i residents, Gov. David Ige signed administrative rules to make the coastline bordering this remote village the second Community-Based Subsistence Fishing Area in the state. A long time in the making and supported by the persistence of residents, the Miloli‘i CBSFA aims to protect and conserve fish populations and their habitats, by combining traditional Hawaiian fishing practices with modern approaches to conservation.
Act 271, enacted by the Hawaiʻi Legislature in 1994, led to the designation of 18-miles of coastal waters along the rugged coastline on either side of the small community as the first permanent, legislatively designated CBSFA. Years of work by dedicated community members, with support from biologists and staff at the DLNR Division of Aquatic Resources and research and non-governmental organizations, led to the development of a set of administrative rules designed to ensure abundant stocks of priority species and high-quality fishing now and into the future.
Laila Kaupu, a fifth generation Miloli‘i fisher, was one of the prime movers behind the CBSFA initiative and headed up the community group, Kalanihale, which was instrumental in the development of the rules.
On Tuesday, following a boat tour and snorkel with the Governor and First Lady Dawn Amano-Ige, Kaupu let out a happy sigh and said, “That’s my feeling and I’ve got a feeling our kupunas are feeling the same. Just a lot of relief knowing that the community came together in its efforts, with the support of state and federal agencies. We can be that shining light that the governor mentioned for other coastal communities.”
In remarks before signing the administrative rules into law, the Governor said, “We need young people to carry this work forward and encourage other communities to create community-based subsistence fishing areas for the benefit and future of the entire state. Miloli‘i is a shining example of how we can all work together for the benefit of our marine resources, our keiki and our kupuna.”
State Department of Land & Natural Resources Chair Suzanne Case added, “This has indeed been a long road for Miloli‘i, but you all have persevered. We join you today in celebrating this tremendous achievement and remind us all, that the work has just begun in implementing these rules to manage Miloli'i’s resources. Here, and across the state we face immense challenges due to climate change, over-fishing and other ecosystem stressors. This is a giant step in the right direction, and we are grateful for such dedicated partners, rooted in tradition, with the goal of co-management of nearshore resources.”
In 2015, also during the Ige Administration, the Hāʻena CBSFA was established on Kauaʻi. In 2016 the Kaʻūpūlehu “Try Wait” community-led marine rules on Hawaiʻi Island were passed. These communities, with Miloliʻi, "have inspired communities statewide to propose rules with the DAR to sustain Hawaiʻi’s marine resources," says a statement from DLNR.
After his snorkeling expedition at Miloli'i, the Governor said, “It’s beautiful being out in the ocean and being able to see the coral colonies. It’s a spectacular day.”
To read comments, add your own, and like this story, see www.facebook.com/kaucalendar. See latest print edition at wwwkaucalendar.com. See upcoming events at https://kaunewsbriefs.blogspot.com/2022/04/upcoming-events-for-kau-and-volcano.htm

HIGH PATIENT CENSUS AT KAʻŪ HOSPITAL'S SISTER FACILITY IN HILO is the word from spokesperson Elena Cabatu. She sent out a report on Thursday saying that for the past two to three months, Hilo Medical Center has been experiencing high patient census and "operating above our capacity. Today, we started with a very full hospital with 13 holds in the Emergency Department, 13 patients in our overflow areas and 37 waitlisted patients."

She said she will provide updates on the hospital two to three times per week "to keep our staff and community informed." 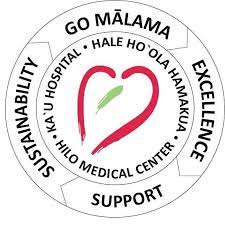 Cabatu said multiple factors "are causing our hospital to be very full." They include: a continuous flow of sicker patients seeking care for a variety of issues, including COVID; long-term care facilities on island with limited capacity to accept hospital patients due to staffing shortage and COVID outbreaks; difficulty in discharging patients resulting in high number of waitlisted patients remaining in hospital beds; and fewer open beds leading to holding patients in the Emergency Department waiting for a bed to open.
To accommodate the high patient census, Hilo Medical Center has opened additional beds in the Extended Care Facility; uses overflow beds in other patient care areas such as OB Unit, Short Stay and Recovery; offers overtime to staff and brings in traveler to staff additional beds; has doubled enrollment for its Nurse Residency Program to train 45 new nurses; has launched a paid Nurse Aide Training Program; and encourages staff to enroll in a Critical Care Nurse Training Program to help care for sicker patients. View a Town Hall Meeting on the subject at https://youtu.be/lePA4Cpev80. Learn about opportunities to enroll in the paid Nurse Aid Training Program at http://kaunewsbriefs.blogspot.com/2022_07_26_archive.html

THE COUNTY INVITES THE PUBLIC TO AN UPDATE ON CLOSURE OF PĀHALA AND  NĀ’ALEHU LARGE-CAPACITY CESSPOOLS. The public informational meeting will be at 6 p.m. Wednesday, Aug. 31 at Nā‘ālehu Community Center, 95-5635 Māmalahoa Highway.
The meeting will cover the Administrative Order on Consent recently signed by the County and the U.S. Environmental Protection Agency, which is posted at https://www.epa.gov/uic/closure-cesspools-pahala-and-naalehu-administrative-order-consent-county-hawaii, and answer questions about potential impacts to residents resulting from compliance with the order. See a story on the evolution of the plans at http://kaunewsbriefs.blogspot.com/2022_07_30_archive.html.

The county's Deputy Director of Environmental Management, Brenda Iokepa-Moses, said the public gathering will include "updates since our meeting in Pāhala on March 16, 2022, on the different options under consideration for wastewater treatment as a result of the cesspool closures. County representatives will explain requirements of the Administrative Order on Consent, and also provide an opportunity for the public to ask questions and provide comment." See story on the March 16 meeting at http://kaunewsbriefs.blogspot.com/2022_03_16_archive.html.
The county is expected to present its idea of switching from lagoon style wastewater treatment to individual wastewater systems.

A NEW PRUNING METHOD PUBLICATION FOR COFFEE LEAF BORER AND LEAF RUST has come from University of Hawaiʻi at Mānoa College of Tropical Agriculture & Human Resources. The pruning methods for Hawaiʻi coffee growers aim to to mitigate the effects and further spread of these devastating stressors. Coffee Leaf Rust and the Coffee Berry Borer were identified in Hawaiʻi in October 2020 and August 2010, respectively. See the U.H. publication. The updated publication can be found at: at https://www.ctahr.hawaii.edu/oc/freepubs/pdf/PD-126.pdf.

To read comments, add your own, and like this story, see www.facebook.com/kaucalendar. See latest print edition at

A POLICE OFFICER'S RESPONSE IN VOLCANO netted him an Officer of the Month Award. Officer Michael Sailer is honored "for his exceptional investigative police work and lifesaving efforts during an incident involving the kidnapping and torture of a male victim," says the statement from Hawaiʻi Police Department. He received the Officer of the Month commendation from the Aloha Exchange Club of East Hawai‘i during a ceremony Thursday, July 14.
A four-year veteran of the department, Sailer responded to a report of a dispute at a residence in Volcano on Tuesday, June 7. According to the statement from HPD: Upon arrival, the officer began
searching the area initially making a loud announcement of police presence. "He heard a male yelling for help one time then it became quiet. Officer Sailer continued calling out 'police!' for several minutes with no response. In the quiet, Officer Sailer could hear heavy breathing coming from inside the residence.

"Officer Sailer again called out 'police!' and observed what appeared to be a small amount of blood on the front door. While at the front door, he called out “police!” again and a teenage male answered the door. The officer noted that the male was wearing gloves and could hear a man yell for help from inside the residence.
"Asking the teen to step out from the residence, Officer Sailer entered the front room and discovered a man lying on the floor handcuffed with his feet zip-tied and a second man kneeling on top of the male victim. In addition to having his hands and feet restrained, the victim had a rag partially stuffed in his mouth and duct taped. The man kneeling on the victim told officers that there was a restraining order and that the tied up male had broken the law."
After securing the residence, Sailer found tactical gear, an assault rifle, a pistol, ammunition, and evidence of a kidnapping and assault that had taken place in the residence. "In the course of investigation, the officer officer discovered that the victim had been held against his will within the residence and assaulted. It appeared that the two males in the residence may have intended on killing the victim and covering up the incident." Police charged both with a variety of crimes, including kidnapping and assault.
The HPD statement says, "Sailer’s perseverance to uncover what had transpired that evening in Volcano resulted in him interrupting a potential homicide in the making. Through his efforts, a life was saved, two violent suspects were apprehended, and multiple firearms were safely recovered."
Every month Aloha Exchange Club of East Hawai‘i honors a Police Officer of the Month. Officers are nominated by their supervisors. All officers selected for Officer of the Month are eligible to be selected as the Aloha Exchange Club of East Hawai‘i Officer of the Year.
Posted by The Ka`u Calendar at 8:30 PM