SUBARU TELESCOPE CAME TO NĀ'ĀLEHU SCHOOL with outreach education this summer. Designed by Subaru Telescope to bring astronomy and STEM education to students and communities across Hawai‘i Island, the new Subaru Stars program held its first event at Nā‘ālehu Elementary School this summer in partnership with the Hawai‘i Science and Technology Museum.
More than 50 Nā‘ālehu Elementary students, faculty and administrative staff enjoyed a morning of hands-on, engaging activities to ignite an interest (and perhaps a future career) in astronomy, science, technology, engineering and mathematics-related fields. Representatives of Subaru Stars said they plan to expand the traveling program to more rural areas this fall and will hold events in larger populated areas throughout the year as well.  “Because of the size and geography of Hawai‘i Island, our rural communities often don’t have the same access to enrichment programs available in areas such as Hilo and Kailua-Kona,” said Subaru Telescope senior outreach specialist Christian Wong. “We’re developing this program in partnership with our local schools to see how we can best serve their needs. The pandemic has been extremely difficult on all of us, particularly our keiki and their teachers. Many of our Hawai‘i Island children are still making up for lost time in math, science, and language arts proficiencies. As members of this community, we created Subaru Stars to get kids excited about learning and to help as much as we can to strengthen their skills.”
For the first Subaru Stars, Subaru Telescope’s staff volunteers packed two company vehicles with equipment: oversized chess and checker boards, a trash can “vortex cannon,” programmable robotics equipment, Subaru-designed spectrum light cards, and a touchless musical instrument called a theremin. Students were grouped by age and rotated through stations during the two-hour event, giving them each a chance to immerse themselves in the various activities.
Keiki learned how to play chess and checkers, which a statement from Subaru describes as "excellent games that are the building blocks of mathematics, problem solving and strategic thinking."
VEX 123 Robots took coding off the screens and into small hands. These disc-shaped robots allowed students to work on coding with simple push-button commands. "Robotics is essential for bringing STEM, computer science, and computational thinking to life through hands-on experiences," says the Subaru statement.
A crowd favorite was the “vortex smoke cannon” made from a large trash can. Fogging machines filled the cans and students created smoke rings that shot across the room with incredible force thanks to physics and the “Bernoulli Principle.”
Astronomy education is a part of the Subaru Stars program. Subaru Telescope public outreach specialist Dr. Kumiko Usuda-Sato developed a “spectrum card” to teach keiki how astronomers study outer space. With this card, students were able to see the “rainbows” in their everyday world.
Subaru Stars engaged teachers, students and administrators at Nā‘ālehu Elementary School and called the session "a great start to a partnership Subaru Telescope hopes will continue far into the future."
Nā‘ālehu Elementary School Principal Wilma Roddy said, “We are always looking for opportunities for our kids — just to have that exposure to help them realize that they have options and they can be whatever they want to be. This is the first time I’m seeing an event like this anywhere since COVID. For the kids to be able to see, touch and feel … it helps them connect to these concepts more. I feel like it really sparks their curiosity.”
Nā‘ālehu Elementary School sixth grade teacher Malu Zamudio said, “It’s exciting to see them so interested in something, and they don’t even realize it’s science. And after this, they can build off that experiential knowledge.” The Subaru statement says, "Subaru Stars was all about fun, but in the un is where learning and growing occurs." Third grader Kash Hu-Tavares was jumping directly into the smoke cannon rings as they would blow past him. “I like getting hit by the smoke rings,” he said. “It cools you off. I really hope they bring more events like this to our school because it’s so fun!” First grader Nieko Yates said every station and every activity were his favorite. “It all surprised me. There was so much science and so much learning! I’d never done these things before!”
The Subaru Stars team is busy preparing for the next event in September. “We are extremely happy with the first Subaru Stars,” says Wong. “The Subaru Stars team will be working closely with administrators to support STEM education, in particular helping to integrate computer science curriculum into the classroom. This is something that the Hawaii State Legislature and Governor Ige have identified as a priority in Hawai‘i schools.”
The Subaru Telescope is an 8.2 meter optical-infrared telescope at the summit of Maunakea. It is operated by the National Astronomical Observatory of Japan and the National Institutes of Natural Sciences. One of Subaru Telescope’s main missions in addition to astronomical discoveries is to foster education in the next generation of researches. The observatory of Subaru Telescope was officially established in April 1997.
To read comments, add your own, and like this story, see www.facebook.com/kaucalendar. See latest print edition at wwwkaucalendar.com. See upcoming events at https://kaunewsbriefs.blogspot.com/2022/04/upcoming-events-for-kau-and-volcano.htm

AN EDUCATIONAL CAMPAIGN ON FOOD WASTE has been initiated by the County of Hawai'i.
It notes Marine Science Professor, Dr. Jake Burns saying, "The science clearly shows that food waste ending up in landfills becomes methane gas, which accelerates climate change."
The campaign quotes Leonie Laeha Poy saying: "Using all our food saves money and protects our planet." 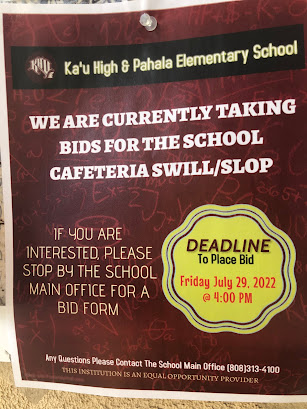 It recommends that the public: "Take only what you eat, check the refrigerator before shopping, make an Eat First sign for leftovers, and try a new recipe with food that isn't fresh. Learn how to compost at home - it's easy." See more information at www.HawaiiZeroWaste.org. 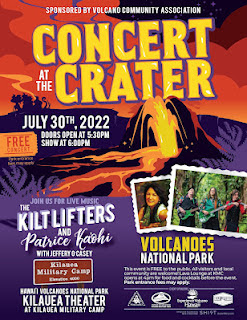 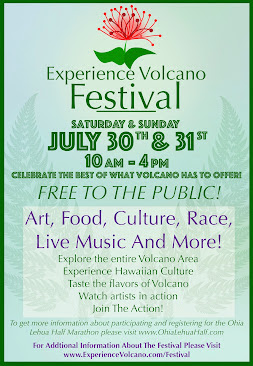 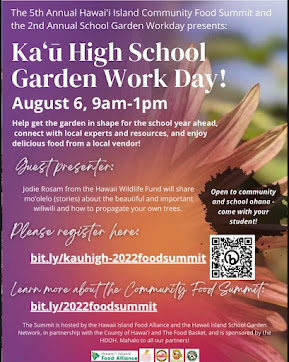 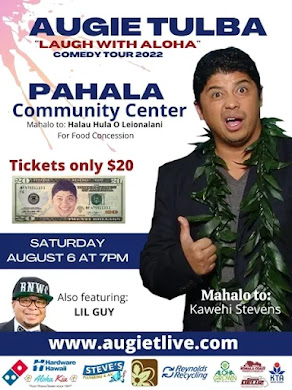