"MADELEINE ALBRIGHT'S STORY IS AN INSPIRATION TO MANY IN HAWAI'I," said Gov. Ige today, after the announcement of her death at age 84.
"She was a refugee and immigrant who believed in the ideals of our nation and dedicated her life to upholding them. Her leadership as the nation's top diplomat and first female Secretary of State changed the course of world history. During her years of unwavering service, she was a source of inspiration to women and girls everywhere. Dawn and I send our deepest condolences to her family and loved ones," said the governor. 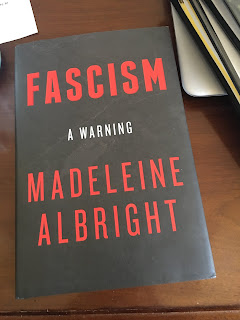 Sen. Brian Schatz knew Albright as family and tweeted: "Madeleine Albright is a towering figure in American and world history, but I knew her as family. She is my oldest brother’s mother in law, and when I came to Washington, we became friends. Actual friends. She was thrilled to have a politician in the family, and wanted to help without casting a long shadow, so she discreetly asked her friend Sen. Barbara Mikulski to keep an eye out for me."
Schatz described Albright as "a tireless and sharp political strategist, the kind of person who would watch CSPAN for fun, who was endlessly fascinated by politics at all levels, from municipal elections to the United Nations. I remember all of our long talks about everything, but mostly about our two shared loves, family and politics over a meal, which she would let me pay for occasionally.
"But most of all I will remember Grandma Maddie, who was kind and curious with my kids, taking us out to dinner in Georgetown, and being one of the most giving, decent human beings that I have ever known. May her memory be a blessing."
Albright spoke at a League of Conservation Voters Action Fund fundraising breakfast for Schatz in 2013. Both Albright and Schatz served on the board of the Harry S. Truman Scholarship Foundation. According to a Civil Beat report, contributions to Schatz campaigns have come from Albright herself as well as Albright Capital Management executive Gregory Bowes, Wyoming rancher Joe Albright, Katie  Albright, and Schatz's brother, San Francisco attorney Jacob Schatz.
Brian Schatz has recommended the reading of Madeleine Albrights' book, Fascism, A Warning.
To read comments, add your own, and like this story, see www.facebook.com/kaucalendar/. See latest print edition at www.kaucalendar.com. See upcoming events at https://kaunewsbriefs.blogspot.com/2022/03/upcoming-events-for-kau-and-volcano.html
NEW ELECTRIC BUSES SUPPORTED BY A CHARGING NETWORK, along with new hydrogen buses, are in the future of the county's Hele-On fleet, according to a plan brought to the County Council on Tuesday. The county is planning to transition away from leasing buses from transportation companies as it builds its fleet, with the arrival of 26 vehicles ranging from 26 to 45 feet long in 2023, followed by 18 in 2024. One hydrogen bus was scheduled to arrive on Wednesday.
With 55 vehicles and free ridership, the county aims to attract more people to forgo their private vehicles for public transportation.
County Council Chair Maile David said after the meeting: "It's a huge step in the right direction, building back the county's mass transit system with electric and hydrogen busses will begin to address historical maintenance challenges and antiquated equipment issues. More importantly, it is good for our environment. The expertise of Mass Transit Administrator John Andoh has moved Mass Transit forward and has begun the much talked about, and critical goal, of becoming less dependent on fossil fuels and thee goal of moving this county forward with environmentally efficient methods with respect to public transportation."
Andoh, who assumed the county's top transportation post in early January, presented the mass transit master plan to County Council's Committee on Public Works & Mass Transportation. He said that five of the electric buses plus solar voltaic charging stations at Hilo baseyard, Mo'oheau bus station and Puna Kai shopping center will be operated through a state contract with Sustainability Partners, LLC. Five additional electric buses will come through a federal grant. According to the plan, which requires Council approval, Sustainability Partners will receive income from the county for their buses, maintenance and for building out and running the charging stations to serve some 20 electric buses.
With he busses running at no cost to riders, the county will pay for public transportation using income from general excise taxes. The goal is to use solar and hydrogen to eventually get the fleet off fossil fuel and avoid drawing electricity from the grid to run the buses. Another proposal presented by Andoh to the County Council is approval of accepting a dozen buses being retired from the City & County of Honolulu as a stopgap along the way to fossil-fuel free transportation. 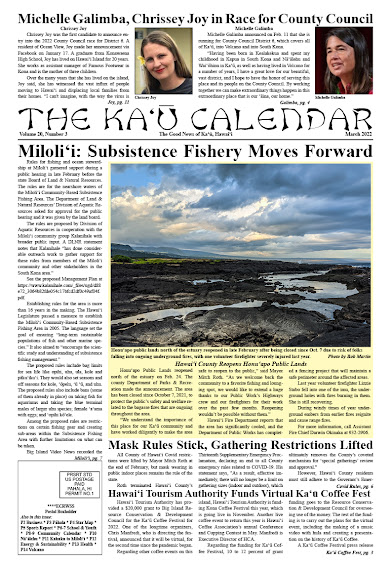 See March edition of The Kaʻū Calendar newspaper at
www.kaucalendar.com
Posted by The Ka`u Calendar at 11:44 PM