KAʻŪ DISTRICT WAS THE SITE OF EARLIEST GEOLOGICAL MAPPING IN THESE ISLANDS on a comprehensive scale, the mapping showing lava flows and water resources, including those tapped by 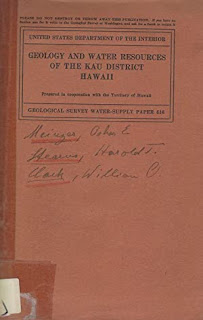 the sugar plantation digging horizontal tunnels into Mauna Loa Volcano. The water is still used by ranchers and farmers, as well as for potable water for the community of Wood Valley.
This week's Volcano Watch by  U.S. Geological Survey Hawaiian Volcano Observatory scientists and affiliates give some history on the evolution of geological mapping on this island and notes the maps have been updated to include the 2018 eruption and lava flows at Halema'umau, which is located in Kaʻū and into Puna:
The earliest comprehensive mapping of Hawaiian geology began in the Kaʻū District, Island of Hawaiʻi, in the 1920s by USGS geologists William Clark, Levi Noble, and Harold Stearns.
Stearns oversaw the expansion of geologic mapping of the eight Hawaiian Islands starting with Oʻahu and continuing with Lānaʻi, Kahoʻolawe, and Niʻihau. Stearns and a new recruit, USGS geologist Gordon Macdonald, mapped the geology of Maui, Molokaʻi, and the Island of Hawaiʻi. Geologic maps of all the islands except Kauaʻi were completed in the 1940s. Gordon Macdonald oversaw publication of the geologic map of Kauaʻi in 1960.
These early geologic maps identified individual lava flows erupted since Western contact and basic volcanic structure of the Hawaiian volcanoes. Dating of lava flow by analysis of decaying radioactive elements was not yet available so the progression of lava flows was deduced by mapping successive overlap of newer over older lava flows. In that way, a general sequence of volcanic activity was deduced, but resulted in older flows being grouped in larger units.
Chemical analysis of rocks from each of these lava flows revealed how magmas changed with time within each volcano. Each volcano followed a general progression of vigorous voluminous eruptions that built most of the volume of each volcano. Their outputs dwindled and changed chemically as each volcano aged before they finally became inactive and succumbed to erosion.
The life cycle of Hawaiian volcanoes and the observation that Hawaiian volcanoes get younger to the southeast (toward the Island of Hawaiʻi), along with other geologic data, led to the idea of mantle hotspots over which the islands and the oceanic crust on which they’re built moves. Hawaiian volcanoes are born over the hotspot and slowly die as the oceanic crust carries them off in a northwest direction.
The next major revision of geologic mapping was launched in the 1980s. With a firm understanding of plate tectonics, hotspots, and radiometric dating, USGS geologists remapped the geology of the Island of Hawaiʻi in more detail. Mapping techniques had improved and included use of aerial photography. The map, published in 1996 by USGS geologist Ed Wolfe and Hilo resident Jean Morris, included lava flows from the first 12 years of the Puʻuʻōʻō eruption and every other eruption of Kīlauea and Mauna Loa since 1942. Using the data from this map, the USGS published the first Lava Flow Hazard Map showing the relative hazard from lava flows on the Island of Hawaiʻi.
A newly published (2021) geologic map of our state, updated from a preliminary 2007 version, includes the early mapping of Stearns and Macdonald, the 1996 geologic map of the Island of Hawaiʻi, new mapping of East Maui, West Oʻahu, and West Molokaʻi volcanoes, and the Halemaʻumaʻu overflows and Puna lava flows of 2018.
USGS geologist Dave Sherrod worked with University of Hawaiʻi geologist John Sinton to make the most up-to-date geologic map of a very active volcanic chain of islands. The 2021 map can be thought of as compiling the long history of geologic mapping to characterize the much longer history of an active island archipelago.
But wait, there’s more! The pamphlet that accompanies the maps compiled new ideas about the way each island formed with the upgraded geologic framework of the islands. On Kauaʻi, the Līhuʻe basin probably formed by subsidence but there is still a question about whether one or two volcanoes formed the island. Oʻahu was built by three volcanoes, not two as Stearns thought. Haleakalā erupts every 200 to 500 years and its most recent eruption was probably more than 400 years ago—not in the late 1700s as previously thought.
Want to know more? The 2021 map is available as pdf files (pamphlet and maps as well as a GIS database). A printed version of the map is also in the works, but the publication date has not been finalized yet.
To read comments, add your own, and like this story, see www.facebook.com/kaucalendar/. See latest print edition at www.kaucalendar.com. See upcoming events and Kaʻū Calendar newspaper sponsors at http://kaunewsbriefs.blogspot.com/2022/02/events-of-february-2022.html. 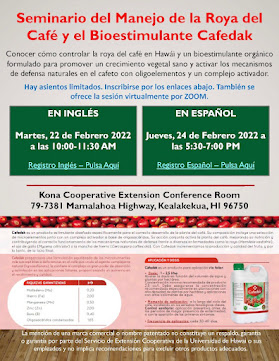 FARMERS ARE INVITED TO A COFFEE LEAF RUST MANAGEMENT PRESENTATION with Cafedak, a certified organic biostimulant. The method is designed for healthy growth of the coffee plant and to activate natural defense mechanisms with microelements, according to a message from University of Hawai'i College of Tropical Agriculture.
Two sessions will be held, one in English, next Tuesday, Feb. 22 from 10 a.m. to 11:30 a.m. Register at https://www.eventbrite.com/e/coffee-leaf-rust-management-cafedak-biostimulant-workshop-in-english-tickets-270055662757.
Another En Espanol will be on Thursday, Feb. 24 from 5:30 p.m. to 7 p.m.  Register at the same address.
Both will be available via zoom, but also live at Kona Cooperative Extension Conference Room at 79-7381 Mamalahoa Hwy in Kealakekua. Registration is required.
The event has also been posted by the Hawai'i Coffee Association's Executive Director Chris Manfredi to encourage coffee farmers to attend.
To read comments, add your own, and like this story, see www.facebook.com/kaucalendar/. See latest print edition at www.kaucalendar.com. See upcoming events and Kaʻū Calendar newspaper sponsors at http://kaunewsbriefs.blogspot.com/2022/02/events-of-february-2022.html. 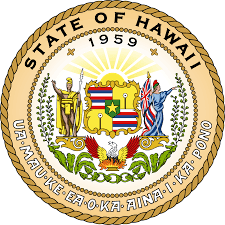 MONEY RELEASED BY GOVERNOR DAVID IGE FOR CAPTAL IMPROVEMENT PROJECTS, announced Friday, include no specific projects in Kaʻū and Volcano but do include improvements that affect residents here.
Within the more than $350 million in funding statewide, is $37.9 million to finance a new taxiway and runway lighting at Hilo International Airpot for completion by September of 2023. An additional half million dollars will finance design to be completed by this May.
Another project is partial funding for new housing at Hawai'i Community Correctional Center in Hilo, which is budgeted at $19.9 million. For the Works of Art special fund, required for public buildings, $163,600 will be set aside for the Correctional Center. Another $34,000 goes toward $1.12 million for fire protection and life safety improvements at HCCC's Hale Nanu Annex.
To read comments, add your own, and like this story, see www.facebook.com/kaucalendar/. See latest print edition at www.kaucalendar.com. See upcoming events and Kaʻū Calendar newspaper sponsors at http://kaunewsbriefs.blogspot.com/2022/02/events-of-february-2022.html.
MASK MAKING AT VOLCANO ART CENTER, Saturday, Feb. 19, 10 a.m. - 1 p.m. Learn the basics of paper mask-making with artist Lee Michael Walczuk at Volcano Art Center, Niaulani Campus. Workshop fee is $35/$30 VAC member plus a $8 supply fee. Register online at volcanoartcenter.org/events/.
VIRTUAL PUBLIC MEETING on Hawaiʻi Volcanoes National Park's Disaster Recovery Project. Thursday, Feb. 24, 12 - 1 p.m. and 6 - 7 p.m. To join the 12 p.m. meeting: https://swca.zoom.us/j/91430664015. Those without internet access can join by phone: (888) 475-4499 US Toll-free; Meeting ID: 914 3066 4015. To join the 6 p.m. meeting: https://swca.zoom.us/j/97252271515. Those without internet access can join by phone: (888) 475-4499 US Toll-free; Meeting ID: 972 5227 1515.
COVID-19 PFIZER VACCINE/BOOSTER CLINIC at Ocean View Community Center. Saturday, Feb. 26, 9 a.m. - 12 p.m. Open to ages 5 and up. Home test kits will be available while supplies last. Walk-ins and uninsured are welcome. Bring ID. Contact (808) 932-4205 for any questions.
MILOLIʻI ʻOHANA FUNDRAISER at Park Halau in Miloliʻi. Saturday, Feb. 26 10 a.m. - 3 p.m. Food, crafts, music, silent auction, and more. For more information, contact (808) 937-1310 or visit www.Kalanihale.com.
SEE MORE CALENDAR OF EVENTS & SPONSORS
http://kaunewsbriefs.blogspot.com/2022/02/events-of-february-2022.html
Posted by The Ka`u Calendar at 11:51 PM