FIREFIGHTERS REMAINED ON SCENE AT SOUTH POINT to douse hot spots that continued to flare up after the fire was declared contained and under control by Hawai`i County Fire Department. Crews first arrived Sunday afternoon, and over 200 acres were ablaze near Ka`alu`alu Bay within 1.5. hours. Fed by brisk trade winds, the fire quickly traveled toward South Point Road, consuming over 1,000 acres before being contained Sunday night.
Following the loss of hundreds of acres of pasture for their cattle, South Point ranchers have had to ship stock to the mainland early. MJ Ranch and TD Ranch worked together to round up each other’s stock.
Pahala Volunteer Fire Department Captain Ron Ebert said on Facebook, “There have been several flare-ups of this fire in the last several days. Please be extremely careful if you are in this area until all of the hot spots are eliminated.”
Lizzy Stabo, of Discovery Harbour Volunteer Fire Department, said on Facebook, “It was a long, tough, dangerous fire. Please be careful, only the beginning of our summer fire season.”
A Facebook comment by Denise Laitinen suggests, “It’s a good reason to be Firewise. Check out Firewise Communities Hawai`i for information on how to create defensible space around your home.”
The Fire Department asks motorist to be aware of its equipment and personnel still in the area.
To comment on or like this story, go to facebook.com/kaucalendar.

THE MADAGASCAN FIREWEED MOTH has become established on Hawai`i Island, reports Carolyn Lucas-Zenk in West Hawai`i Today. The biocontrol for the invasive and toxic plant was first released last year on three ranches in the Waimea area. According to Rob Curtiss, acting Department of Agriculture Plant Pest Control Branch manager, people are starting to see the moth in residential areas of Kona.
After receiving reports of sightings, Curtiss said he went out into the field Wednesday and Thursday and found moths in other places where releases didn’t take place.
According to Lucas-Zenk, Curtiss explained, “it’s going to be years before any real measurable effect … anywhere in the state because there’s so much fireweed. Approximately eight caterpillars are needed for about every single plant.” The department released an estimated 50,000 to 100,000 moths statewide, he said.
“With this little insect, even though there may be millions out there, we need trillions of them or more,” he said. “Meanwhile, they will be continuing to spread and to get established, feeding on fireweed and other weed-related plants.”
Lucas-Zenk said ranchers consider traditional removal methods and pesticides impractical and cost-prohibitive because the weed is so widespread. The state and Hawai`i Cattlemen’s Council consider biocontrol to be the only feasible long-term option for fireweed control.
Curtiss said his department is working on the three other potential fireweed biocontrol agents currently in quarantine: two seed-feeding flies and a stem-boring beetle, as well as exploring new potential biocontrol agents in Madagascar and South Africa. They are also working with Australia, which has an active fireweed control program.
See westhawaiitoday.com.

HAWAI`I PUBLIC UTILITIES COMMISSION has opened a regulatory proceeding “for the purpose of establishing and implementing an on-bill financing program, to be known as the Hawai`i Energy Bill Saver Program.”
Under the program, electric utility customers would purchase or otherwise acquire renewable energy systems, including rooftop solar, or energy-efficient devices through assessments on their electricity bill. The primary focus of the program is to make such systems and devices available to underserved markets, including the rental market, by overcoming the barrier of up-front costs.
The program would provide two options to make energy improvements.
The first option would allow a utility customer to install an energy improvement to be paid for through a tariff assessment that is placed on the metered account. The customer would not actually own the improvement. A third party would own it and be responsible for maintenance and insurance, with the customer essentially renting the improvement and receiving the benefits from the improvement for as long as the customer is receiving utility service through the meter. Under this structure, the energy improvement is tied to the meter, which allows the improvement, the benefits from the improvement and the payments for the improvement to be easily transferred between successive customers who are responsible for the metered account, such as subsequent renters or homebuyers.
The second option would allow a utility customer to install an energy improvement through a market- and finance-based product that, pursuant to a tariff, allows for payment of the product by using customers’ electric bills for purposes of billing and collection. Under this option, ownership of the energy improvement remains with the entities that enter into the financing product.
For more information, see puc.hawaii.gov. Docket Number is 2014-0129.
To comment on or like this story, go to facebook.com/kaucalendar.

DEPARTMENT OF LAND AND NATURAL RESOURCES’ Division of Forestry and Wildlife is inviting applications from interested persons for vacant seats on the Na Ala Hele Trails and Access Program Advisory Council on Hawai`i Island.
Na Ala Hele is the state Trail and Access Program. It was established in 1988 in response to public concern about the loss of public access to certain trails and the threat to historic trails from development pressure. Na Ala Hele has become increasingly engaged in trail management and regulatory issues due to both public and commercial recreational activities and emerging legal issues.
Na Ala Hele Advisory Council members are asked to advise the program on trail and access concerns and issues, discuss and make recommendations on legal issues and promote communication and cooperation between government and community representatives. Advisory council members receive public comments and recommendations and consult with their constituencies when needed.
The Na Ala Hele Advisory Council consists of nine members representing each of the following categories: Hawaiian culture, trail/mountain clubs, mountain bikers, hikers, equestrians, hunters, fishers, environmentalists, landowners and trail/access advocates.
Applicants are now being sought to fill two open seats in the Hawaiian culture and fishermen categories. At the same time, DOFAW is also creating a qualified list of those interested in any of the listed categories. All applicants should have an appropriate background in the category area as well as an interest in representing community stakeholders related to their respected categories.
Application forms are available at dlnr.hawaii.gov/recreation/nah. Applications will be reviewed by DOFAW and members of the council. Final selections will be made by the DLNR chairperson. Applications must be received by July 6, 2014.
To comment on or like this story, go to facebook.com/kaucalendar.

SUMMER JUNIOR RANGER PROGRAM at Hawai`i Volcanoes National Park begins June 17. Youngsters nine to 12 years old are invited to become junior rangers through the park’s Keiki o Hawai`i Nei program.
Keiki o Hawai`i Nei is designed to encourage a child’s enthusiasm for discovery by connecting them with the park’s resources and staff and to inspire their appreciation of what is uniquely Hawaiian by exploring the natural and cultural heritage of Hawai`i.
Participants must bring and be able to carry their own daypack with water, snacks, lunch, and raingear and hike up to three miles at a leisurely pace.
The fun-filled, four-day program begins Tuesday, June 17 and ends Friday, June 20. On June 17 and 20, the program is from 8:30 a.m. to 2:30 p.m.; on June 18 and 19, from 7:30 a.m. to 4 p.m.
On Tuesday and Friday, children will explore the park, and on Wednesday and Thursday, they will visit the national parks on the west side of Hawai`i Island. Transportation is provided, and there is no cost to enroll.
To reserve a space, call the park’s Education Center at 985-6019. Leave your name, email address, phone number, name of child, the child’s age and gender. A registration form will be emailed.
Reservation deadline is next Friday, June 13. 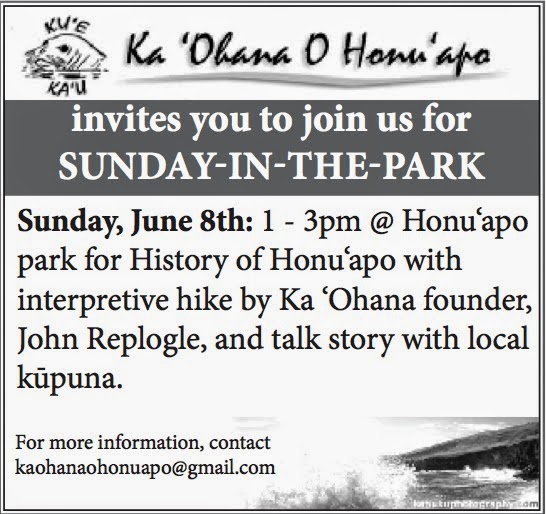 TOMORROW IS SUNDAY IN THE PARK at Honu`apo. Ka `Ohana O Honu`apo’s event from 1 p.m. to 3 p.m. features Darlyne Vierra discussing the history of Honu`apo Park and Ka`u and a hike led by John Replogle.
For more information email kaohanaohonuapo@gmail.com.

PAINTING WITH PEGGY IS SET FOR MONDAYS, June 9 and 23 from 10 a.m. to 2 p.m. at Volcano Art Center’s Niaulani Campus in Volcano Village. Peggy Stanton teaches acrylic painting to all levels. Free for VAC members; $20 for nonmembers.
Email peggystanton007@yahoo.com for more information. 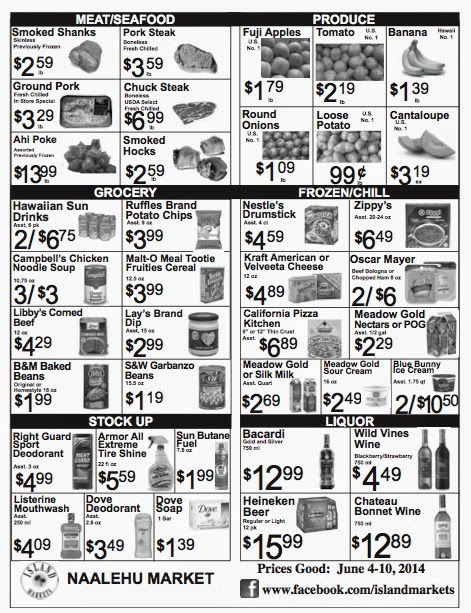 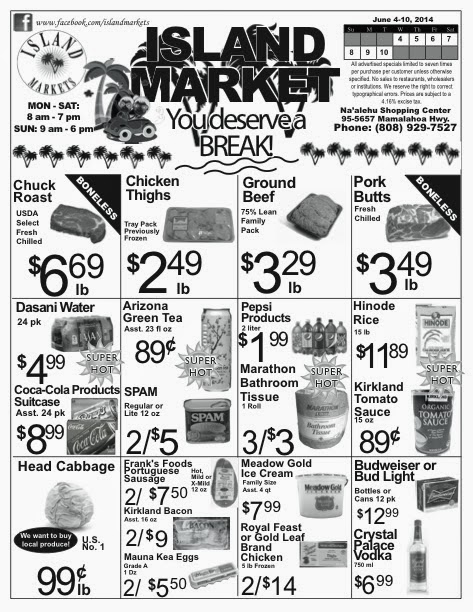 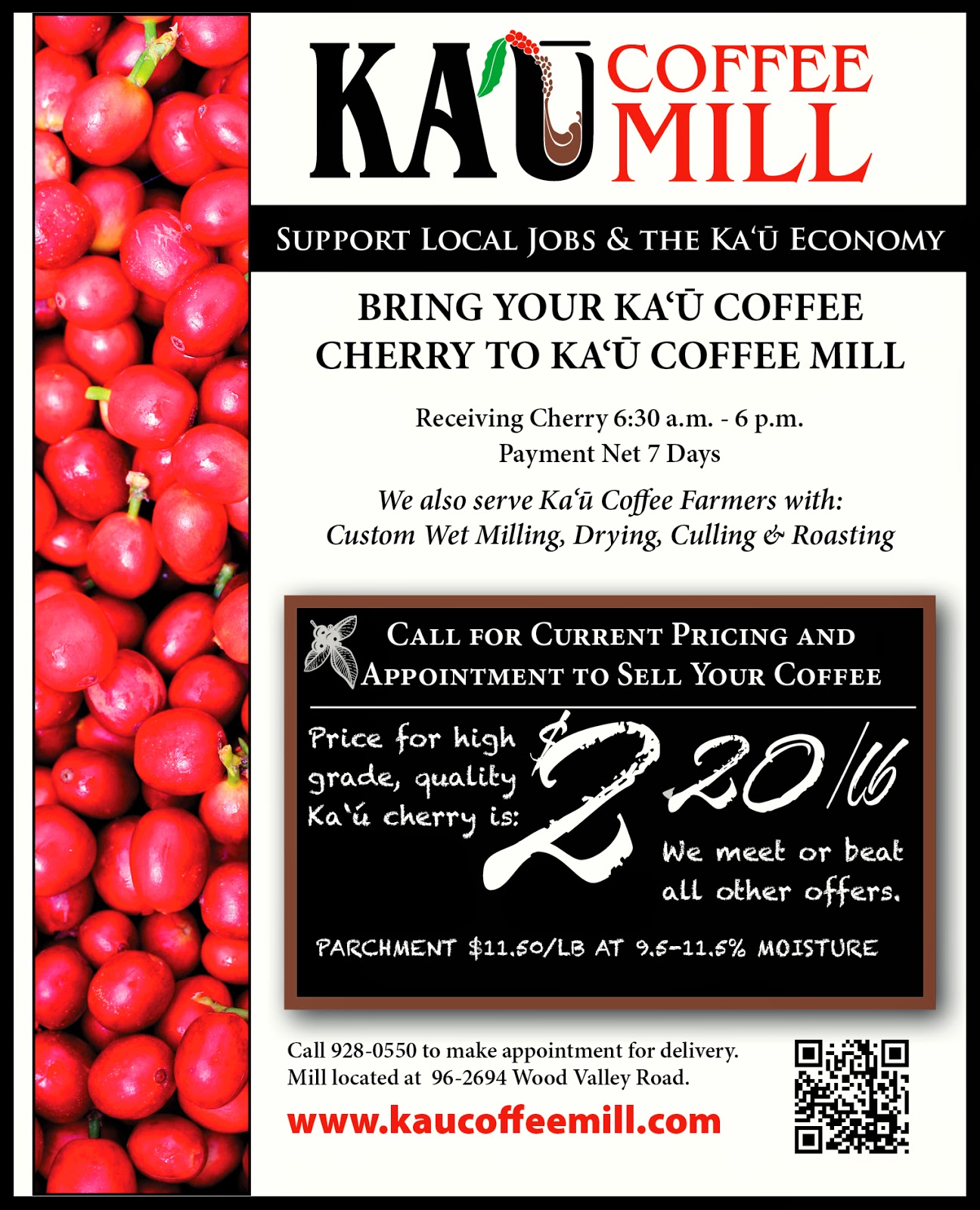