“THE AKP CONTRACT IS A BIGGER THREAT to our economic life” than was another recently proposed rate increase by the electric companies, writes Bill Walter, president of W.H. Shipman, Ltd. This week, Walter wrote to the Public Utilities Commission in opposition to `Aina Koa Pono’s proposal to sign a fixed-price contract for 20 years to buy diesel that would be manufactured in a refinery that would be built off Wood Valley Road above Pahala. The diesel would be trucked to a power plant in Kona.
AKP representatives said earlier that it was unfortunate that their proposal was before the PUC at the same time as the rate hike, making theirs more difficult to gain approval. Now that the rate hike has been withdrawn, Walter asks the PUC “to turn your attention seriously to the continuing concerns that we all have and that we’ve expressed concerning the proposed contract between Hawai`i Electric Light Co. and AKP. We understand that HELCO, the PUC, the Consumer Advocate and state government have a strong sense of responsibility to move our energy generation from its dependence on foreign oil with its high prices and increasingly unstable supply sources. We appreciate that these are concerns that are taken seriously at the highest levels. This is as it should be, and we thank you for placing these concerns as a high priority.”
Walter says that “both the 4.2 percent rate increase and the proposed contract with AKP were addressed by residents of the island. We are aware of no one who spoke against the AKP contract who, given the agreement on the 4.2 percent rate withdrawal, is now OK with moving ahead with the AKP contract.”
Walter continues, “At a fixed cost of $200 per barrel for up to 16 million barrels per year for 20 years, the built-in cost of this contract is simply a burden that we cannot and should not be asked to bear. What we desperately need here are technologies that drive the costs lower, not higher. These technologies exist. Rather than looking for replacements at any cost, we need to be looking for technologies at much lower costs. One example is geothermal that has an equivalent cost of $57 per barrel and easily sufficient volumes to move us forward. This is not the only such alternative - and not one that we push singularly.

“We have done a number of studies to determine and illustrate the affect of energy costs to residents of the island of Hawai`i. One recent survey showed a school district on the island that pays $115,900 per month to HELCO. At O`ahu’s (already high) costs, this cost would be $115,900/1.25 = $92,700. This is a savings of $23,200 per month that could otherwise be invested in teachers. This is significant!”
“Walter concludes, “We ask that you help this island by turning eyes on serious cost savings that can help HELCO turn the tide here by reducing our electricity costs and in so doing allowing us to better invest in all that we do to improve the lives of residents on the island of Hawai`i.”

COUNTY COUNCIL COMMITTEE MEETINGS are scheduled this Tuesday at West Hawai`i Civic Center in Kona. Committees meet as follows: Housing, 9:30 a.m.; Public Works & Parks & Recreation Committee, 11 a.m.; Finance Committee, 11:15 a.m.; Government Relations and Economic Development Committee, 1 p.m.; and Planning Committee, 3 p.m.
Committee meeting agendas are available at http://www.hawaiicounty.gov/lb-council-committee.
The full Council meets Wednesday at 9 a.m. at West Hawai`i Civic Center. An item on the agenda calls for $200,000 in funding for improvements to the water supply at Ocean View’s Kahuku Park that would provide sufficient water for drinking and irrigation and an auxiliary source of potable water in a disaster. The bill, introduced by Council member Brenda Ford, passed the Finance Committee unanimously at the committee’s last meeting.
Council agendas, along with information on how to submit testimony, can be viewed at http://www.hawaiicounty.gov/lb-council-meeting.
Ka`u residents can now participate in committee and Council meetings via videoconference at Ocean View Community Center, 92-8924 Leilani Circle. The system is available until 3 p.m. or later if public witness testimony has not been completed.
For more information, call 961-8536 or edistrict6@co.hawaii.hi.us.

SEN. MAZIE K. HIRONO, the first Japanese immigrant to serve in the Senate, has been named Senate co-chair of the Congressional Study Group on Japan, a bipartisan organization committed to promoting frank and candid dialogue between American lawmakers and their counterparts in Japan.
Hirono joins Sen. Lisa Murkowski (R-AK) as Senate co-chairs for the CSGJ in its 20th-anniversary year. Rep. Shelley Moore Capito (R-WV) and Rep. Jim McDermott (D-WA) co-chair the group in the House of Representatives.
“Our nation’s special relationship with Japan is now more vital than ever, particularly as our foreign policy places increasing attention on Asia and the Pacific,” said Hirono. “The Study Group prides itself on an honest, frank and informative dialogue with our counterparts in Japan, and that can only work to the benefit of both nations.”
“This role is a special honor for me personally as I was born in Japan and lived there the first eight years of my life,” said Hirono. “My personal bond with Japan enables me to bring a unique perspective as I work closely with the members of the Study Group to strengthen the special relationship between our two nations.”
For thirty years, Congressional Study Groups have provided substantive, issue-based opportunities for members of Congress to engage with their counterparts abroad. The Study Groups are the flagship international programs of the U.S. Association of Former Members of Congress, a bipartisan organization that works to promote public service, strengthen representative democracy, and keep both current and former members of Congress educated, engaged, and empowered to serve their country. Programming of the Congressional Study Group on Japan is supported by grants from the Sasakawa Peace Foundation, the Japan-U.S. Friendship Commission and corporations that make up the Study Group’s Business Advisory Council. 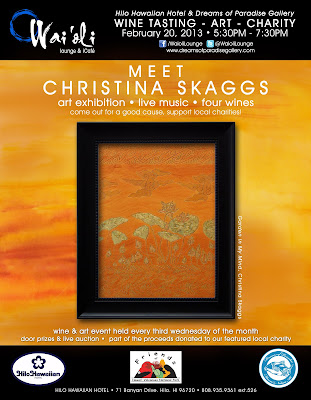 WINE TASTING, PUPUS AND ARTWORK by Christina Skaggs are featured at Friends of Hawai`i Volcanoes National Park’s fundraiser at Hilo Hawaiian Hotel’s Wai`oli Lounge this Wednesday from 5:30 p.m. to 7:30 p.m. Wine tasting will include four specially selected wines with unlimited return visits to the wine bar. Along with an unlimited, open pupu buffet, the event includes live music, an optional raffle, a silent auction and an art display and sale. Participants may choose wine tasting or pupu bar for $20 each or both for $40. All proceeds benefit the nonprofit Friends group. Tickets are available at 985-7373 or admin@fhvnp.org.

IN SPORTS THIS WEEKEND, Ka`u High Schools junior varsity softball team travels to Kea`au today for a game at 1 p.m.

ALSO SEE KAUCALENDAR.COM AND FACEBOOK.COM/KAUCALENDAR.
Posted by The Ka`u Calendar at 12:04 PM Links to this post