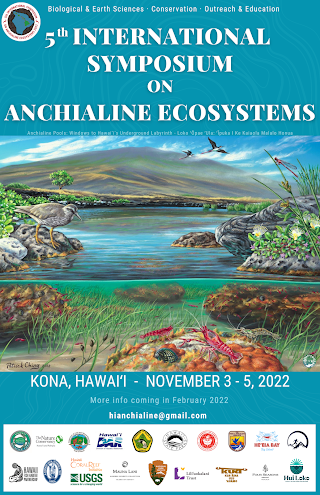 THE FIFTH INTERNATIONAL SYMPOSIUM ON ANCHIALINE ECOSYSTEMS has been announced. Megan Lamson, of Hawai'i Wildlife Fund, which helps to research and steward anchialine ponds in Kaʻū, and beyond sent out the message this week.
The symposium will be held Nov. 3-5 at King Kamehameha Hotel in Kailua-Kona. Register by Sept. 15.
The organizing committee is comprised of Lamson, Anne Farahi, Mio Kamioka, Leah Keller, Rebecca Most, Troy Sakihara, Dena Sedar and Barbara Seidel.
The event is sponsored by the state Divisions of Aquatic Resources and Hawaiʻi State Parks, Hawaiʻi Wildlife Fund, The Nature Conservancy and members of the Hui Loko network. Abstracts are due April 1. Contact hianchialine@gmail.com.
Anchialine ponds, a mix of fresh and salty water, are above and underground and are home to endangered Hawaiian shrimps and other native species. The shrimps include the herbivorous half-inch long Opae'ula and the Lohena snapping shrimp that prey on Opae'ula and grows as long as two inches.
Their threats include introduced tilapia, Tahitian prawns, koi, mosquitofish and guppies, as well as destruction of the ponds by filling them and pollution.
Native plants that frequent anchialine ponds include 'Ilima papa (Sida fallax), makaloa (Cyperus laevigatus), ahuawa (Cyperus javanicus) and Akulikuli (Lycium sandwicense), as well as native seagrass. Invasive plants range from Christmas berry to sourbush and lantana.
Locations of anchialine ponds along the Kaʻū  Coast include at Ka Lae on Hawaiian Home Lands, many of the conserved shoreline areas, and within Hawai'i Volcanoes National Park. The work to preserve them through Hawai'i Wildlife Fund, other nonprofits and government agencies has grown over the last 15 years.
According to U.S. Fish & Wildlife Service,  "Anchialine habitats are ecologically distinct and unique, and while widely distributed throughout the world, they only occur in the United States in the Hawaiian Islands. Over 80 percent of the state’s anchialine pools are found on the island of Hawai`i, with a total of approximately 520 to 560 pools distributed over 130 sites along all but the island’s northernmost and steeper northeastern shorelines."
To read comments, add your own, and like this story, see www.facebook.com/kaucalendar/. See latest print edition at www.kaucalendar.com. See upcoming events and Kaʻū Calendar newspaper sponsors at http://kaunewsbriefs.blogspot.com/2022/02/events-of-february-2022.html.
VOLCANO WATCH TURNS ITS ATTENTION TO A VOLCANO IN THE MIDDLE EAST. Written by scientists and affiliates of USGS Hawaiian Volcano Observatory, this week's column:
First hint: most people who know the name probably don't know it refers to a volcano. Second hint: where do many people think Noah's Ark landed when the Biblical Great Flood receded?The answer is Mount Ararat, a volcano that rises to an elevation of 5,137 m (16,854 ft) and towers over the Armenian Highlands in eastern Turkey near its borders with Iran and Armenia. A small glacier caps the mountain and is currently melting. The volcano dominates the skyline as seen from Yerevan (population 1.1 million), the capital city of Armenia some 65 km (40 miles) away and 4 km (2 miles) lower, and it has long been a cultural icon for Armenians.
Mount Ararat comprises two large cones 13 km (8 miles) apart, Greater and Lesser Ararat. Greater Ararat, the western of the two cones, is about 25 km (16 miles) wide and rises some 3 km (1.9 miles) above its surroundings. It is separated from Lesser Ararat (3,896 m or 12,782 ft high and 15 km or 9 miles wide) by a large north-south fault; many smaller cones and lava domes erupted along this fault and on the flanks of the two larger cones. 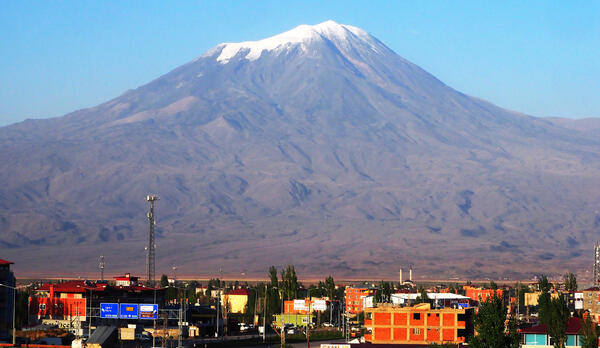 Glacier caps Greater Ararat, looking 30 km (19 miles) north through hotel window in Dogubeyazit, Turkey.
Photo by Don Swanson
Mount Ararat began forming about 1.5 million years ago. Eruptions produced thick deposits of explosive debris, including pyroclastic flows, and lava flows with wide-ranging compositions from basalt to rhyolite, resulting in the construction of the two major composite stratovolcanoes.
Greater Ararat remains volcanically active. It last erupted on July 2, 1840, when a pyroclastic flow issued from radial fissures high on its northern flank, accompanied by a phreatic explosion.
Unconfirmed eruptions may have occurred in CE 1783 and 1450. Oral traditions recount an eruption in about 550 BCE.
Pyroclastic flows from the northwest flank of Greater Ararat killed many people and destroyed at least one Bronze Age settlement in 2500-2400 BCE. Such activity in the past 4500 years indicates that Mount Ararat continues to pose a hazard to the sparse population of the surrounding area.
Could an eruption of Mount Ararat have covered or burned away Noah's Ark, assuming, for the sake of argument, that the ark existed? The eruptive history of the past 4500 years allows this remote possibility, but since we don't know the age of the ark, the question is moot.
Biblical scholars emphasize that the Hebrew of Genesis 8:4 refers to "mountains of Ararat." Postbiblical tradition assigns the location of ark landing to Mount Ararat itself, but the name Urartu (the cognate of the Hebrew Ararat) was the name of a much wider region that happens to contain Mount Ararat. Were volcanoes other than Mount Ararat active in Urartu?
Young volcanoes also occur near Lake Van 120 km (75 miles) southwest of Mount Ararat; the closed-basin lake is Turkey's largest and one of the most alkaline lakes in the world, with a pH of 9.7-9.8. Basalt flows from Tendurek, a broad shield volcano which last erupted in 1855, line the road 20-40 km (12-25 miles) northwest of the lake.
At the southwest end of Lake Van is the well-known Nemrut volcano, with a summit caldera and, according to the Smithsonian Institution's Global Volcanism Program, 10 confirmed eruptions in the past 6,000 years. Other volcanoes, such as Suphan, also occur between Mount Ararat and Lake Van but are reportedly a little older than those mentioned.
The Mesopotamian "Epic of Gilgamesh" also describes a huge flood, probably some 4500-5000 years ago along the Tigris and(or) Euphrates Rivers, which drain much of the area containing these active volcanoes. Some scholars speculate that the Gilgamesh and Biblical floods are the same. Such speculation can probably never be more than just that, but the possibility that an eruption in Urartu dammed a river and led to a massive flood when the dam failed may be one element of speculation that is reasonable geologically.
Whether or when the great floods of Noah and Gilgamesh actually happened may never be known. A remote possibility overlooked in most discussions about these canonical events, however, is that volcanic activity could have played a role. 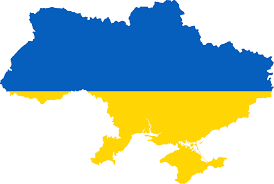 THE ONGOING ATTEMPTED TAKEOVER OF UKRAINE BY RUSSIA drew a statement from Gov. David Ige this week: "During WWII, Hawaiʻi experienced first-hand the destruction and suffering caused by bombs. Now, bombs are falling in Ukraine, and the people there are experiencing unimaginable loss of life and suffering. I know the people of Hawaiʻi join me in condemning this act of aggression and supporting President Biden’s actions to help the brave people of Ukraine and hold Russia accountable." 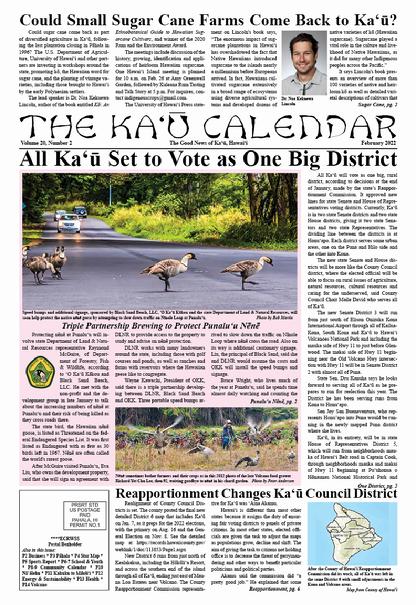 See the February Print Edition of The Kaʻū Calendar at www.kaucalendar.com