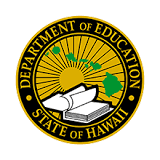 Department of Education schools enrolled a total of 156,518 students this year, compared with 159,503 students at the start of last school year, a 1.9 percent decrease. The figures include students enrolled in schools and the state distance learning program. The state's 37 charter schools, meanwhile, enrolled a total of 12,116 students, compared with 12,097 the previous year.
"The declining trend in enrollment counts over the past four school years reflects Hawaiʻi’s overall declining birth rate over the last decade. Department data also show that families’ leading reason for removing their students from public schools is for relocation to mainland states," according to DOE.
View the report on enrollment at all the schools at https://www.hawaiipublicschools.org/DOE%20Forms/Enrollment/HIDOEenrollment2022-23.pdf

UHERO FORECASTS A MILD RECESSION IMPACTING THE ECONOMY OF HAWAI'I. University of Hawai'i Economic Research Organization issued its report on Friday, saying "Hawai'i's economic prospects have worsened over the past several months. Surging inflation and interest rates are already impacting local famlies, as they have elsewhere. And the Fed's necessary 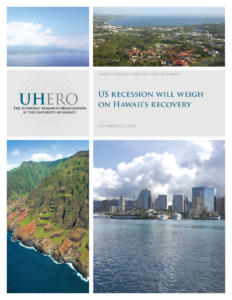 policy medicine - additional interest rate hikes- will bring further challenges before this is over.
"A Hawai'i economy that has already downshifted over the course of the year wll slow further as the US. economy enters recession. The long-awaited return of Japanese visitors and robust public sector construction will offset U.S. weakness, which we think will keep Hawai'i job growth in a positive territory. But there are troubling risks as well including the impact of a very weak yen, potenetial larger Fed interest rate hikes and a deeper U.S. fall. In any event, a return to satisfactory economic progress here will not being until 2024."
UHERO predicts that a coming recession "will not be anywhere as severe as the last two." UHERO also suggested Hawai'i could avoid a recession. "While the U.S. is the main source of Hawai'i tourists, international visitors are just beginning to return in larger numbers. Returning visitors from Japan and other international markets may partially insulate Hawai'i from a U.S. downturn." The report also notes that the Department of Hawaiian Homelands has the potential to be an important source for new housing construction with its $600 million of new funding for it.
See the 18 page forecast plus numerous data points used in the analysis at https://uhero.hawaii.edu/wp-content/uploads/2022/09/22Q3_Forecast.pdf

AN EARTHQUAKE SWARM AT MAUNA LOA was reported by Hawai'i County Civil Defense on Friday, with data from U.S. Geological Survey's Hawaiian Volcano Observatory.
The message pointed to "small seismic swarm activity ongoing beneath the summit of Mauna Loa Volcano. Over 38 earthquakes of up to 2.7 in magnitude occurred beneath the summit caldera region just below sea level. According to HVO, Seismic activity beneath Mauna Loa has been gradually increasing over the past two months and small earthquake swarms are considered a normal part of this increase in activity. Currently there are no indications that magma is moving toward the surface and there is no eminent signs that an eruption will occur. HVO and Civil Defense will continue to closely monitor this activity and report any significant changes that may affect your safety."
USGS reported that the "earthquakes may result from changes in the magma storage system and/or may be part of normal re-adjustments of the volcano due to changing stresses within it."To read comments, add your own, and like this story, see www.facebook.com/kaucalendar. See latest print edition at wwwkaucalendar.com. See upcoming events at https://kaunewsbriefs.blogspot.com/2022/04/upcoming-events-for-kau-and-volcano.html.

WHERE IS THE LAVA HEADED AND WHEN WILL IT GET THERE? That is focus of Volcano Watch by USGS Hawaiian Volcano Observatory scientists and affiliates. This week's article is by Postdoctoral Researcher David Hyman:
When lava flows break out on the flanks of Kīlauea or Mauna Loa, Hawaiʻi residents and emergency management agencies from all over the world want to know what to expect.
During the 2018 Kīlauea Lower East Rift Zone eruption, lava from 24 fissures inundated more than 8,000 acres (3,200 hectares) of land in the Puna District and more than 700 structures were destroyed. Sobering figures like these highlight the need for forecasting the advance of lava flows to help emergency managers, residents, and USGS Hawaiian Volcano Observatory (HVO) staff. Highly accurate forecasts for other natural hazards such as hurricanes, flooding, drought, and even the spread of vog from Kīlauea are now commonplace. Can we do the same for lava flows?
The most successful forecasting efforts for other natural hazards rely on the ability to simulate flows of water or air. Even though the motion of these fluids is typically much more complex than that of lava, we know a great deal more about water and air than lava as a material. After all, we can't see inside a lava flow to observe what is happening below the surface the way we can for water and air.
At the heart of hazard forecasts are computer algorithms crunching the numbers as fast as possible to make a relevant forecast. After all, a prediction of severe flooding in 24 hours is not very useful if it takes 23 hours to make that forecast.

Although researchers have been applying the principles of fluid dynamics to lava flows for more than 40 years, most simulations are too slow to use during a crisis when we really want to know the answer to the questions: Where's that lava headed and when will it get there?
To help answer that question, HVO scientists have for many years forecasted the general path of lava flows using the principle of steepest descent—that lava flows downhill. In many cases, these forecasts have worked really well; however, this method can't by itself answer the second part: "... and when will it get there?" because it predicts only the route, not the speed or the flow's final length.
To help answer these questions, USGS scientists are developing a new lava flow forecasting model based around the physics-based simulation of lava as it flows across real topography while cooling and solidifying. This model is designed with simplified, but realistic physics, enabling the simulation of 24 hours of lava advance in as little as a couple of minutes on an ordinary laptop.
This research is supported by the Additional Supplemental Disaster Relief Act of 2019 (H.R. 2157), which has also funded the work of many HVO projects that have been the subjects of recent Volcano Watch articles.
Of course, we don't have perfect knowledge or measurements of our model inputs, so a single simulation doesn't provide much information about our confidence in a forecast. By running the code many times with a range of inputs, the collection—or ensemble—of all these models can give us a much better idea of the range of possible outcomes. This has been a common practice in forecasting hazardous weather such as hurricanes for many years and is now the cutting edge in volcanic hazards research. HVO scientists are investigating how to produce ensembles using this new model, with the goal of successfully forecasting lava inundation during future eruptions.
Although there is a great deal we do not know about what a volcano is about to do, we can make some short-term forecasts based on what is currently happening. These forecasts, even over short periods of time, give people in the path of lava flows the ability to plan, providing critical answers to the questions: "Where's that lava headed and when will it get there?"

KAʻŪ TROJANS FOOTBALL COMES HOME Saturday for a game against Ka Makani, of Hawai'i Preparatory Academy fromWaimea. Start time is 2 p.m. On Friday, the winning Kaʻū Girls Trojan Volleyball Team is on the road to play Ka Makani in Waimea. Start times are 5 p.m. for JV and 6 p.m. for Varsity. Ka'u's Cross Country team is headed for Kealakehe on Saturday for a Big Island Interscholastic Federation meet. It begins at 9 a.m. Trojans sports teams are comprised of talent from Kaʻū High and Volcano School of the Arts & Sciences.