HAWK WEEK BEGINS ON SUNDAY. Conservation agencies made the announcement this week. The first-ever Hawk Week in Hawai'i is Oct. 9-15. Intended to bring attention to the plight of the state's native hawk, the 'Io, and to raise awareness about threats it faces, the week includes numerous opportunities for involvement and education.
The 'Io named Makaʻio is the ambassador for his species and for Hawk Week. He lives in the Hawaiʻi Wildlife Center in north Kohala, after numerous injuries in the wild. The three-year-old male bird came to the center in 2019 and is under the care of veterinarian Dr. Juan Guerra and his team. “His main problems were an eye injury and a soft-tissue wing injury,” Guerra explained while putting Maka‘io through a daily series of exercises to keep him healthy. “His wing injury healed fine, but he can’t see out of his right eye anymore. As a birds of prey, ‘Io don’t do well out in the wild if they’re unable to see with both eyes.”             The center applied for permits from the U.S. Fish & Wildlife Service and DLNR Division of Forestry & Wildlife to keep Maka‘io as an education bird. Guerra said, “He’s here for people in the local community to learn more about his species, about their natural history, their cultural importance, and the work we do at the wildlife center.”
Those are exactly some of issues and subjects, Hawk Week covers during seven-days of ‘Io appreciation online presentations.


Ande Buskirk, Education & Outreach Specialist for the DOFAW Hawai‘i Island branch, conceived the week-long series of virtual talks as a way to honor and celebrate the native hawk. “Each day, starting this Sunday, new content will be added to the Hawk Week page according to each day’s theme,” Buskirk said. Sunday, Oct. 9, learn about Biology and Natural History. On Monday, Oct. 10 learn about Cultural Connections involving 'Io. Tuesday, Oct. 1, hear about Conservation Actions. On Wednesday, Oct. 12, find out about Public Appreciation. On Thursday, Oct. 13 listen to stories of Care and Rehabilitation. On Friday, Oct. 14, study Co-existence. On Saturday, Oct. 15 understand the future for hawks in Hawai'i with the slogans Holomua! Onward! 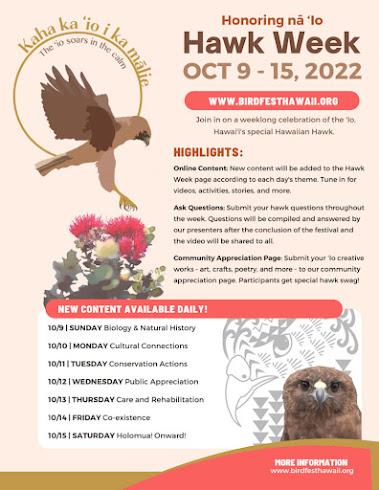 In addition to Hawk Week virtual events, DOFAW education specialists have been offering programs to interested public schools on Hawai‘i Island to provide information about ‘Io and particularly the threats they face from people.
Ray McGuire, a DOFAW Wildlife Biologist commented, “Protecting our native wildlife is huge. If people know there is a community that cares about these birds, perhaps that will stop some people from shooting at them. We want to remind people that ‘Io and many other native birds are protected under both federal and state laws.”
In addition to DLNR's DOFAW and Hawai'i Wildlife Center, Office of Hawaiian Affairs is a primary supporter of Hawk Week. US Fish & Wildlife Service, San Diego Zoo Wildlife Alliance and the 'Alala Project provided expertise in developing Hawai Week programming.  Find links to the programs at http://birdfesthawaii.org/

AG THEFT IS EXPECTED TO INCREASE, WITH A SMALLER COFFEE AND AVOCADO CROP THIS YEAR, says a message from University of Hawai'i Agricultural Extension Service. Agent Andrea Kawabata reports that agricultural thefts occurred on at least two fruit farms on the Big Island and on several properties on Maui. A lower than usual coffee and avocado crop is expected making these targets as well. Agricultural theft can be considered theft in the second degree and a class C felony. Kawabata urges: "Protect yourself and your fruit or other agricultural commodities, and be aware of the following law which was created to protect farmers." 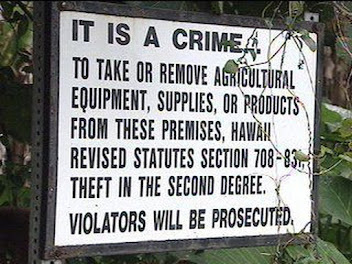 The Hawai'i State Law requires: "For the transport and sale of all agricultural commodities exceeding 200 pounds or with a value of at least $100, the Hawaii Revised Statutes section 145-22 requires that (DL-22) records shall include the following: The seller's name, residence address, telephone number, and license plate number of any vehicle used by the seller to deliver the commodity to the place of purchase; name of the farm owner and address of origin; name of the buyer or consignee, and destination; and signature of the seller and, upon sale, the signature of the buyer or consignee."
See the HDOA Certificate of Ownership/Movement of Agricultural Commodities (DL-22).
In addition, sales over $300 also require the seller to present the buyer with a valid photo ID card or license, issued by a federal or state government agency.
Kawabata recommends farmers to "Take precautions to safeguard your fruit and ag commodities and report any thefts or possible thefts to the police. If you would like ideas on how to protect your farm and property from agricultural theft, click here.
"For your safety and those around you, avoid intervening while a crime is in progress and call 911. If a theft has already been committed and for non-emergency situations, call your island's non-emergency number. Once the police arrive, provide them with photographs, videos, written documentation, and serial/identification numbers of stolen items, if possible. The more details and evidence provided, the more it might help the officer make an arrest." 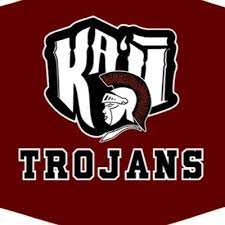 USGS MAUNA LOA VOLCANO UPDATE: Hawaiian Volcano Observatory reported on Thursday that during the past 24 hours, HVO seismometers recorded approximately 44 small-magnitude (below M3.0) earthquakes below the summit and upper-elevation flanks of Mauna Loa. The majority of these earthquakes occurred at shallow depths less than 15 kilometers (9 miles) below sea level.
The summit trail on Mauna Loa remains closed by Hawai'i Volcanoes National Park due to the increased seismicity. Global Positioning System measurements show continued steady rates of deformation consistent with inflation in the volcano's summit region. Tiltmeters at the summit show no significant changes over the last 24 hours.
Concentrations of SO2), hydrogen sulfide, and CO2, as well as fumarole temperatures, remain stable at both the summit and at Sulphur Cone on the upper Southwest Rift Zone.
Webcam views have shown no changes to the volcanic landscape on Mauna Loa over the past week.
HVO plans to closely monitor Mauna Loa for changes and issue daily Mauna Loa Volcano updates until further notice.
Mauna Loa is the largest active volcano on the planet, rising gradually to 13,681 feet above sea level. Its long submarine flanks descend an additional three miles below sea level to the ocean floor. The ocean floor directly beneath Mauna Loa is, in turn, depressed by the volcano's great mass another five miles. This places Mauna Loa's summit about 56,000 feet above its base. The enormous volcano covers half of the Island of Hawaiʻi and by itself amounts to about 85 percent of all the other Hawaiian Islands combined.
Eruptions typically start at the summit and, within minutes to months of eruption onset, about half of the eruptions migrate into either the Northeast or Southwest Rift Zone. Since its first well-documented eruption in 1843, the volcano has erupted 33 times with intervals between eruptions ranging from months to decades. Mauna Loa last erupted in 1984.
Mauna Loa eruptions tend to produce voluminous, fast-moving lava flows that can impact communities on the east and west sides of the Island of Hawaiʻi. Since the mid-19th century, the city of Hilo in east Hawaiʻi has been threatened by seven Mauna Loa lava flows. Mauna Loa lava flows have reached the south and west coasts of the island eight times: in 1859, 1868, 1887, 1926, 1919, and three times in 1950.
For more information on current monitoring of Mauna Loa volcano, see: https://www.usgs.gov/volcanoes/mauna-loa/monitoring.