NOMINEES FOR KAʻŪ COMMUNITY DEVELOPMENT PLAN ACTION COMMITTEE ARE PROPOSED. Read the Plan at https://www.hawaiicountycdp.info/kau-cdp. Mayor Mitch Roth has sent a list of nominees to the County Council for confirmation. Here are the nominees with their bios, and his reasons for nominating them, as submitted by the mayor to the County Council for confirmation, which is expected by early May:
Leina'ala Enos: "Miss Enos is a lifelong resident of Hawai'i and attended Kamehameha Schools and University of Hawai'i in Hilo. Serving her community was always an important part of her life. She served as Chair for the (Kaʻū) CDP Steering Committee and is past member of the Liquor Commission. Ms Enos retired from Queen Lili'uokalani Trust as the Community Building Facilitator. She brings an extensive community service and volunteerism background," wrote the mayor.
Babette Morrow: "Ms. Morrow earned her Bachelors degree in Sociology from the University of Maryland a Master's degree in Urban and Regional Planning from the University of Colorado at Denver and is certified by the American Association of Certified Planners, Zoning Official and City Planner in the City of Littleton, Colorado. She offers over thirty years of experience working with the writing and implementation of city zoning codes and community development plans.
"Ms. Morrow has been a member of 'O Ka'u Kakou (OKK) for ten years and currently serves as Board of Directors. She hopes to continue her service with leaders in the Ka'u Community," wrote the mayor.
Catherine Williams: "Ms. Williams has been a resident of Hawai'i for Forty-years. She earned her Master's degree in Theater Production from the University of Hawai'i at Hilo and graduated from Humboldt State University with here Certification in teaching. She also served as Executive Director of Hilo Community Players and is currently an Academic Literacy Coast at Pahala Elementary.
"Ms. Williams served with the US Coast Guard Reserve and dedicated over twenty years of active service working in the area of addiction recovery. She holds a deep love for the community of Ka'u, which she calls home," wrote the mayor.
Kaohinani Mokuhali'i: "Ms. Mokuhali'i has been a resident of Hawai'i for over sixty years. She worked at Department of Education at Pahala & Na'alehu Elementary School. She also worked at the Na'alehu Dairy and is currently employed as Ranch Manager at Kuahiwi Ranch, Beef and Feed. She is also the Owner of KM Farm & Ranch Services.
Mokuhali'i has dedicated over thirty years of volunteerism and community service to the Ka'u Farm Bureau, the Ka'u Soil and Water Conservation, Waikapuna Heritage Preserve Steward Committee, Kaunamano Heritage Preserve Steward Committee and Hawai'i Historical Preservation," wrote the mayor. 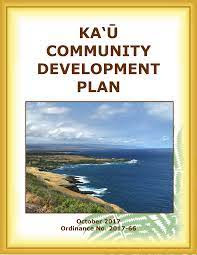 Pernell Hanoa: "Mr. Hanoa and his 'Ohana has lived in Punalu'u and Ka'u since the 1800's to the present. They are deeply rooted in al thing Ka'u. He spent 10 years with the Directorate of Public Works (DPW) at the Pohakuloa Training
Area (PTA) and as the current Facility manager for the USDA-ARS Daniel K. Inouye Research Facility in Hilo, Mr. Hanoa is responsible for the repair and maintenance of the most advanced USDA-ARS research facility in the United States. He wants to ensure future development truly addressed the needs of the community.
"Mr. Hanoa's community service includes youth and high school sports coach, cultural practitioner. Ka'u Preservation and Ka'u Advisory Council," wrote the mayor.
Jason Masters: "Born and raised in Ka'u, Mr. Masters is a graduate of Ka'u High School where he now serves as a substitute teacher. Besides having an extensive background in Environment Studies, Planning, and Public Administration, Mr. Masters if a Farmer and Commercial fisherman. He returned home to fulfill his lifelong passion of giving back and working to support his community and the Big Island," wrote the mayor.
Kaweni Ibarra: "Mr. Ibarra is a graduate of Ka'u High School and offers a background in Anthropology. Currently the Education Specialist for Malama 'Aina Foundation and Cultural Specialist for Na Mamo o Kawa, Mr Ibarra is committed to positively contributing to the future of Ka'u. Growing up in Ka'u provided experiences of strength and hardship - instilling the value do taking initiative and finding solutions by empowering and uplifting the community's greatest strengths. "Mr. Ibarra's community service includes Ka'u Advisory Council, Ka'u Multicultural Society, Aha Moku Council, Hana Laulima Lahui o Ka'u, and Na Mamo o Kawa," wrote the mayor.
Jessie Ke: "Ms. Ke is a lifelong resident of Hawai'i. As a Kupuna of 5 children and 53 grandchildren, she has invested a lifetime of educating and nurturing the children of Ka'u generations. Ms. Ke has an extensive background in community service and volunteerism. She is the President of Po'o Kupuna an active board member for Hana Laulima 'o Ka'u and Ka'u Cultural advisory, to name a few.
"Ms. Ke brings multicultural expertise in the history and traditional practices and would be a great asset to the Committee," wrote the mayor.
The entire County Council is expected to take up the nominations for confirmation by its meeting on May 4. A meeting notice sent out to those interested in the Kaʻū Community Development Plan announces a session with representatives of the county this Thursday from 5 p.m. to 7 p.m. at Pāhala Community Center.

A FORMER STATE SENATOR FROM KANEOHE ON O'AHU is seeking to represent Kaʻū and all of rural Hawai'i in the U.S. Congress. The seat is currently held by Rep. Kai Kahele who became the first Hawai'i member in Congress to move the office representing rural Hawai'i from downtown Honolulu to a rural Neighbor Island community. Kahele put his office in Hilo. Kahele is contemplating either a run for governor or to campaign to keep his seat in Congress, and is expected to make the announcement in early May.

The candidate seeking what is now Kahele's congressional seat is Jill Tokuda, who like Kahele, formerly served in the Hawai'i State Senate. Until Tuesday, she was running for Lieutenant Governor, but shifted by filing federal election papers for the congressional race. In 2018, Tokuda narrowly lost the Lieutenant Governor's race to Josh Green. To run in 2018, she left the state Senate, after serving since 2006.
Tokuda grew up on O'ahu, graduating from her parents' alma mater Castle High School. Tokuda earned her BA in international relations and minor in Japanese studies from George Washington University in the nation's capital. In addition to elected offices, her career includes serving as Director of Community Relations for Reynolds Recycling on O'ahu, Director of Development for National Kidney Foundation of Hawai'i, and executive aide for Sen. Mazie Hirono, when Hirono served as Lieutenant Governor. Tokuda also founded and chaired Charitable Ventures, Inc. During the pandemic, she advised the Hawai'i Data Collaborative and helped track progress on federal relief spending. In 2019, Tokuda was named Executive Director for Nisei Veterans Memorial Center on Maui. Her Nisei grandfather was interred by the U.S. government during World War II.

Andoh said, "At long last, I am pleased to state that we will have Hele-On Route 12 between Ocean View and Volcano begin, as well as the fourth trip on Route 90 between Pāhala and South Kohala Resorts. Route 12 will provide deviated fixed route service seven days a week and serve the subdivisions in Ocean View and in Volcano. It will have timed connections to Route 90 to continue to Kailua-Kona or Route 11/Red Line to continue to Hilo. This route will also effectively allow someone to ride public transit around the island via Routes 2/Blue or 80, 11/Red or 10, 12 and 90."
For those for whom these services won't work, Andoh suggested checking with a Mass Transit Agency-funded HCEOC program. The service is available Monday-Friday 6 a.m. to 4:30 p.m. "If you are low income, senior or have a disability, they will 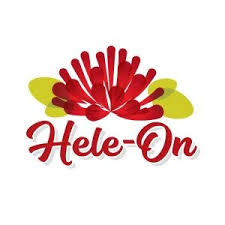 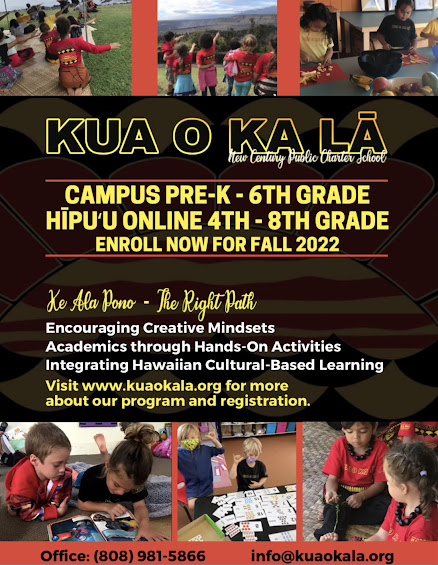 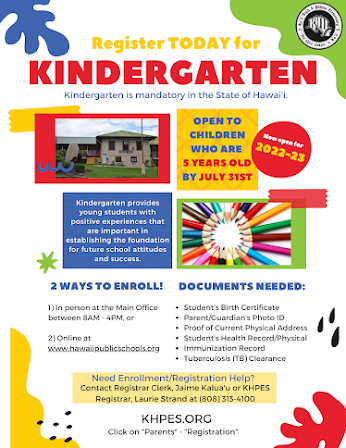 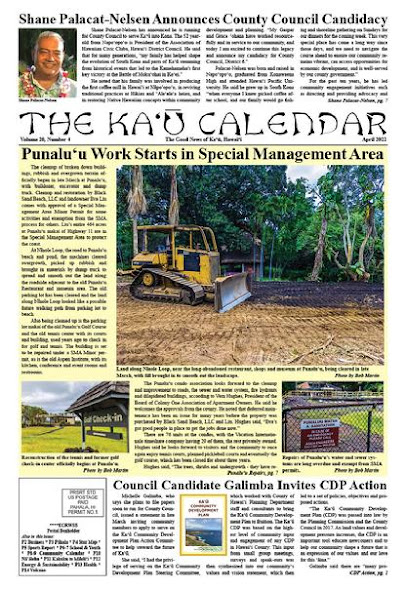 See The Ka'ū Calendar April edition at
www.kaucalendar.com, on newsstands and in the mail.
Posted by The Ka`u Calendar at 8:45 PM