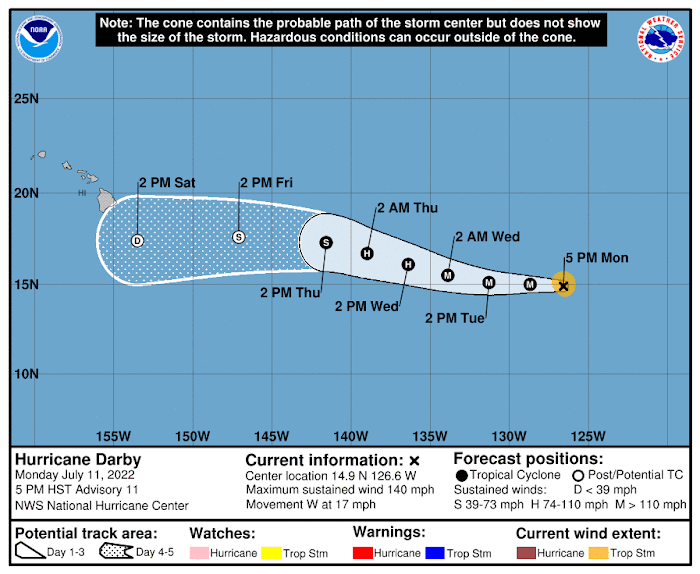 MAJOR HURRICANE DARBY IS TRACKING TOWARD HAWAIʻI ISLAND but is expected to lose intensity, become a Tropical Storm and arrive as a Depression on Saturday evening at 5 p.m.. On Monday, Darby was moving west at 17 mph with sustained winds of 140 mph about 1,825 miles east-southweast of South Point. Central Pacific Hurricane Center predicts that Darby will begin turning to a more west-northwest direction on Tuesday and move from the Eastern Pacific to the Central Pacific Basin on Wednesday.

The hurricane is very compact with hurricane force winds only extending 50 nautical miles from her eye. Darby "maintains a classic major hurricane structure with well-defined outflow in all quadrants, a symmetric cloud pattern, and a distinct small eye (less than 10 n mi in diameter). Satellite images indicate that the eye has become even more defined over the past few hours, but deep convection has been weakening a little to the west of the eye," says the 5 p.m. Hurricane Center update. "Darby is likely near its peak intensity. The major hurricane will be moving over progressively cooler waters and crossing the 26 degree C isotherm in about 24 hours. In addition, Darby will be moving into a drier airmass, which should accelerate the weakening trend. In a few days when Darby is over the central Pacific, a mid- to upper-level trough should induce strong westerly shear and cause Darby to become a post-tropical cyclone in about 4 days."

AN ACCIDENT INVOLVING AN ATV TOUR IN KAʻŪ was reported by Big Island Thieves Media on Sunday. At Waiʻōhinu Park, passersby said they saw a helicopter land, bringing a woman with an injured leg for assessment and treatment, along with her companion. Big Island ATV Southside Tours is one of at least two ATV tour companies operating in Kaʻū. The company provides riders from ten to 90 years of age with either double or single quads for the adventure, along with helmets, gloves, dust masks and bottled water. The cost starts at $200.
Tours go down the public Kaʻalualu Road and onto trails on Department of Hawaiian Home Lands and Kamehameha School property.
An online promotion for Big Island ATV Southside Tours posts the following: "Welcome to the Southern most area of the United States! Our tour will take you to places that tourists and locals alike have never visited. This is the REAL untouched Hawaii. The Southpoint area is where the Hawaiians originally landed on the Big Island. It's beautiful, warm, sunny and sometimes windy.

"Youʻll be crossing rugged lava flows and grassy fields, Ancient Kiawe forests with all the natural fauna and flora of The Big Island. Gorgeous aqua coastline with crashing waves worthy of photos, especially when the surfs up! If on a winter tour you might even see a whale or two. You will experience colorful tropical fish and green sea turtles visible from rugged lava cliffs as you peer into Shark Bay. We also do private family tours so book ahead so we have spaces available for you and your family. Get a little SUN and have a little FUN! Lets GO!" See the website for Big Island ATV Southside Tours at https://www.viator.com/tours/Big-Island-of-Hawaii/Big-Island-ATV-Southside-Tours/d669-358276P1?m=58932&nid=VR.16e43091-f2b3-4122-88e4-75e1d56f1d1e.TA_EMAIL_ATTRSUP?mcid=56757.
A review online in July says, "The hosts, Wes and Vicki were so knowledgeable about the island, and the terrain. The trails we took were rough at times, but that made the experience even better. The spots they took us to at the ocean, and bays were perfect, we even got to view the sea turtles at shark cove. We would recommend this tour to everyone, well worth the money."

AN OPPORTUNITY TO SIGN BOOKS OF CONDOLENCES in memory of the late former Prime Minister of Japan, Shinzo Abe, who was gunned down last week, is available through Hawaiʻi County, in partnership with the Honorary Consul General of Japan in Hilo, Art Taniguchi.
The last time the County of Hawaiʻi hosted Books of Condolences for Japan was in 2011, when The Great Tōhoku Earthquake destroyed more than 100,000 buildings and triggered a nuclear disaster.
Abe's Books of Condolences can be found in the Office of the Mayor in both Hilo and Kona and are open to the public for comment. After a week, the Books will be hand-delivered to the Consul General of Japan in Honolulu and sent off to Japan to be stored and archived for Prime Minister Abe and his ʻohana. The Books will be available to the public through Friday, July 15.
“We encourage anyone with a message of solidarity and unity for our Japanese brothers and sisters to come down to the Mayor’s office and share that message,” said Mayor Mitch Roth. “Prime Minister Abe was a friend to Hawaiʻi and the United States, and through that, there are many across our state who have been impacted by his sudden passing. Regardless of our differences with our elected officials, we should all stand against violence and join the Japanese community in memorial and mourning.”
The Hilo Honorary Consul General for Japan said, “Prime Minister Abe was well-respected domestically and internationally, and the world mourns the loss of a great leader and visionary. We are very thankful that Mayor Roth has allowed Books of Condolences in the Mayor’s Offices in Hilo and Kona from Tuesday through Friday. We encourage anyone who wishes to offer their condolences to please go into either the Hilo or Kona offices of the Mayor and share your thoughts during normal office hours.”

To read comments, add your own, and like this story, see  www.facebook.com/kaucalendar. See latest print edition at www.kaucalendar.com. See upcoming events at https://kaunewsbriefs.blogspot.com/2022/04/upcoming-events-for-kau-and-volcano.htm.