THE NEARLY SIMULTANEOUS SHUTDOWN OF MAUNA LOA AND KILAUEA ERUPTIONS is the subject of this week's Volcano Watch, written by scientists and affiliates of USGS Hawaiian Volcano Observatory:
The Island of Hawai'i recently went from having two actively erupting volcanoes that caught the attention of both local residents and the world, to having none. However, our volcanoes are still active and will erupt again, so volcano awareness should not be put on the backburner, so-to-speak. When volcanoes in Hawai'i aren't erupting, it is time to consider (and prepare for) where and when the next eruption could be.
For decades, Kīlauea was the only erupting volcano in Hawai'i, but it is one of six active Hawaiian volcanoes that HVO monitors! Mauna Kea erupted several thousand years ago, Haleakalā erupted several hundred years ago, Hualālai erupted a couple of centuries ago, Kama'ehuakanaloa (formerly Lō'ihi Seamount) erupted in 1996, and—until very recently—Mauna Loa had last erupted in 1984.
Prior to November 27, 2022, staff at HVO and Island of Hawai'i residents and visitors alike wondered when and where the next eruption of Mauna Loa would be. Now, with the first eruption in 38 years of Earth's largest active volcano behind us, what have we learned?
Volcano Awareness Month programs will address this question and others. Join us at one of the events being offered in Hilo, Kailua-Kona, Ocean View, Pu'uhonua o Hōnaunau National Historic Park, and Hawai'i Volcanoes National Park. Or take some time during the month of January to personally reflect on how volcanic activity in Hawai'i can impact you.
Mauna Loa's recent eruption has reminded Island of Hawai'i residents and visitors that emergency preparedness cannot be overemphasized. An important aspect of preparedness is being aware of the hazards that can impact you where you live but also where you work and your commute.
The Mauna Loa eruption threatened the Danial K. Inouye Highway (Saddle Road), a major thoroughfare connecting the east and west sides of the Island of Hawai'i. From the Highway, views of the eruption were spectacular and a stark reminder of how life on the Island of Hawai'i can be impacted very quickly by volcanic activity.
Fortunately, the lava flow-front stalled, and the Northeast Rift Zone eruption of Mauna Loa ended before the highway was impacted. But consider how your life might have changed had the eruption continued and covered the road. It's important to remember that Mauna Loa's slopes cover more than half of the Island of Hawai'i and future eruptions have the potential to directly impact almost every district on the island.
This Mauna Loa eruption accompanied an eruption within Halema'uma'u crater at the summit of Kīlauea. While there were signs that the Kīlauea eruption was waning before the Mauna Loa eruption began, lava supply appears to have ceased for both eruptions within about a day. What does that mean for future volcanic activity?
We know that the two volcanoes have separate shallow magma systems but it's possible that they influence one another through stresses associated with their eruptions—essentially, when one volcano expands or contracts, it puts pressure on or off the other volcano.
Though lava supply to Halema'uma'u appears to have paused, passive overturns of the lava lake surface continue as the dense cool crust sinks beneath the hot and buoyant magma below. During these overturns, the molten material beneath Halema'uma'u crater floor is temporarily exposed, making it appear that the eruption has resumed.
Now, HVO staff and residents are wondering what will happen next? Will Mauna Loa will take another long break or enter a phase of more frequent eruptions? Will the lava lake at Kīlauea summit start to grow again? We'll be monitoring the volcanoes closely for clues and keep you informed.
We hope to see you at a Volcano Awareness Month program this January. The schedule is forthcoming and will be posted at usgs.gov/hvo, where you can also read volcano updates, view monitoring data, learn geologic histories, see photos and videos, and much more.

Volcano Activity Updates
Mauna Loa is not erupting. Its USGS Volcano Alert Level is at ADVISORY. Mauna Loa updates are issued weekly on Thursdays.
Webcam imagery shows residual incandescence and no lava movement in the fissure 3 vent on the Northeast Rift Zone. The inactive main flow front still glows at a few spots at night and may inch northward very slowly as it continues to settle. Sulfur dioxide (SO2) emission rates are at background levels. Summit and Northeast Rift Zone inflation is slowing. For Mauna Loa monitoring data, see: usgs.gov/volcanoes/mauna-loa.
Kīlauea is not erupting. Its USGS Volcano Alert level is at ADVISORY. Kīlauea updates are issued weekly on Tuesdays.
Lava supply to the Halema'uma'u lava lake in Hawai'i Volcanoes National Park ceased on December 9. Sulfur dioxide emission rates have decreased to near pre-eruption background levels and were last measured at approximately 200 tonnes per day (t/d) on Dec. 14. Seismicity is elevated but stable, with few earthquakes. Over the past week, summit tiltmeters recorded several deflation-inflation (DI) events. For Kīlauea monitoring data, see usgs.gov/volcanoes/kilauea.    There was one earthquake with 3 or more felt reports in the Hawaiian Islands during the past week: a M3.3 event 11 km (7 mi) E of Pāhala at 34 km (21 mi) depth on Dec. 14 at 11:45 a.m. HST.
HVO continues to closely monitor the ongoing eruptions at Kīlauea and Mauna Loa.
Visit HVO's website for past Volcano Watch articles, Kīlauea and Mauna Loa updates, volcano photos, maps, recent earthquake info, and more. Email questions to askHVO@usgs.gov.
To read comments, add your own, and like this story, see facebook.com/kaucalendar. See latest print edition at kaucalendar.com.
PARTICIPATE OR WATCH HOLIDAY PARADE OF LIGHTS in Discovery Harbour this Saturday, Dec. 17. Participants gather at Discovery Harbour Community Center at 5:30 p.m. for photos and maps - see route map, left. Parade Starts at 6 p.m. Hot cocoa, cookies, and carols at the center after the parade. Restrooms at the center open for duration of the parade.
Participating vehicles must maintain a speed of five to ten miles per hour. All participants (except Santa) must stay in their vehicles during the parade. See flyer, below.

UPCOMING EVENTS
Christmas Lights & Icons Show brightens up the corner of Lehua and Palm in Ranchos at Ocean View every evening. Santa will be there on Christmas Eve to give 300 gifts, with a drawing for bikes to be given on Christmas Day. See story at kaucalendar.com.
Holiday Lighting and Decor are dressing up the cottages at Kīlauea Military Camp for the public to see until the New Year. See story at kaucalendar.com.
Christmas in the Country is ongoing until the New Year at Volcano Art Center Gallery and VAC's Ni'aulani Campus. See story at kaucalendar.com.
A Toy Drive is Ongoing at Cooper Center on Wright Road in Volcano through Saturday, Dec. 18. Unwrapped toys can be dropped off from 8:30 a.m. to 11 a.m. Monetary donations accepted. Toys purchased online can go to Cooper Center Community Pantry, P.O. Box 1000, Volcano, HI 96785.
The Hiking Incentive Program at Kahuku Unit of Hawai'i Volcanoes National Park wraps up at the end of year. For the Kūkini Challenge, hikers, and walkers can turn in miles, recording them at the Visitor Contact Station for a chance to win a silver water flask and accolades for the fourth quarter of 2022. Walk into the Past with Thomas A Jaggar to 1939. Talk with the founder of the Hawaiian Volcano Observatory, Dr. Thomas A. Jaggar, at the edge of Kīlauea volcano on Fridays, Dec. 16 and 23, at 10 a.m. and noon. Dressed in period costume, actor Dick Hershberger brings the renowned geologist to life. Space is limited; pick up free tickets at the Kīlauea Visitor Center lānai the day of the program. Supported by Kīlauea Drama Entertainment Network.
Christmas Keiki Party at St. Jude's Church in Ocean View on Saturday, Dec. 17 from 9 a.m to 11 a.m. with Giving Tree.

A Night Christmas Parade in Nā'ālehu will be held on Saturday, Dec. 17, sponsored by Ka'ū Roping & Riding and featuring lights and displays after dark. 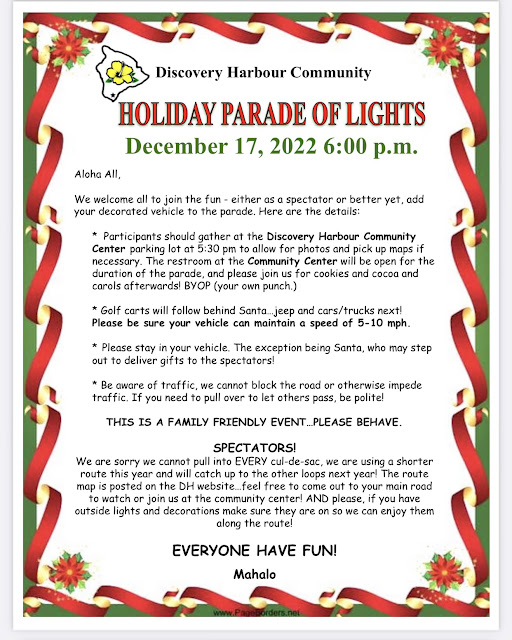 Learn About Using Fungicides to Protect Coffee Plants on Monday, Dec. 19 and Tuesday, Dec. 20. Webinar is on YouTube or one can attend via Zoom or in-person in Hilo and Waimea, with in-person or Zoom participation in a Q&A session each day: Monday at 2 p.m. or Tuesday at 9 a.m. Event is free and open to all. Register at hawaiicoffeeed.com/priaxor.
Volcano Thursday Market Christmas Fair will be Friday, Dec. 23 from 3 p.m. to 6 p.m. Event offers crafts, food, produce, live music, and entertainment for kids at Cooper Center in Volcano, Wright Road.

Showers, Soup, Haircuts, and Decorating of St. Jude's Church in Ocean View on Christmas Eve from 9 a.m to 1 p.m., with carols at 3 p.m. and Christmas Eve Service at 4 p.m, followed by Aloha Hour.
FREE FOOD

St. Jude's Hot Meals are free to those in need on Saturdays from 9 a.m. until food runs out, no later than noon. Volunteers from the community are welcome to help and can contact Karen at pooch53@gmail.com. Location is 96-8606 Paradise Circle Drive in Ocean View.
Ka'ū Food Pantry Distribution, Tuesday, Dec. 27, 9:30 a.m. until pau at St. Jude's Episcopal Church above Kahuku Park in Ocean View. Sponsored by Hawai'i Island Food Basket.

Free Meals Mondays, Wednesdays, and Fridays are served from 12:30 p.m. to 3:30 p.m. at Nā'ālehu Hongwanji. Volunteers prepare the food provided by 'O Ka'ū Kākou with fresh produce from its gardens on the farm of Eva Liu, who supports the project. Other community members also make donations and approximately 150 meals are served each day, according to OKK President Wayne Kawachi.
See daily, weekly, and monthly events, outdoor markets, and more on page 8 and page 9 of the monthly print edition.
Posted by The Ka`u Calendar at 10:26 PM