HAWAIʻI RANKS 18TH IN STATES NEEDING EMPLOYEES, according to a WalletHub study released on Wednesday. According to WalletHub, "Lots of businesses are struggling to hire enough workers, which has sometimes led to delays in services and reduced business hours. In fact, the labor force participation rate has experienced the slowest recovery of any recession since World War II. Some businesses aren’t even able to keep the employees they already have – as Americans are quitting their jobs at record rates in what's been dubbed the Great Resignation."
In order to see where employers are struggling the most in hiring, WalletHub compared the 50 states and the District of Columbia based on the rate of job openings for both the latest month and the last 12 months.
States struggling the most to find and keep employees include Alaska, ranking number one, followed by Kentucky, Georgia, Montana, Iowa and West Virginia. The places with the fewest problems in keeping jobs filled are New York, D.C., Connecticut, New Jersey, Pennsylvania and Washington. See the full report at https://wallethub.com/edu/states-employers-hiring/101730.

HUMANS HONORING THEIR ANCESTORS is the theme of a painting by an artist and student at Kamehameha Schools Hawaiʻi. The art, which is on display for 11 months in the U.S. Capitol, is by Luluka Brown-Spielman, a junior at Kamehameha.
She won first place for Hawaiʻi's Second Congressional District in the Congressional Institute's nationwide, annual high school art competition. Every spring, it recognizes and encourages artistic talent in each congressional district across the nation. Since the Artistic Discovery competition began in 1982, more than 650,000 high school students have participated.
“Luluka has had a pretty stellar year with her arts. This is her second juried show that she has been accepted into this year! The first was at Kahilu Theatre/Gallery in Waimea," said KS Hawaiʻi art kumu Carl Pao. “So joyous for all of her hard work and dedication to recognized both locally, and now, D.C.!”
Congressman Kaialiʻi Kahele announced the winner on Wednesday. "On behalf of the people of Hawaiʻi, I want to offer a big congratulations to Luluka on being this year's winner of the Congressional Art Competition. In Hawaiian culture, honoring those who have come before us is an important practice, and Luluka's beautiful piece captures that relationship. I am especially proud that her artwork will be displayed in our nation's Capitol Building to represent the Aloha State. Mahalo to all of the extremely talented artists 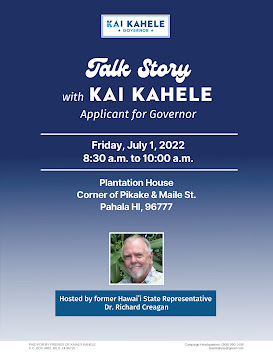 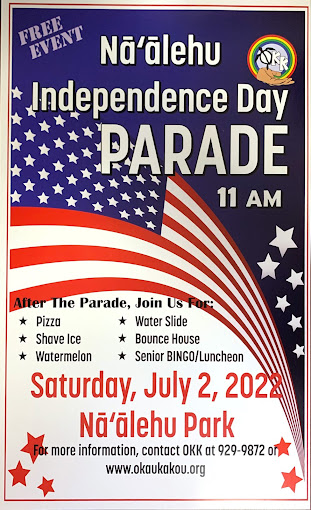 VOLCANO VILLAGE FOURTH OF JULY PARADE welcomes walking and riding groups and individuals. It is sponsored by Volcano Community Association in Volcano Village from 8:30 a.m. to 1 p.m.. The Monday, July 4 parade starts at the Post Office at 9 a.m. and ends at Cooper Center on Wright Rd., followed by Cooper Center's Independence Day celebration packed with live entertainment, craft and food vendors, keiki games and a large silent auction from 9 a.m. to 11:30 a.m. Parking maps can be found at www.thecoopercenter.org. (No parking at Cooper Center except handicap permitted vehicles with prior reservation.)
SPONSOR A BUCKLE, VOTE FOR RODEO QUEEN ahead of the Saturday, July 9 Rodeo organized by Kaʻū Roping & Riding Association and ʻO Kaʻū Kākou. Event to be held on the rodeo grounds behind Nāʻālehu Park. Call 808-854-7917.

BECOME A SPONSOR AT THE 3RD ANNUAL EXPERIENCE VOLCANO FESTIVAL on Saturday, July 30th and Sunday, July 31st from 10 a.m. to 4 p.m. each day. Last year, over 2,500 visitors attended and over 40 events were featured during the EVH festival. Sign up as a sponsor at experiencevolcano.com. If you have questions, contact experiencevolcano@gmail.com.
All vendor locations are taken.
SIGN UP FOR KAʻŪ COFFEE TRAIL RUNS with a change of date from July 3 to Sept. 17. Registration deadline for the annual event is Sept. 14. Organized by Hawaiʻi Island Racers, the 50K begins at 6 a.m., Half Marathon at 7 a.m., and 5K at 7:15 a.m., all starting from Kaʻū Coffee Mill at 96-2696 Wood Valley Road in Pāhala. Proceeds go to support ʻO Kaʻū Kākou. For more details on the event and registration fees, visit https://www.kaucoffeetrailruns.com/.
SEE EVENTS IN KAʻŪ & VOLCANO at https://kaunewsbriefs.blogspot.com/2022/04/upcoming-events-for-kau-and-volcano.html 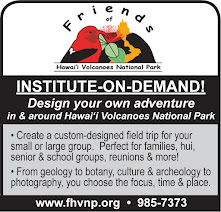