KAʻŪ FARMERS CAN APPLY FOR TRAINING in the Beyond Organic Program, led by Dr. Jana Bogs, a Kaʻū resident with a PhD in Horticulture & Food Science. Bogs states that "Scientific studies show our foods have lost up to 70% of their nutritional content over the last 70 years, even organic foods. Simply growing organically isn’t enough."
The program includes soil analysis for 17 minerals and microbiology, plus side-by-side trials on farmers' lands. Bogs said she has been awarded grant funding "to train Big Island farmers to help them produce more and better quality foods for all of us." She said that through the Beyond Organic Growing System, "Not only does the foods' nutritional content increase greatly, so does the volume of crop production.
"Other qualities, such as flavor, texture and shelf life, also improves. The farmers have fewer problems with crop pests and diseases. The resulting foods are aptly called Nutrition Grown."
After the trials and soil analysis, "Precise amounts of organically-approved soil amendments are added to optimize the soil. Then watch the magic happen!" said Bogs.
Bogs said she envisions "making the Big Island a showcase to the world of Nutrition Grown agricultural production. The varied climates and visitor infrastructure make our island an ideal location for expanding knowledge of sustainable agriculture." She said she envisions a visitors' center with a store, restaurant, educational area and tour desk.
The training includes 19 half-hour teaching videos online, her ebook Beyond Organic: Growing for Maximum Nutrition and Flavor; interactive Zoom calls with Bogs and other farmers in the program; the soil analysis and side by side-by-side trials with plant tissue nutrient analysis of crop from the farmer's trial garden compared to USDA values; and certification upon successful completion.
See the website BeyondOrganicResearch.com and the blog on past farm trials. To apply for the program, contact Bogs at info@BeyondOrganicResearch.com or call her at 808-938-9888.
BLUES BEAR HAWAI'I AND ITS FOUNDER LES HERSHHORN OF VOLCANO are bringing a legendary rock musician Bill Kirchen to Hawai'i Island. Kirchen is called Titan of the Telecaster. Writer Paul Crepeau tells more:
When speaking of the most influential guitar-players﻿ in the history of rock, it would almost be a crime to overlook Bill Kirchen. Born in Bridgeport, Connecticut in 1948, Kirchen is recognized by many as a true pioneer of country rock and Americana music. Dubbed the Titan of the Telecaster for his prowess on the instrument, he strangely enough began his musical journey playing classical trombone, attending Interlochen Center for the Arts in Michigan in the early 1960s. It would seem that the deep, low sound of the instrument groomed him for a life of performing on the low end, which became his claim to fame on the Telecaster.
At the age of 16, Kirchen rescued his mother's old banjo from the attic, acquired a copy of Pete Seeger's instructional book How to Play the 5-String Banjo, and hitchhiked to the 1964 Newport Folk Festival. The experience left an indelible impression on his young mind. In his words, "I witnessed stuff that knocked me out: Lightnin' Hopkins, the Kweskin Jug Band, Son House, Johnny Cash, the Staples Singers—my original guitar hero Mississippi John Hurt. The top of my head flipped open and it's never shut. It ruined me for normal work."
While in high school in Ann Arbor, Michigan, Kirchen experimented with a variety of music groups, including a jug band and a rock band. The creativity continued on into college at the University of Michigan, where he met George Frayne and John Tichy (who played keyboards and guitar respectively),
with whom he would co-found the band Commander Cody and His Lost Planet Airmen. After graduation, however, the three of them headed in different directions, with Kirchen making his way towards San Francisco, where he acquainted himself with musical acts such as the Grateful Dead, Dan Hicks, and Jefferson Airplane. Convinced that the Lost Planet Airmen could make it out there as well, he called Frayne and Tichy, who were back East, and persuaded them to join him. As soon as the band reunited, they started playing regular night-club gigs in the Bay Area. In 1969 they were added to the Berkeley Folk Festival lineup, and two years later they scored their first record deal with the album Lost in the Ozone on the Paramount label. But the best was yet to come when, in 1972, the song Hot Rod Lincoln became a major hit for them. Written by American songwriter Charlie Ryan, it describes a drive north on California Interstate 5 that ends up as a hotrod race between a Lincoln and a Cadillac. Those of us who remember hearing it on the radio 50 years ago will never be able to get that chugging, low-end rockabilly rhythm of Kirchen's Telecaster out of our head!
Commander Cody and His Lost Planet Airmen became known as one of the most eclectic bands in rock history, with genre-bending songs ranging in date from the Great Depression to the 1960s San Francisco scene. Incorporating country and rock into a trippy blend of rockabilly, they played an important role in the revival of Western swing, while at the same time acquiring the reputation of being musical "outlaws." (Their 1974 album Live from Deep in the Heart of Texas, recorded at the legendary Armadillo World Headquarters in Austin, made Rolling Stone magazine's list of the 100 best albums of all time.) Since their high-energy tunes included more than a few from the truckin'-song category, their musical style came to 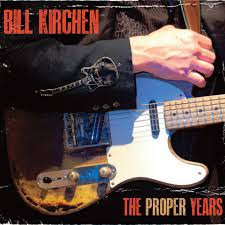 be known as "dieselbilly." Although the band had up to eight members at any given time, it was the legendary Telecaster of Bill Kirchen that gave them their trademark sound. Not to be overlooked, however, were his contributions as a vocalist. George Frayne (a.k.a. Commander Cody) was typically the frontman, but on songs such as Mama Hated Diesels and Down to Seeds and Stems Again Blues, listen to the way Kirchen handles lead vocals with the bravado of a true country crooner.
Following the breakup of Commander Cody and His Lost Planet Airmen in 1976, Kirchen went on to form a "swing orchestra" called the Moonlighters and began a decades-long relationship with British new-wave artist Nick Lowe. Not only did Lowe produce the Moonlighters' second album Rush Hour, but Kirchen went on tour with him and would occasionally accompany him in the studio as well. It was during this time period that Kirchen was also invited to work on album projects with the likes of Gene Vincent, Link Wray, and Elvis Costello.
After relocating to the vicinity of Washington, D.C. in 1986, Kirchen formed the band Too Much Fun, with John Previti on bass and Dave Elliot on drums. A decade later they received ten Washington Area Music Awards. Kirchen had become associated with many D.C. guitarists, such as the late Roy Buchanan and Danny Gatton, Jimmy Thackery, Billy Hancock, Link Wray, and others who had forged an elite fraternity of local roots-rock performers.
After several album releases, including the critically acclaimed Have Love, Will Travel in 1996 (Hightone Records), Kirchen kicked off a new recording deal with Proper Records in 2006 with the
release of the album Hammer of the Honky-Tonk Gods. Recorded at Proper's London studio, the album features Kirchen accompanied by a band with Nick Lowe. In 2010 came another album, Word to the Wise,
which featured numerous guests, including Dan Hicks, Paul Carrack, Maria Muldaur, Elvis Costello, and Commander Cody himself (George Frayne). A 2013 release titled Seeds and Stems includes a guest appearance by Jorma Kaukonen.
More recently, in 2017, Kirchen teamed up with his old songwriting partner from the Moonlighters, keyboardist Austin de Lone, for a collaborative effort titled Transatlanticana (Last Music Company). The album was cut in Austin and London with musicians from both sides of the Atlantic pitching in. Although hailing from the Philadelphia area, de Lone, like Kirchen, has longtime ties with the U.K. scene. As the founder of the band Eggs Over Easy, he is considered to be the progenitor of British pub-rock. The songs on Transatlanticana represent the core components of Americana music—rock, country, rhythm and blues, and even a gospel tune. The opening track, Hounds of the Bakersfield, is a tribute to the late Merle Haggard and the acclaimed Bakersfield sound. On another track, Lubbock, Texas native Butch Hancock sings a duet of his song Oxblood with Kirchen in a tasty slice of Texas boogie. There are also some homages paid to Bill and Austin's counterculture past with Back in the Day, written by Kirchen's wife, as well as a rendition of Bob Dylan's The Times They Are A-Changin' that is exceedingly energetic and heartfelt.
Transatlanticana is a fun and interesting album to listen to, with something different at every turn, yet still respectful to the traditions of both country and rock 'n' roll. It is about as close as one can come to having a ringside seat to a group of musically like-minded, top-of-their-game players enjoying each other's company.
Bill Kirchen's musical influence has been profound, to say the least. He is said to have "one of the most distinctive, pure Fender Telecaster tone guitar-sounds in modern music." His "dieselbilly" sound combines elements of blues, country, rockabilly, boogie woogie, and Western swing. His legendary work with Commander Cody and His Lost Planet Airmen helped to pave the way for such artists as Willie Nelson, Merle Haggard, the Allman Brothers, and other country "outlaw" bands. And his story continues. Whether he is producing for other artists, recording material of his own, or touring and forging connections with audiences, Bill Kirchen, the "Titan of the Telecaster," continues to do what he has done for nearly his entire life—bring joy to people everywhere through his gift of music.
For an overview of much of Bill Kirchen's music during the past 15 years, check out his most recent releases from 2020: The Proper Years, and Waxworks—the Best of the Proper Years. (Available on The Last Music Company Ltd.)
On Saturday, Nov. 12, Kirchen will be giving a performance as the frontman of his trio at Hilo's Palace Theater. (The doors open at 6 p.m. and the show starts at 7:30 p.m. Tickets are $35 for general admission and $55 for Gold Circle seating.) Information regarding this show and how to purchase tickets can be found at http://www.bluesbearhawaii.com or call (808) 896-4845.
Big Island Ticket Outlets are at Palace Theater Box Office, Mon.-Fri. 10 a.m. to 3 p.m. See
www.hilopalace.com or call (808) 934-7010. Also buy tickets at Hilo Music Exchange, Kona Music Exchange, Kiernan Music in Kainaliu, Waimea General Store in Parker Square in Kamuela, and Rogers Guitars in Pahoa.
To read comments, add your own, and like this story, see www.facebook.com/kaucalendar. See latest print edition at wwwkaucalendar.com. See upcoming events at https://kaunewsbriefs.blogspot.com/2022/04/upcoming-events-for-kau-and-volcano.html.


THE U.S AND HAWAI'I STATE FLAGS WILL BE FLOWN AT HALF-STAFF to honor fallen firefighters at the direction of the President of the United States and Gov. David Ige this Sunday, Oct. 9, the day of the annual National Fallen Firefighters Memorial Service in Emmitsburg, Maryland.
"With every fire related disaster, our firefighters, law enforcement officers, and emergency medical first responders risk their lives to keep our communities safe. Let us all take the time to honor the selflessness and bravery of these individuals and reflect on the importance of practicing fire prevention and safety," said Hawai'i's governor.
To read comments, add your own, and like this story, see www.facebook.com/kaucalendar. See latest print edition at wwwkaucalendar.com. See upcoming events at https://kaunewsbriefs.blogspot.com/2022/04/upcoming-events-for-kau-and-volcano.html.