HAWAIʻI VOLCANOES NATIONAL PARK DREW 1.3 MILLION VISITORS in 2021, says the latest National Park Service report, which notes that those coming to the park spent an estimated $117 million in local communities. "That local spending supported 1,220 jobs, mostly in recreation, lodging and transportation, with a total benefit to the island of Hawaiʻi of $154 million," says the Park statement released on Tuesday.
"Hawaiʻi Volcanoes National Park is a World Heritage Site cherished by visitors and our community who come to discover the active volcanoes of Kīlauea and Mauna Loa, and the incredible natural and cultural resources that extend from sea level to summit," said Superintendent Rhonda Loh. "Visitor spending benefits the island economy, and visitors who recreate responsibly, plan ahead and respect this sacred Hawaiian landscape also benefit the national park."
The report on Hawaiʻi Volcanoes comes from the 2021 National Park Visitor Spending Effects report,  an annual peer-reviewed economics report prepared by economists from the U.S. Geological Survey and the National Park Service. It includes information by parks and by states on visitor spending, the number of jobs supported by visitor spending and other statistics. 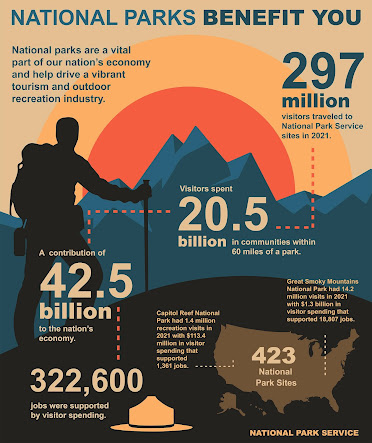 Across the nation, visitor spending in communities near national parks resulted in a $42.5 billion benefit to the nation's economy and supported 322,600 mostly local jobs, according to the report.
The eight national park units in Hawaiʻi welcomed 3.9 million visitors in 2021 who spent an estimated $438 million in local gateway communities. This spending supported a total of 4,610 jobs, and had a cumulative benefit to the state of Hawaiʻi of $607 million, the report states.
The statement recommends that the public "Find out more about Hawaiʻi Volcanoes National Park and how to plan like a park ranger during the busy summer months by visiting the park website. The current eruption from Kīlauea volcano continues to attract thousands of visitors each day. A massive lava lake within the summit crater, Halemaʻumaʻu, can be viewed from a safe distance from numerous vantage points along the crater rim. Parking lots and overlooks often fill up during peak hours of 10 a.m. to 8 p.m." See www.nps.gov/havo.

About the National Park Service: More than 20,000 National Park Service employees care for America's 423 national parks and work with communities across the nation to help preserve local history and create close-to-home recreational opportunities. Learn more at www.nps.gov, and on Facebook, Instagram, Twitter, and YouTube.
To read comments, add your own, and like this story, see www.facebook.com/kaucalendar. See latest print edition at www.kaucalendar.com. See upcoming events at https://kaunewsbriefs.blogspot.com/2022/04/upcoming-events-for-kau-and-volcano.html.
TWO FULL TIME POSITIONS ARE AVAILABLE AT HAWAIʻI VOLCANOES NATIONAL PARK.
One job is with the Natural and Cultural Resources Management programs which seeks a permanent full-time Budget Technician. Go to USAJobs.gov for the details, the application closing date is 7/2/22:
https://www.usajobs.gov/job/661802400
The Park is also seeking a permanent full-time permanent Maintenance Mechanic Supervisor. Visit this link on USAJobs.gov for more information:
https://www.usajobs.gov/job/661202400
USAJobs.gov is the official employment website of the federal government. Other jobs within the park and other National Park Service locations are also listed on this site. 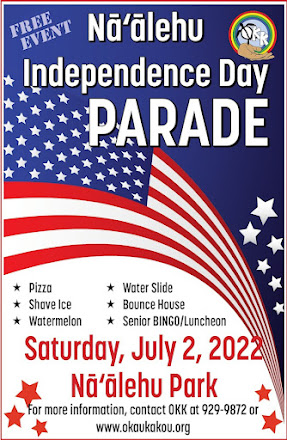 VOLCANO VILLAGE FOURTH OF JULY PARADE welcomes walking and riding groups and individuals. It is sponsored by Volcano Community Association in Volcano Village from 8:30 a.m. to 1 p.m. The Monday, July 4 parade starts at the Post Office at 9 a.m. and ends at Cooper Center on Wright Rd., followed by Cooper Center's Independence Day celebration packed with live entertainment, craft and food vendors, keiki games and a large silent auction from 9 a.m. to 11:30 a.m. Parking maps can be found at www.thecoopercenter.org. (No parking at Cooper Center except handicap permitted vehicles with prior reservation.)
SPONSOR A BUCKLE, VOTE FOR RODEO QUEEN ahead of the Saturday, July 9 Rodeo organized by Kaʻū Roping & Riding Association and ʻO Kaʻū Kākou. Event to be held on the rodeo grounds behind Nāʻālehu Park. Call 808-854-7917.
BECOME A SPONSOR AT THE 3RD ANNUAL EXPERIENCE VOLCANO FESTIVAL on Saturday, July 30th and Sunday, July 31st from 10 a.m. to 4 p.m. each day. Last year, over 2,500 visitors attended and over 40 events were featured during the EVH festival. Sign up as a sponsor at experiencevolcano.com. If you have questions, contact experiencevolcano@gmail.com. All vendor locations are taken.
SIGN UP FOR KAʻŪ COFFEE TRAIL RUNS with a change of date from July 3 to Sept. 17. Registration deadline for the annual event is Sept. 14. Organized by Hawaiʻi Island Racers, the 50K begins at 6 a.m., Half Marathon at 7 a.m., and 5K at 7:15 a.m., all starting from Kaʻū Coffee Mill at 96-2696 Wood Valley Road in Pāhala. Proceeds go to support ʻO Kaʻū Kākou. For more details on the event and registration fees, visit https://www.kaucoffeetrailruns.com/.
SEE EVENTS IN KAʻŪ & VOLCANO at https://kaunewsbriefs.blogspot.com/2022/04/upcoming-events-for-kau-and-volcano.html
LEARN MORE ABOUT SPONSORS OF THE KAʻŪ CALENDAR
at http://kaunewsbriefs.blogspot.com/2022/05/sponsors-of-kau-calendar.html