THE HEALTH AND ECONOMIC WELL BEING OF MICRONESIANS and other South Pacific islanders who have moved to Hawaiʻi was the focus of the 21st annual Kaʻū Rural Health Community Association meeting last Friday at .
Keynote speaker was Neal Palafox, MD, MPH, a Professor at University of Hawaiʻi John A. Burns School of Medicine's Department of Family Medicine & Community Health. He spent decades studying and working with Pacific Islanders to improve their health and economic situation.
Palafox talked about the strategic importance of numerous South Pacific islands to the military after World War II, when more than a decade of nuclear bomb testing was conducted in the islands. After the nuclear testing stopped, the government promised to help with economic development, health, and education for the islanders.
The  maintains large military bases in the Micronesia and views them as important to the future, especially with Chinese government and companies making inroads into the Pacific. In exchange for keeping the bases, and for mitigation for the nuclear testing that made some islands uninhabitable, the allows residents of many of the islands to come to this country without a passport or visa, to live, work, and gain an education here. At first, the federal government paid for their health care, then the states chipped in as the federal government withdrew some of its support.
Some of the islanders went to places like , where they were hired by large companies like Tysons Foods and became factory workers. In Arkansas, the Marshallese, in particular have done well there in terms of being lifted out of poverty, though far away from their island culture of subsistence farming and fishing.
On Hawaiʻi Island, many of the families live remotely. Ocean View is one place where they found affordable land to create housing for extended families. The children go to  Schools. Some of the parents and grandparents work picking Kaʻū Coffee.
One problem brought up in the meeting is the assimilation of the children into the education system. With poor English skills upon arrival, they need more support through speakers of their own dialects, several attendees stated. Sometimes they are bullied and feel discrimination from other students and even teachers, Palafox said. He said that throughout Hawaiʻi there are many Micronesian jokes, online insults such as "Micronesian Cockroaches Go Home." People ask "How do we get them to go elsewhere?" and say,  "Send these people a message," and "Stop them from coming." These islanders are often blamed for being the biggest cause of homelessness in Hawaiʻi, Palafox said.
He noted that one difference between Micronesians here and other immigrants is that most other immigrants have to apply for a visa and are sponsored by families already here.  They often arrive with a job waiting for them. With the Pacific Islanders who have free entry to the , "we are getting the entire demographic," the middle class and the poor, the skilled and unskilled, said Palafox, "with their need for more education, employment training, health care, and assistance with assimilation.
Palafox introduced the idea of Cultural Safety with mediating variables to help the islanders. Among them are self-determination, social and restorative justice, equity, negotiated partnership, transparency, reciprocity, accountability, and resilience.
Johnathan Jackson, one of the leaders of the Marshallese in Ocean View, talked about the attempt to maintain some of the traditional culture while living here. The Micronesians, for example, are well regarded as master navigators in the South Pacific. It is ironic that they would have a hard time being accepted here.
Palafax said that health statistics are bleak among the islanders before and after they come here. He said they are affected by the worst of both worlds: cholera, dengue fever and tuberculosis in their less developed tropical home islands, and the poor diet of modern society with more diabetes, stroke, and cancer.
Jesse Marques, founder of Kaʻū Rural Health Community Association, and physician Richard Creagan, who represents Ocean View in the state House of Representatives and worked in the Peace Corps in the Marshall Islands, vowed to work more with the Marshallese and other islanders who have moved here.
See more on Kaʻū Rural Health Community Association at krhcai.com.

MEMORIAL DAY IN KAʻŪ included ceremonies at Kilauea Military Camp and messages from two military reserve public officials, both running for national office. Congresswoman Tulsi Gabbard's campaign team for U.S. president released a statement about her recent farewell to nearly 200 soldiers from the Hawaiʻi Army National Guard's 1st Battalion, 487th Field Artillery Regiment. It is the same unit she deployed with to the Middle East. These soldiers headed to  many, it is their third or fourth deployment.
As a soldier for over 16 years, Gabbard served in in 2005 in a medical unit "where she was confronted everyday by the high human cost of war. On Memorial Day, we honor those who have paid the ultimate price in service to their country, and those who continue to put their lives on the line for our country every day. As Tulsi reminds us, it's the little things that don't make the headlines that also take a toll – like missing your child's first steps, seeing them off to school, or teaching them how to drive."
The statement says that Gabbard is "running for president to bring an end to more counterproductive regime change wars, the new cold war, and arms race. Our servicemen and women don't need lip service from warmongering politicians and media pundits who feign concern while simultaneously fomenting conflicts around the globe. These conflicts threaten to send our men and women in uniform into harm's way for no other purpose than power and profit. The true way to honor our troops who have and continue to put their lives on the line for our country is to work to prevent unnecessary costly wars and resolve that war should only be waged as a very last resort to keep the American people safe."
State Sen. Kai Kahele, who is running to take Gabbard's place in the U.S. House of Representatives, issued a statement saying, "This Memorial Day, we honor and remember the men and women of the U.S. Armed Forces who have made the ultimate sacrifice in defense of our freedom and our nation. We remember their courage, their strength, and their love of country.
"Just as in years gone past, we decorate each memorial, each gravesite with a flag, flowers, or a lei. We lower our flags to half staff and we pay tribute to those who gave their all in service to a grateful nation. The observance of their names, the acknowledgment of their contribution during their shortened lives, and the recognition of their sacrifice is the highest honor we can give them.
"When we think about them, for a moment they live again, in our memories, in our imagination, and our hearts while stirring up our pride, our patriotism, and maybe a tear. As their extraordinary courage and sacrifice are etched in our memories, they live on forever."
Kīlauea Military Camp held Memorial Day ceremonies followed by a Memorial Day Buffet. The keynote speaker was Lt. Col. Loreto Borce, Jr., commander of Pōhakuloa Training Area.

JUST ANNOUNCED
THE SKY IS FULL OF STORIES with James McCarthy happens Friday, June 28, , at Nāʻālehu Public Library, 95-5669 Mamalahoa Hwy. The free, 45 minute program, suitable for all ages, features McCarthy telling "sky stories from myths to science." McCarthy is a founding storyteller of Honolulu Zoo's Moonlight Tours and Snooze in the Zoo, which "bring to life the stories that are found in the skies." Young children must be accompanied by a parent or adult caregiver. Contact 939-2442 for more. 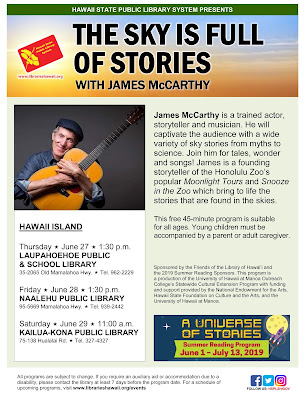 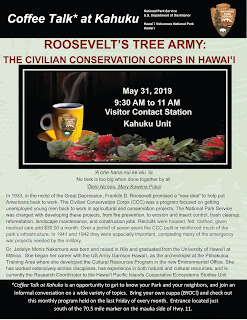 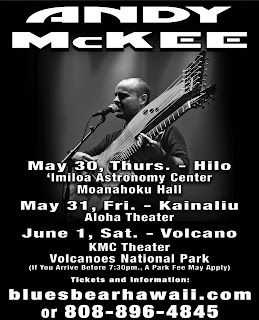 SATURDAY, JUNE 1
Summer Reading Program: A Universe of Stories, June 1-July 13, all Hawai‘i Public Libraries including Nā‘ālehu and Pāhala. Starting June 1, sign-in and register at librarieshawaii.beanstack.org for free reading rewards, activities and programs for all ages and a chance to win a round trip for Four to anywhere Alaska Airlines flies. 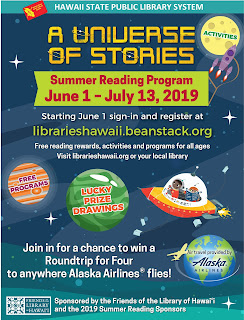 Andy McKee Plays in Volcano at Kīlauea Military Camp's Kīlauea Theater, Saturday, June 1. Show begins at 7:45 p.m. A Park entrance fee may apply if arriving before 7:30 p.m. McKee is an acoustic guitar "virtuoso, a master practitioner" of folk, blues, bluegrass, and other musical genres. Information or purchase tickets, $48, at (808) 896-4845, kilaueamilitarycamp.com, or bluesbearhawaii.com. 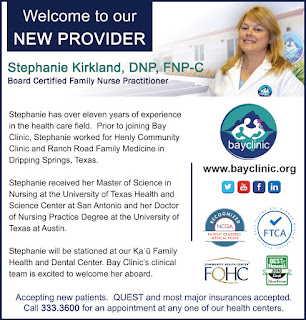 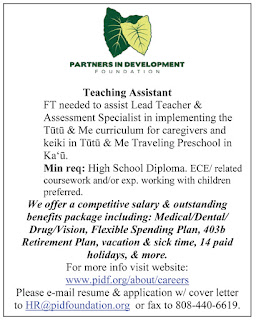 ONGOING
Summer Programs for Kaʻū High & Pāhala Elementary registrations are open.
Uplink All-Stars runs Friday, June 7 through Friday, June 28 for students in grades 6, 7, and 8.
Algebra camp is also open to students in grades 6, 7, and 8 from Monday, June 10 through Friday, June 21.
for high school students, runs from Wednesday, June 12 through Thursday, July 11.
All three programs require registration by calling 313-4100.
Seamless Summer Program, open to all people under age 18, no registration required, offers free breakfast from  to , and free lunch from 11 a.m. to 11:30 a.m., on weekdays in the school cafeteria. 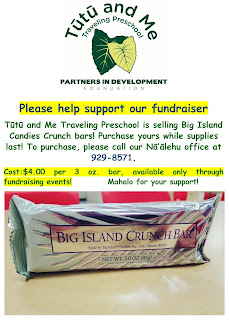 Full-Time Teaching Assistant Sought by Tūtū & Me to implement curriculum for caregivers and keiki in Tūtū & Me Traveling Preschool in Kaʻū. Competitive salary and benefits package, including medical, dental, drug, and vision; flexible spending plan; 403b retirement plan; vacation, sick days, and 14 paid days off; and more. 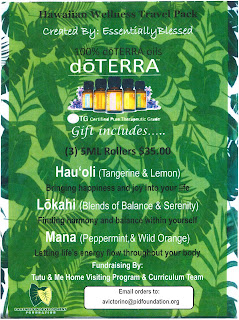 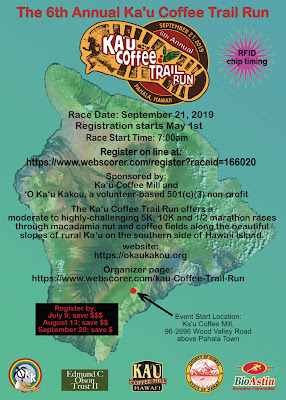 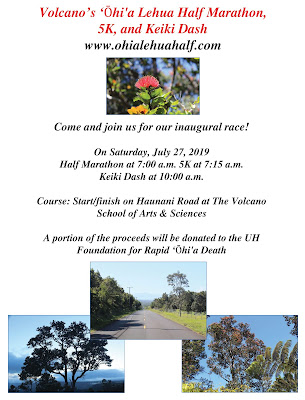 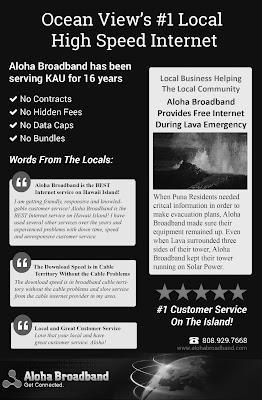 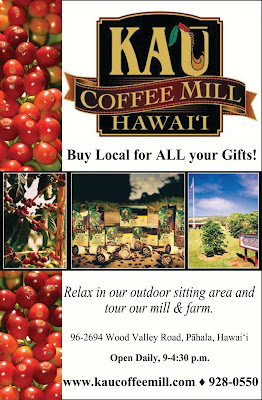