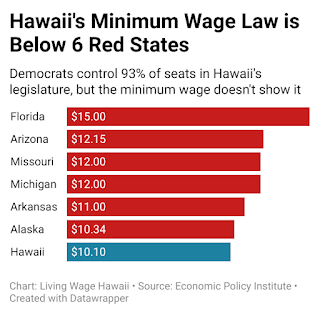 HB 2510 would also change the minimum wage for tipped employees. Currently they can be paid 75 cents an hour less than minimum wage when wages and tips add up to a minimum of $7 more than minimum wage.
New legislation that passed the state House would allow payment of $1.50 less than the minimum wage in 2023 with the margin increasing 25 cents a year  reaching $2.75 in 2028. Tipped employees would still make at least $7 more than minimum wage.
Hawai'i County Council sent testimony to the state House of Representatives supporting the hike to $18 an hour, noting that post-pandemic about 59% of households in Hawai'i are ALICD - Asset Limited, Income Constrained and Employed. Some other testimony urged that the incremental hike in minimum wages reach $18 far sooner than 2028.
To read comments, add your own, and like this story, see www.facebook.com/kaucalendar/. See latest print edition at www.kaucalendar.com.  See upcoming events at https://kaunewsbriefs.blogspot.com/2022/03/upcoming-events-for-kau-and-volcano.html
DEPARTMENT OF HAWAIIAN HOME LANDS will receive $22.3 million appropriated by Congress, according to a statement from Sen. Brian Schatz during the past week.
In addition, other federal funding for Hawaiian programs includes $22 million for the Native Hawaiian
Health Care Systems; $39 million for Native Hawaiian education programs; $21.3 million for Native Hawaiian and Alaska Native-serving institutions; $1.5 million of Native Hawaiian and Alaska Native culture and art; $1.5 million for the Center for Indigenous Innovation and Equity; $1 million for the Native Hawaiian Resource Center on Domestic Violence; and $500,000 in new national funding for the Native American Language Resource Center.
Schatz, who serves as chairman of both the Senate Committee on Indian Affairs and the Senate Appropriations Subcommittee on Housing and Urban Development, said the Department of Hawaiian Home Lands will receive $20.3 million more than allocated last year, directed to housing for Native Hawaiians. He said it is the highest level of funding for Native Hawaiian housing ever. This major increase in funding is a big win and means DHHL will have more resources to put people into homes.”
To apply for Hawaiian Home Lands housing, applicants must be at least 18 years of age; and must be a native Hawaiian, defined as “any descendant of not less than one-half part of the blood of the races inhabiting the Hawaiian Islands previous to 1778.” This means applicants must have a blood quantum of at least 50 percent Hawaiian. This requirement remains unchanged since the HHCA’s passage in 1921.
Tyler Iokepa Gomes, deputy to the chairman of the Department of Hawaiian Home Lands, issued a statement saying, “DHHL is grateful for Sen. Schatz and the Appropriations Committee’s confidence and faith in our ability to deploy these much needed federal funds. This money will enable DHHL to provide financing for home construction or repair, rental assistance, and other housing services aimed at reducing homelessness. We look forward to our increased capacity to deliver housing to Native Hawaiians and fulfill the mission of the Hawaiian Homes Commission Act of 1920.”
Too apply and see more go to https://dhhl.hawaii.gov/applications/applying-for-hawaiian-home-lands/
To read comments, add your own, and like this story, see www.facebook.com/kaucalendar/. See latest print edition at www.kaucalendar.com.  See upcoming events at https://kaunewsbriefs.blogspot.com/2022/03/upcoming-events-for-kau-and-volcano.html
KŌKUA HARVEST IS LOOKING TO PICK UP FRUIT AND PRODUCE FROM KAʻŪ that would otherwise go to waste. Kōkua Harvest is the island-wide food rescue (also known as "gleaning") program of The Food Basket.
Farms and private residences invite Kōkua Harvest onto their properties to harvest their extra produce. 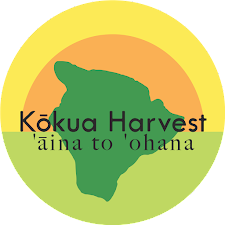 Those who participate have more produce than they can use or are unable to harvest themselves. Kōkua Harvest works to schedule a time to bring volunteers out to harvest and distribute the extra produce. Harvests last one to two hours, and Kōkua Harvest provides all tools, equipment, and volunteers. At the end of the day the harvest is split between volunteers, the property owner/farm, and our distribution partners including Kōkua Harvest's program home, The Food Basket.
Those who want to schedule a harvest, learn how to volunteer, or are interested in hearing more can visit Kōkua Harvest's  website at kokuaharvest.org, email info@kokuaharvest.org, or call Lisa at 732-616-2460.
To read comments, add your own, and like this story, see www.facebook.com/kaucalendar/. See latest print edition at www.kaucalendar.com.  See upcoming events at https://kaunewsbriefs.blogspot.com/2022/03/upcoming-events-for-kau-and-volcano.html
SEE UPCOMING EVENTS IN KAʻŪ & VOLCANO
at https://kaunewsbriefs.blogspot.com/2022/03/upcoming-events-for-kau-and-volcano.html.
Posted by The Ka`u Calendar at 8:11 PM