MANU'A ISLANDS MAGMATIC ACTIVITY is focus of this week's Volcano Watch, the weekly column by USGS Hawaiian Volcano Observatory scientists and affiliates. The focus is on possible volcanic eruptions and the ongoing earthquakes in American Samoa, with Hawaiian Volcano Observatory sending a crew there to help set up more monitoring:
Earthquakes have been felt since late July in the Manuʻa Islands of American Samoa in the South Pacific. These earthquakes are likely associated with magmatic activity beneath the islands. The USGS Hawaiian Volcano Observatory is working closely with federal partners, American Samoan officials, and local residents to better understand the source and potential hazard implications of these ongoing earthquakes.
Volcanoes in American Samoa are similar to those in Hawai'i, with the Pacific Plate moving to the northwest over the Samoa hotspot and building submarine volcanoes that eventually emerge from the ocean as islands. These islands are the tops of large basaltic shield volcanoes rising over 15,000 feet (4,500 m) from the surrounding seafloor.
The Samoan hotspot is currently centered on Vailuluʻu seamount, which has had several historic eruptions. The Manuʻa Islands of Ofu, Olosega, and Ta‘ū—along with the main island of Tutuila—are all considered potentially active as they have erupted within the last 10,000 years.
Tutuila is the most populous island in American Samoa and is where the capital city of Pago Pago is located. The youngest dated eruption in American Samoa on land is on Tutuila and occurred approximately 1400–1700 years ago. However, numerous submarine eruptions have occurred more recently at volcanoes east of Tutuila. 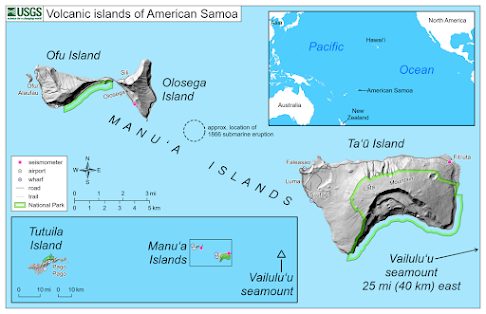 To read comments, add your own, and like this story, see www.facebook.com/kaucalendar. See latest print edition at wwwkaucalendar.com. See upcoming events at  https://kaunewsbriefs.blogspot.com/2022/04/upcoming-events-for-kau-and-volcano.html