INDIVIDUAL WASTEWATER SYSTEMS IN EACH YARD, INSTEAD OF A SEWAGE TREATMENT PLANT for Pāhala, is a new concept presented by County of Hawai'i on Wednesday for homes on the old sugar plantation sewage system. During an informational meeting at Pāhala Community Center, the county suggested paying for septic tanks and other individual wastewater systems for some 175 homes. It would save the county tens of millions of dollars over the option of building a secondary wastewater treatment plant with concrete lined aerated lagoons and sewer collection systems.
County representatives said they are looking for an affordable and timely solution to stop operating the gang cesspools left over from plantation days. They became illegal nationwide in 1999, with the changeover taking decades. The gang cesspools in Pāhala built by the C. Brewer sugar plantation, are holes in the ground receiving sewage piped from old sugar plantation houses. The county took over maintenance of the old system years after the sugar company shut down and signed an agreement with the EPA in 2017 to fix the problem. It's called an Administrative Order on Consent.
County officials said that installing IWS could speed up the process, avoid tearing up streets to put in sewer lines, avoid sewer hook up fees, and save money for the homeowners and the county. 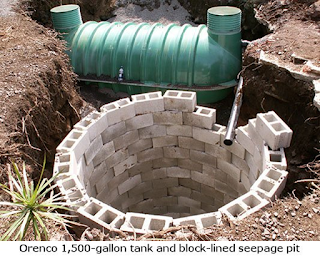 County representatives said that to install septic and other IWS, each houselot has to be studied for soil type, slope and other factor to design each system, with approval of the state Department of Health.
The smallest footprint for a septic system would likely be in the smaller yards where the septic tank or other IWS could be installed vertically along with seepage pits for the smaller homes. Some initial impact from installing individual septic in yards could occur in the larger lots, those approximately 10,000 sq. ft. or bigger where leach fields would likely be required. To make room for the leach fields, which could later be covered with grass and other vegetation, portions of the yards would be cleared, with a likelihood of removing some trees and plants, along with moving or removing of some fences, walls, sidewalks, outbuildings and sections of driveways for installation. County representatives said they would repair or replace any damaged infrastructure. 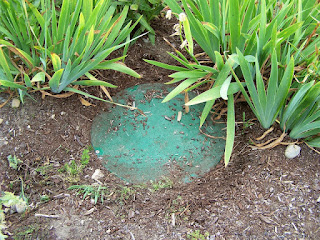 The size of leach fields would depend on the type of soil and slope of the yard. An average leach field of about 1,000 square feet for a 2,500 sq. ft. three-bedroom home, is estimated on websites of various septic system companies.
To pay for the septic and other IWS, the county could provide vouchers and homeowners could use the money to pay authorized septic installation companies. Alternatively, the county could hire the contractors directly, said county representatives.
Maintenance of septic systems could include pumping them about every five years. One idea brought up was that the homeowners could continue paying sewer fees, which they already pay to the county for maintaining the old plantation system. Once the septic is in, the fees would go towards pumping and possibly other repairs, when needed.
One kink in the new IWS plan is that the EPA has already approved a lagoon wastewater treatment system for Pāhala and is pressing the county to go forward. County representatives pointed to economic and technical challenges of constructing the approved system on land it is acquiring for the project from Kamehameha Schools. The lagoon treatment system would require cutting down a macadamia orchard and digging into land that has lava tubes and perhaps graves. They pointed to public objections to the location next to the Norfolk Pine entry to Pāhala and said the iconic trees could be disturbed under the lagoon plan. Approval of Individual Wastewater Systems would mean the land goes back to Kamehameha Schools.
To switch the plan from lagoon to IWS, the county needs concurrence from the EPA to reopen their 2017 agreement regarding replacing the gang cesspool system. County representatives said the community responded positively to the informational meeting and mentioned that representatives from the EPA are scheduled to discuss the issue with the county on April first and will follow up with an in-person meeting on April 6. They said that the septic systems, which are examples of available Individual Wastewater Systems, could become an example for other disconnected communities to follow. The state has mandated that all cesspools be converted by 2050.
Brenda Iokepa-Moses, who is Deputy Director of the county Department of Environmental Management, is a Pāhala resident and led the meeting. She noted that discussions about the solution to the sewage problem have been contentious within the community and that she hoped the Individual Wastewater System option could help bring the community together.
Also leading the meeting were the Director of Environmental Management, Ramzi Mansour, and facilitator Jessie Marques. In attendance was County Council Chair Maile David and other public officials.
The EPA's requirement for the county says the county "shall take appropriate measures to fully and properly comply with the Safe Drinking Water Act with respect to the Pāhala Community Cesspools identified including constructing a secondary wastewater treatment facility to serve the Pāhala community (“Pahala Wastewater Treatment Facility”), closing the Pāhala Community Cesspools, and replacing and expanding the wastewater collection system serving Pāhala Community. As soon as practicable, but no later than the deadlines..." The deadlines have been extended to 2023 but the requirement remains unaltered and the county is asking for a change to accommodate the Individual Wastewater System option.
To completely shut down the old gang cesspools, all of the Individual Wastewater Systems would have to be completed but there would be less flow into the gang cesspools as each IWS is completed.
To ask questions, give input and for more information, email cohdem@hawaicounty.gov.
To read comments, add your own, and like this story, see www.facebook.com/kaucalendar/. See latest print edition at www.kaucalendar.com. See upcoming events at https://kaunewsbriefs.blogspot.com/2022/03/upcoming-events-for-kau-and-volcano.html
PERMITS FOR COLLECTING FOLIAGE, FRUIT, TREES AND MORE within the Hawai'i State Forest Reserves are now available online through the state Department of Land & Natural Resources. State Forest Reserves in Ka‘ū are Kapāpala Forest Reserve and Ka‘ū Forest Reserve.
Kapāpala Forest Reserve, on the slopes of Mauna Loa, was designated on Oct. 17, 1930 through a Governorʻs Proclamation. It consists of approximately 37,276 acres and lies above Mamalahoa Highway and northwest of Kīlauea crater. Activities are birdwatching, hiking and hunting. 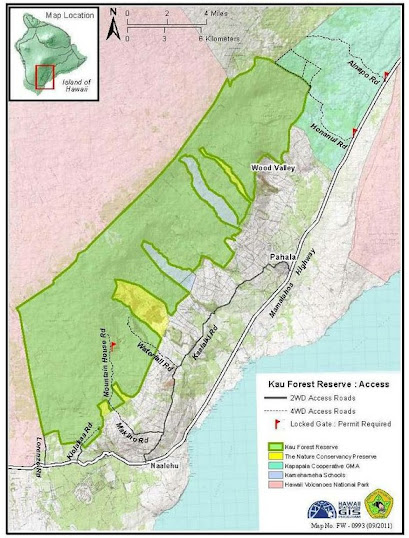 "The Ka‘ū Forest Reserve is a critical watershed for the people of Ka‘ū." says the DLNR website. "The forest reserve’s water sources are used for domestic supplies as well as agriculture, and maintaining this water supply is important for the future viability of agriculture in Ka‘ū. The native forest replenishes springs and other groundwater, and reduces flooding and erosion.
"The Ka‘ū Forest Reserve is important for preserving Hawai'i’s unique native forest ecosystems and its species, including a wide variety of rare or endangered plants and animals. Endangered birds for which the continuing health of the forest reserve may be a critical factor include the ‘Akiapōlā‘au (Hemignathus munroi), Hawai‘i Creeper (Oreomystis mana) and Hawai‘i ‘Akepa (Loxops coccineus).
"The Ka‘ū Forest Reserve contains resources that are vital for maintaining Hawaiian culture and practices. Hawaiians consider native plants and animals as family and have a strong spiritual connection to the mountain landscape and the forest itself.
"The Ka‘ū Forest Reserve is an important area for public use including hunting, recreational opportunities, cultural uses, personal gathering, and educational programs and activities. Public access is allowed in the Reserve for recreational and cultural uses, including hunting, hiking and gathering of plant material (with a permit)."
The new permitting platform, developed by DLNR's Division of Forestry & Wildlife, covers personal-use collections and commercial harvesting. While commercial harvest permits are associated with a fee, permits for collecting items in quantities that are determined by DLNR as representing personal use are provided free of charge.
People wishing to apply for permits on hardcopy can still do so at any DOFAW District office. The online permitting platform can be accessed under permit topic #5 on the (State Forest Reserve System Permits) DOFAW Permits website. http://dlnr.hawaii.gov/dofaw/permits/
SEE UPCOMING EVENTS IN KAʻŪ & VOLCANO
at https://kaunewsbriefs.blogspot.com/2022/03/upcoming-events-for-kau-and-volcano.html.
Posted by The Ka`u Calendar at 11:48 PM