UHERO'S ECONOMIC FORECAST FOR HAWAI'I shows the economy is recovering but could stumble with fallout from the Russian invasion of Ukraine, interest rate hikes, and COVID-19 surprises. Dating the forecast March 6, University of Hawai'i Economic Research Organization, under the leadership of Executive Director Carl S. Bonham, Ph.D., issued its predictions and analysis:
The COVID-19 waves since last summer caused a pullback in Hawai'i tourism and a pause in labor market recovery. With the rapid end of the Omicron wave, visitor arrivals are picking up and broader recovery is resuming. The expected transition of the virus to an endemic disease sets the stage for easing of travel restrictions and the long-awaited return of international visitors. Considerable risks remain, including COVID-19 surprises, Fed tightening, and economic fallout from the Russian invasion of Ukraine.
The Omicron wave of the COVID-19 pandemic dealt a blow to global growth. The rapid retreat of this wave and likely evolution to endemic status are good news. Still, lingering struggles with the virus, the weight of fiscal retrenchment, and ongoing supply and price pressures have moderated the outlook for 2022. Russia’s invasion of Ukraine—and the resulting international sanctions—add new uncertainty to the US and global outlook. 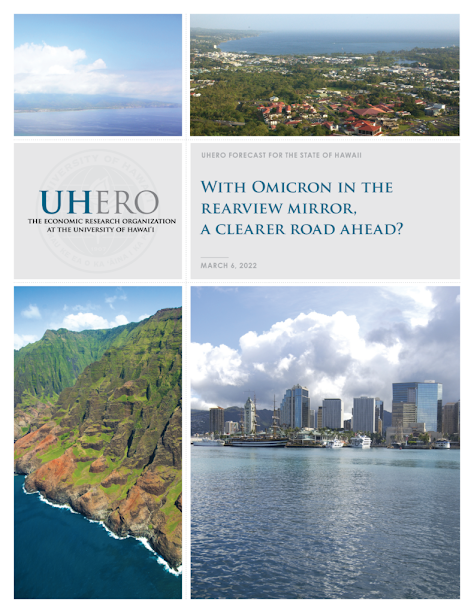 Hawai'i’s visitor industry recovery was halted by last summer’s Delta wave, and Omicron caused another setback at year end. Bookings by US visitors have now bounced back to their pre-pandemic pace, although bookings by Asian visitors remain essentially zero. While we are concerned by the recent surge of COVID-19 in some Asian countries, we expect travel restrictions to ease in coming months, permitting a significant return of international visitors.
The pandemic has had unusual effects in labor markets, including record rates of business formation and a surge in worker absences. Job recovery in Hawai'i, which had proceeded at a healthy clip, paused after the Delta wave hit. Employment gains will resume this year, although a reduced labor force and lagging tourism will delay a full recovery.
Hawai'i home prices surged 18% last year, roughly in line with the US overall. Higher prices and rising mortgage rates will further erode housing affordability in the Islands. Initiatives to address affordability are ongoing at the state and local levels.
Robust construction activity continues. Federal spending under Hawai'i’s share of a massive $8 billion Navy contract and the Infrastructure Investment and Jobs Act will support the industry in coming years. The possibility of a moratorium on new water meters because of the Red Hill water crisis is a concern for new residential development.
Our outlook for Hawai'i is relatively upbeat. The anticipated retreat of COVID-19 will clear the way for a more complete visitor industry recovery. After a weak start to the year, arrivals will surpass last summer’s peak by the second quarter and reach 90% of their pre-pandemic level by the year’s end. Visitor numbers will reach 9.5 million in 2023.
The easing of COVID-related restrictions, and of public concern about infection risk, will also support recovery. The state’s payroll base will see increasing gains as the year progresses and expand by 4.5% for the year as a whole. By 2023, job growth will have absorbed most of the slack in the labor market, driving the unemployment rate down to 3.3%.
Income growth in Hawai'i, which has been supported by extensive federal stimulus, will take a hit this year as the direct support to families ends. Real personal income will drop 4.7% this year. Gains in employment and wages will enable the beginning of income recovery as the year progresses.
The path ahead appears clearer, but there remain big risks. Despite gains, COVID-19 still has the capacity to be very disruptive. Federal Reserve interest rate hikes could cause more slowing than desired. Russia’s invasion of Ukraine could cause higher energy costs and slower global growth, which would impact Hawai'i tourism and local inflation.  See the complete report at https://uhero.hawaii.edu/wp-content/uploads/2022/02/22Q1_Forecast.pdf.

THE HAWKSBILL PROJECT is looking for volunteers to watch over the nesting sites of endangered honu'ea - hawksbill sea turtles - this year. Most of the sites for the project on this island are in Kaʻū. The periods when volunteers are needed to camp and protect the turtles and their eggs are from May to August and August to December.

Volunteers camp for six consecutive nights at remote beaches. There are day and night watches and daily search for more nesting turtles on the nearby beaches.
The volunteers will be interns with the Hawai'i Island Hawksbill Project. They will measure and tag nesting females, locate unobserved nests, ensure that hatchlings reach the ocean, conduct nest excavations, participate in non-native predator control to protect the nests, eggs and hatchlings from mongoises, feral cats and rats. The will also be responsible for accurately ach intern must be at least 18 years of age, with U.S. drivers license, and be certified in first aid and CPR. Interns must be fit enough to hike up to 12 miles per day over rugged lava terrain with a backpack 30 pounds or heavier.
"Must have a positive attitude, diligent work ethic and love the outdoors," says the call for volunteers. The project provides dorm-style housing at Hawai'i Volcanoes National Park for nights not camping and up to $20 per day for food. For more, email info@hawaiiislandhawksbillproject.org.
Megan Lamson, Hawai'i Wildlife Fund's Hawai'i Program Director, said, "The Kaʻū coastline is the home to the most important honu'ea nesting habitat in the state. Hawaiian hawksbills are critically endangered and efforts like the Hawai'i Island Hawksbill Sea Turtle Recovery Project on Hawai'i Island and other efforts on Maui by Hawai'i Wildlife Fund and on Moloka'i are some of the best opportunities to save his rare turtle species. Please support this effort and volunteer today." She also urged everyone to "always pick up fishing line along the coastline!" Fishing line can entangle and kills this critically endangered species.
See more on hawksbills and the project at https://www.facebook.com/hawaiislandhawksbillproject/ and at Hawai'i Wildlife Fund's website  at www.wildhawaii.org.
A MORAL RESPONSIBILITY AND ABILITY TO CHOOSE TO PRESERVE THE EARTH is an obligation for humankind, according to Robert Cowie of University of Hawai'i. A story by University of Hawai'i News writer Marcie Grabowski reports on a new paper issued by biologists with the University of Hawai' at Manoa and the Museum National d’Histoire Naturelle in Paris. It suggests that humankind may be witnessing a mass biodiversity extinction event on the planet. Grabowski writes:
Mass biodiversity extinction events caused by extreme natural phenomena have marked the history of life on Earth five times. Today, many experts warn that a Sixth Mass Extinction crisis is underway, this time entirely caused by human activities.
A comprehensive assessment of evidence of this ongoing extinction event was published in Biological Reviews and can be reviewed at (https://onlinelibrary.wiley.com/doi/full/10.1111/brv.1281). The paper is written by biologists from the University of Hawaiʻi at Mānoa and the Muséum National d’Histoire Naturelle in Paris, France.
“Drastically increased rates of species extinctions and declining abundances of many animal and plant populations are well documented, yet some deny that these phenomena amount to mass extinction,” said Robert Cowie, lead author of the study and research professor at the UH Mānoa Pacific Biosciences Research Center (https://www.pbrc.hawaii.edu/) in the School of Ocean and Earth Science and Technology (https://www.soest.hawaii.edu/soestwp/). “This denial is based on a highly biased assessment of the crisis which focuses on mammals and birds and ignores invertebrates, which of course constitute the great majority of biodiversity.”
By extrapolating from estimates obtained for land snails and slugs, Cowie and co-authors estimated that since the year 1500, Earth could already have lost between 7.5% and 13% of the two million known species—a staggering 150,000 to 260,000 species.
“Including invertebrates was key to confirming that we are indeed witnessing the onset of the Sixth Mass Extinction in Earth’s history,” said Cowie.
Extinction hits island species disproportionately. The situation is not the same everywhere. Although marine species face significant threats, there is no evidence that the crisis is affecting the oceans to the same extent as the land. On land, island species, such as those of the Hawaiian Islands, are much more affected than continental species. And the rate of extinction of plants seems lower than that of terrestrial animals.
Unfortunately, along with science denial taking a foothold in modern society on a range of issues, the new study points out that some people also deny that the sixth extinction has begun. Additionally, others accept it as a new and natural evolutionary trajectory, as humans are just another species playing their natural role in Earth’s history. Some even consider that biodiversity should be manipulated solely for the benefit of humanity—but benefit defined by whom? 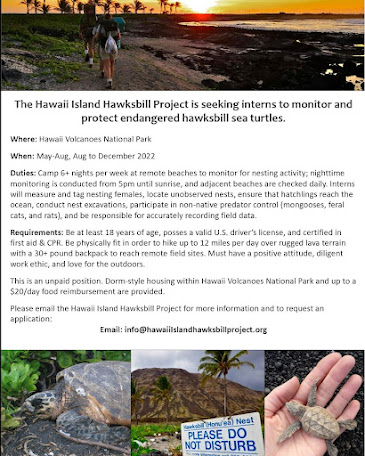 “Humans are the only species capable of manipulating the biosphere on a large scale,” Cowie emphasized. “We are not just another species evolving in the face of external influences. In contrast, we are the only species that has conscious choice regarding our future and that of Earth’s biodiversity.”
To fight the crisis, various conservation initiatives have been successful for certain charismatic animals. But these initiatives cannot target all species, and they cannot reverse the overall trend of species extinction. The authors believe it is essential to continue such efforts, to continue to cultivate a wonder for nature, and crucially to document biodiversity before it disappears.
“Despite the rhetoric about the gravity of the crisis, and although remedial solutions exist and are brought to the attention of decision-makers, it is clear that political will is lacking,” said Cowie. “Denying the crisis, accepting it without reacting, or even encouraging it constitutes an abrogation of humanity’s common responsibility and paves the way for Earth to continue on its sad trajectory towards the Sixth Mass Extinction.”
The research is an example of UH Mānoa’s goal of Excellence in Research: Advancing the Research and Creative Work Enterprise (https://manoa.hawaii.edu/wp/wp-content/uploads/2020/12/manoa-2025-strategic-plan.pdf#page=25), one of four goals identified in the U.H. 2015–25 Strategic Plan (https://manoa.hawaii.edu/wp/wp-content/uploads/2020/12/manoa-2025-strategic-plan.pd), updated in December 2020.
To read comments, add your own, and like this story, see www.facebook.com/kaucalendar/. See latest print edition at www.kaucalendar.com. See upcoming events at https://kaunewsbriefs.blogspot.com/2022/03/upcoming-events-for-kau-and-volcano.html.
SEE UPCOMING EVENTS IN KAʻŪ & VOLCANO
at https://kaunewsbriefs.blogspot.com/2022/03/upcoming-events-for-kau-and-volcano.html.
Posted by The Ka`u Calendar at 9:14 PM