OPPORTUNITY & URGENCY ARE TAGGED TO THE TROPICAL AgTECH CONFERENCE JUNE 22 AND 23 at University of Hawaiʻi at Hilo. The event is entitled, The International Conference for Innovative Solutions in Sustainable Tropical Agriculture.
Sponsors are the Ulupono Initiative, NEC, Kamehameha Schools, Meadow Gold, USDA, Department of Agriculture, U.H. Cooperative Extension and County of Hawaiʻi.
Among the speakers is Michelle Galimba who is described in the program as "a cattle rancher in Kaʻū on Hawaiʻi Island where she runs Kuahiwi Ranch with her brother, Guy. Their family ranch provides locally grown beef to supermarkets, farmer’s markets, and restaurants on Oʻahu and Hawaiʻi Island. Having grown up in agriculture in Hawaiʻi, she has seen first hand the stresses and constraints which make farming and ranching particularly challenging in Hawaiʻi. She is interested in the key role that agriculture, particularly small farms, has to play in addressing the big challenges of our time: economic inequity, political dis-enfranchisement, biodiversity loss, and climate change. Michelle has served on the State of Hawaiʻi’s Board of Agriculture as well as on the boards of numerous agricultural organizations and conservation non-profits."
See all of the conference cast of international speakers from private companies, educational institutions, government and non-profits at www.tropagtech.com/speakers. They include such people as David Slaughter, a professor of biological and agricultural engineering, and director of the Smart Farm Initiative at University of California, Davis, and Arama Kukutai, CEO of Plenty.
The conference website states that the ​"inaugural Tropical AgTech Conference brings together key global leaders in agricultural technology, to spur innovation and create solutions to the urgent food system problems in the tropics." It says it provides the opportunity to "develop creative, technology-based solutions that increase productivity and efficiency for smallholder farms in the tropics.  Innovations must be climate-smart, farmer-friendly to implement and economically viable at small scale production." 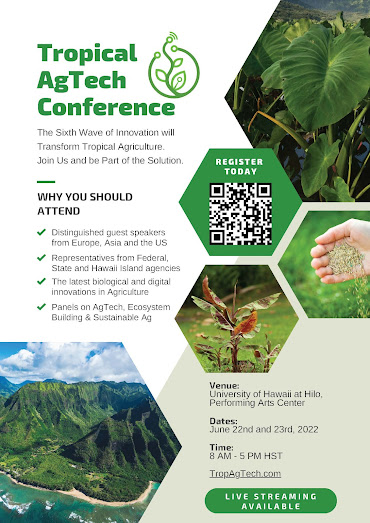 Regarding urgency, the organizers note that the "highest concentrations of hunger already exist in the tropics and climate change is making it increasingly challenging to produce food in the tropics. Currently approximately 40% of the global population live in the tropics with expectations to reach 50% by 2040.  ...Climate change is already having a negative impact on existing crops, and it is expected to get worse.
"Driven primarily by climate change, the tropics are expanding. Developing solutions that allow for agriculture production near population centers in the tropics is vital and potentially very profitable."
The organizers say they want to support tech solutions for increased productivity of small farms. Currently, "AgTech is focused on large-scale production when 80% of food consumed globally comes from small-scale farms (~5 acres)."
The conference organizers contend that "Hawaiʻi can play a critical role in providing solutions around the world. Hawaiʻi is an ideal place for incubating Tropical AgTech ideas and solutions given our climate, the research and development already taking place here, and our island’s unique resources. Hawaiʻi can be a leader for stimulating agricultural technologies in the tropics and providing solutions to increase food production to help feed the 3.7 billion people living in the tropics."
To read comments, add your own, and like this story, see www.facebook.com/kaucalendar/. See latest print edition at www.kaucalendar.com. See upcoming events at https://kaunewsbriefs.blogspot.com/2022/04/upcoming-events-for-kau-and-volcano.html.
JANEAL MCCULLOGH WHO FREQUENTS KA'Ū AND SOUTH KONA is wanted by police. Hawaiʻi Island police are asking for the public’s assistance with locating the 44-year-old in connection with several financial criminal investigations. McCullough is described as 5 feet 3 inches tall, 135 pounds, with brown 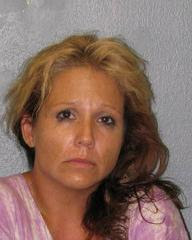 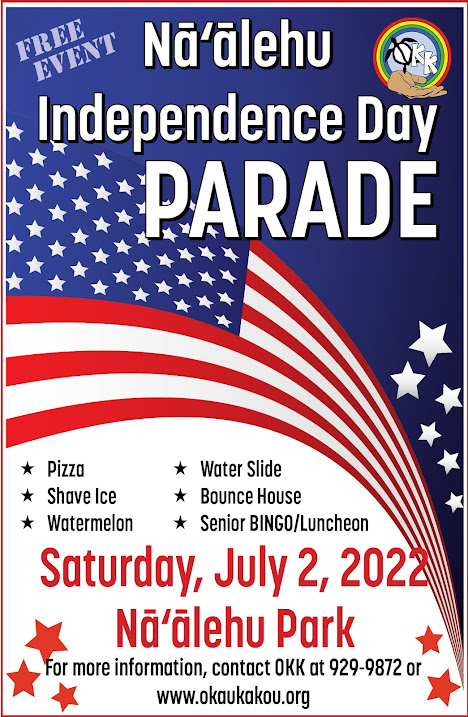 SPONSOR A BUCKLE, VOTE FOR RODEO QUEEN ahead of the Saturday, July 9 Rodeo sponsored by Kaʻū Roping & Riding Association and ʻO Kaʻū Kākou. Event to be held on the rodeo grounds behind Nāʻālehu Park. Call 808-854-7917.
BECOME A VENDOR AT THE 3RD ANNUAL EXPERIENCE VOLCANO FESTIVAL on Saturday, July 30th and Sunday, July 31st from 10 a.m. to 4 p.m. each day. Last year, over 2,500 visitors attended and over 40 events were featured during the EVH festival. All vendor spaces are $50 for both days of the festival. Sign up as a vendor or a sponsor at experiencevolcano.com. If you have questions, contact experiencevolcano@gmail.com.
SIGN UP FOR KAʻŪ COFFEE TRAIL RUNS with a change of date from July 3 to Sept. 17. Registration deadline for the annual event is Sept. 14. Organized by Hawaiʻi Island Racers, the 50K begins at 6 a.m., Half Marathon at 7 a.m., and 5K at 7:15 a.m., all starting from Kaʻū Coffee Mill at 96-2696 Wood Valley Road in Pāhala. Proceeds go to support ʻO Kaʻū Kakou. For more details on the event and registration fees, visit https://www.kaucoffeetrailruns.com/.
See The Kaʻū Calendar June Edition at www.kaucalendar.com
SEE UPCOMING EVENTS IN KAʻŪ & VOLCANO
at https://kaunewsbriefs.blogspot.com/2022/04/upcoming-events-for-kau-and-volcano.html 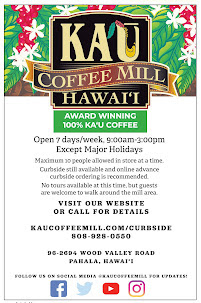 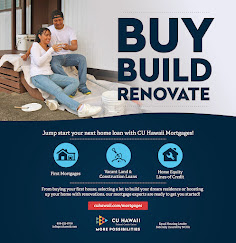