STAY AWAY FROM DISCOVERY HARBOUR was the word from county Civil Defense Thursday morning during flareups of a brushfire that burned along Wakea Avenue near Kahiki Street on Wednesday. Helping again on Thursday was equipment from BJ's Excavation as well as volunteer and county firefighters. The fire department and police are investigating the cause of the fire.
Civil Defense recommended that homeowners downwind from the fire close their windows. The fire was once again contained.
To read comments, add your own, and like this story, see www.facebook.com/kaucalendar. See latest print edition at www.kaucalendar.com. See upcoming events at https://kaunewsbriefs.blogspot.com/2022/04/upcoming-events-for-kau-and-volcano.htm
KAI KAHELE'S TEAM MISSED THE DEADLINE TO RECEIVE PUBLIC FUNDING FOR HIS CAMPAIGN FOR GOVERNOR.  As the news spread, along with a Civil Beat poll showing Josh Green in the lead, Kahele on Thursday released a statement and a photo of he and his family harvesting taro.
Kahele quoted Nelson Mandela who said the "brave man is not he who does not feel afraid, but he who conquers that fear."
Kahele said, "Yesterday, we stood in the face of what many thought would strike fear in our campaign and diminish any chance we had at success. But, we conquered that fear. You conquered that fear! In under 24 hours, we have received more contributions than we've had in the last month. That's because of you.
"We sent out a kāhea and you responded in droves. That means the world to us. To know that regardless of the obstacles that we face, you're here with us — ready for battle. To defend our Hawaiʻi, our values, and our people.
"There is no amount of money or political influence that can shake the community of people behind us, and we believe that there is an undoubtable path to victory. But, we need to keep pushing — harder than ever — every one of us.
"This journey is only for the brave, and you've proven that you are fearless.
"No data, no polls, no mistake can diminish our vision for the future of this place for all of our keiki.
"Let's show the system, the status quo, that we mean business."
To read comments, add your own, and like this story, see www.facebook.com/kaucalendar. See latest print edition at www.kaucalendar.com. See upcoming events at https://kaunewsbriefs.blogspot.com/2022/04/upcoming-events-for-kau-and-volcano.htm
LT. GOV. JOSH GREEN, who visited the Waimea Rodeo at Parker Ranch on July 4, responded to the Civil Beat poll showing his lead in the race for the Democratic nominee for governor. He posted: "I'm very grateful for the overwhelming support from across Hawaiʻi, but I don't take it for granted and I will keep working hard to earn it every day." He also put up a support flyer for "Josh Green the Doctor." 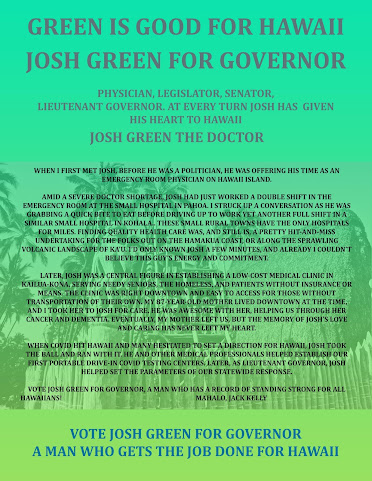 RODEO AT NĀ'ĀLEHU RETURNS SATURDAY AND SUNDAY. Kaʻū Roping & Riding Association brings back its annual Fourth of July rodeo July 9 and July 10 after going dark during covid. At the gate, tickets will be $10 each day. The rodeo starts with Slack Roping at 8 a.m. on both days, with the show beginning at noon at Nāʻālehu Rodeo Grounds.
Titles will be sought during two days of competition for All Around Cowboy and All Around Cowgirl. Events are designed for keiki to working paniolo to kupuna. They include: Open Dally, Kane-Wahine Dally, Century Team Roping, Ranch Mugging, Double Mugging, Rescue Race, Po'o Wai
U, Tie Down, Wahine Breakaway, Youth Barrels and a number of events for keiki.
The family rodeo event started with a competition throughout the Kaʻū
neighborhoods and ranches for Rodeo Queen, with both candidates Lily Api Dacalio and Zira Wroblewski invited to grace the rodeo venue both days. The winner will be announced during the rodeo.
Wroblewski, 10, will be in fifth grade at  Pāhala Elementary in the upcoming school year. She is daughter of Kamalani and Eddie Wroblewski, of Pāhala. Dacalio, 12, will attend eighth grade at Pāhala Intermediate. She is the daughter of Sierra and Kimo Dacalio, of Wood Valley.
For a last-minute sponsorship of the rodeo, call 808-854-7917.
Warming up for this weekend's rodeo was a riding group that  participated in the Volcano July 4 Parade. Called O Kaʻū Paniolo and organized by Merle Becker of Aikane Plantation Coffee, 16 riders participated. Ikaika Derasin carried the banner and escorted Becker. Joining them were: Lorilee
Lorenzo, Ikaika Grace-Salmo, Caya Wong, Elaine Togami, Chris Beck, Frank Lorenzo, Mahina Lorenzo, Kirk Derasin, Denicia Derasin, Kircia Derasin, Romero Santiago and Joy Santiago.
Pooper Scoopers and buggy riders were Phil Becker, Colton Wong, Tiana Wong, Chaseton Wong, Chayden Caitano, Ethan Biasson and AJ Libunao.
To read comments, add your own, and like this story, see www.facebook.com/kaucalendar. See latest print edition at www.kaucalendar.com. See upcoming events at https://kaunewsbriefs.blogspot.com/2022/04/upcoming-events-for-kau-and-volcano.htm

A FIRE RAN THROUGH UNINHABITED LAND on Wednesday afternoon, northeast of the Discovery Harbour Community Center, along Wakea Avenue. It was headed towards Kama'oa Road. Firefighters responded with fire and water trucks and were able to access water from a fire hydrant in Discovery Harbour. Assisting was BJ Excavations.

After containing the fire to protect homes and letting some of the fire burn through dry grass to further protect the area, the firefighters stationed a fire truck over night at Discovery Harbour to be prepared for any flareups.
Rumors spread like wildfire through Discovery Harbour that the fire was set intentionally, perhaps by someone who painted graffiti on the clubhouse a few months ago.
PLAN FOR  EXPERIENCE VOLCANO HAWAIʻI FESTIVAL on Saturday, July 30th and Sunday, July 31st from 10 a.m. to 4 p.m. each day in Volcano Village. Last year, over 2,500 visitors attended and over 40 events were featured during the EVH festival.
SIGN UP FOR KAʻŪ COFFEE TRAIL RUNS with a change of date from July 3 to Sept. 17. Registration deadline for the annual event is Sept. 14. Organized by Hawaiʻi Island Racers, the 50K begins at 6 a.m., Half Marathon at 7 a.m., and 5K at 7:15 a.m., all starting from Kaʻū Coffee Mill at 96-2696 Wood Valley Road in Pāhala. Proceeds go to support ʻO Kaʻū Kākou. For more details on the event and registration fees, visit https://www.kaucoffeetrailruns.com/.
To read comments, add your own, and like this story, see www.facebook.com/kaucalendar. See latest print edition at www.kaucalendar.com. See upcoming events at https://kaunewsbriefs.blogspot.com/2022/04/upcoming-events-for-kau-and-volcano.htm
Posted by The Ka`u Calendar at 2:34 AM