CLEAN AIR, BLUE SKIES AT THE SUMMIT of Kīlauea Volcano welcomed the public back to parts of Hawaiʻi Volcanoes National Park on Saturday that were closed for 134 days. For months, Halemaʻumaʻu crater and Kīlauea experienced tens of thousands of earthquakes and the collapse of their floors and walls. The famous lava lake drained and the result is some of the cleanest air since Jan. 3, 1982, when a long eruptive phase began and vog became a common condition between the volcano and Kona.
During an early morning press conference on Saturday, Jessica Ferracane, Hawaiʻi Volcanoes Public Affairs Specialist, said that members of Hawaiʻi Volcanoes staff are very excited to once again host the public. In order to prevent a traffic jam, they opened the main park gate at 7 a.m, ahead of the 10 a.m. announced time. They raised the flag at 8:55 a.m. As visitors walked from Volcano House along the trail to Steam Vents, they saw a vastly changed landscape with many shades of earth in the crater.
As the crowds came in, Ferracane noted that the nene, Hawaiʻi's state bird, has become accustomed to a quiet park without people. She also noted that the birds, including those that soar in the crater, remained through the eruption.
She pointed to new maps, showing the crater changes and open sections of the park, and information distributed through social media, the park website, and handouts. Still closed close to the summit are Thurston Lava Tube, Jaggar Museum, and Kīlauea Iki Trail. Kīlauea Visitor Center and Volcano Art Center Gallery are open regular hours. Kīlauea Military Camp has reopened most of its facilities and Volcano House is opening in phases.
Phase Two of reopening Hawaiʻi Volcanoes will be back country trails.

Ferracane explained that the Park closed on May 11 after unprecedented volcanic activity threatened public safety and damaged park roads, waterlines, buildings, and trails.

This morning, however, park rangers turned off the Park Closed sign on Highway 11 and replaced it with a new message: Welcome Back/Park Open. Although an official count wasn't immediately available, an estimated several thousand people enjoyed the park today, according to a statement from Hawaiʻi Volcanoes this evening.
The statement noted that "Visitors were pleasantly surprised that drinking water had been restored in time for the reopening, thanks to members of the park's Facilities Maintenance team who have worked diligently to repair pipes and the water system. In addition, Clyde the mule and ‘Ōhi‘a, a part quarter horse, greeted visitors.
Hawaiʻi Volcanoes Superintendent Cindy Orlando said, "It was a picture-perfect day and our hearts are filled with joy to see our visitors and community return to their park. We thank everyone for their patience, support, and understanding during the last 134 days." Orlando assisted visitors near the Hōlei Sea Arch while other staff roved the park and interacted with visitors "who were ecstatic the park is open."
Hawai‘i Volcanoes National Park resumed its normal 24-hour a day operation. Saturday was National Public Lands Day, a fee-free day, and entrance fees will go into effect Sunday. Parts of the park remain closed until further damage assessments and repairs can be made.
For more information, a map of what is open in Hawaiʻi Volcanoes National Park, and to learn about the new hazards - including sink holes and earth cracks created by tens of thousands of earthquakes that preceded the opening - visit the park website: nps.gov/havo/closed_areas.htm.

THE FIFTH ANNUAL KAʻŪ COFFEE TRAIL RUN brought good conditions to competitors from around the world. More than 200 racers took to the route through Kaʻū Coffee and macadamia orchards and up the mountain above Wood Valley Road.
Runners of all ages from five years old to over 70 competed. The races were 5 K, 10 K, and a Half Marathon. Takami Munnerlyn was the youngest competitor and has raced in the Kaʻū Coffee Trail Run since he was three, insisting this year that he run without an accompanying relative.
Kaʻū Coffee Trail Run raises money for the good works of the community group ʻO Kaʻū Kakou. It was co-sponsored by BioAstin and Kaʻū Coffee Mill.
See more photos and all of the results in upcoming Kaʻū News Briefs.

MAUNA LOA MACADAMIA NUT VISITOR CENTER is closed after the finding of E. coli in samples from its water supply. The state Department of Health sent a notice concerning possible water violations, and the facility will remain closed until the all clear is given by the state. The message on the Mauna Loa voice mail states, "Due to issues with our drinking water distribution system we will be closed until further notice as we investigate and resolve the cause of the issues... Mahalo for your continued support."
A statement from the company reports: "The problem was discovered on September 21, 2018. Since that time, the water may not have adequate disinfection and may pose a risk for customers." Possible reasons given for presence of E. coli included a malfunctioning water disinfection system, the company reported. Mauna Loa also reported that none of its products were affected by contaminated water and there are no recalls.
"Due to multiple safeguards in place to ensure quality, Mauna Loa confirms that all products currently available in stores or previously purchased are safe for consumption. Mauna Loa Nut Corporation is committed to the highest industry standards and is working diligently to determine the cause of the potential water contamination."
State Department of Health recommended that Mauna Loa Macadamia Nut Water System consumers and employees refrain from drinking from the water system.

DR. CHRISTINE BLASEY FORD WILL TESTIFY in front of the U.S. Senate Judiciary Committee on Thursday, reports the New York Times. The Times calls the agreement "tentative," subject to specifics to be worked out by the Committee Chair, Sen. Charles Grassley, and Ford's lawyers. Ford accuses Judge Brett Kavanaugh, nominee for the open seat on the U.S. Supreme Court, of sexually and physically assaulting her. She claims Kavanaugh jumped on top of her after pushing her down on a bed, groped her, held his hand over her mouth, and tried to remove her clothing. They were both in their teens at a party where Kavanaugh and friends were inebriated, Ford reports. Kavanaugh denies it.

Kaʻū's U.S. Senator, Mazie Hirono, serves on the Judiciary Committee and is expected to question both witnesses.

NEW and UPCOMING
PASTEL ON-SITE LANDSCAPE PAINTING WITH PATTI PEASE JOHNSON is offered at Volcano Art Center's Ni‘aulani Campus in Volcano Village on Saturday, Oct. 13, from 9 a.m. to 12:30 p.m. The workshop offers step-by-step instruction in a proven rotational method for success, starting with form and fill, moving to value of black and white, then color. All materials are supplied. Students finish the class by completing one 9"×12" project.
"Your own natural style is brought to the surface... Grow your knowledge of composition, color and correcting problems," states the event description on volcanoartcenter.org.
Initial discussion includes pastels - types, papers, fixing and mounting. Then, students use newsprint to get the flow of arm movements to keep loose. Students then form shapes, and move into colors on sanded pastel paper, learning to exaggerate and be bold with colors, and the value of using the lightest lights and the darkest darks.
Weather permitting, the workshop will take place outdoors at Ni‘aulani. Otherwise, the workshop will be held indoors with a reference photo.
Cost for the workshop is $45 per Volcano Art Center member, or $50 per non-member, plus a $10 supply fee per person. Beginner and intermediate artists are welcome. Register at volcanoartcenter.org.
Johnson's artwork can be found at galleries and shops across the State and in collections around the world. Register at volcanoartcenter.org or call 967-8222. 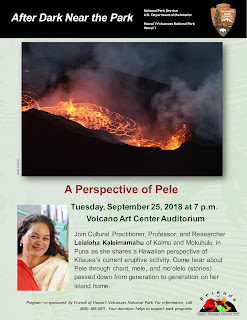 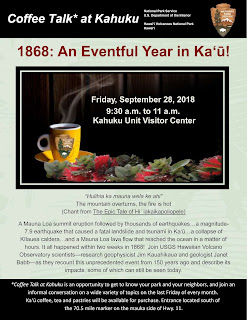 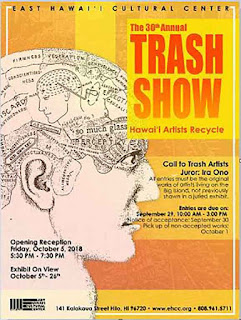 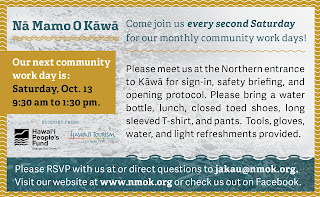 Paths and Trails, Sat., Sept. 29, , Kahuku Unit of Hawaiʻi . Moderately-difficult, 2-mile, hike with some of the most spectacular overlooks in Kahuku. Discover the ways people, animals, and plants got to Kahuku and the paths they follow. Free. nps.gov/HAVO 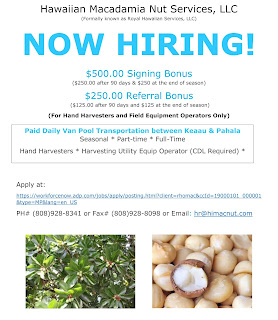 Free Beaded Wind Chime Arts and Crafts Activity at Pāhala Comunity Center Wednesday, Sept. 26, from 3:30 p.m. to 5 p.m., for keiki in Kindergarten through 8th grade. Register through Sept. 25. For more, call 928-3102 or visit the community center during business hours: Monday-Thursday and Saturday, from noon to 8 p.m., or Friday, from 7:45 a.m. to 4:30 p.m. See hawaiicounty.gov/pr-recreation.

Volunteers Needed by St. Jude's Episcopal Church for community outreach, especially soup cooks and shower organizers, towel laundry, alter guild, and for the computer lab. Volunteers do not have to be members of the church. "Volunteering for St. Jude's Saturday Shower and Soup ministry is an opportunity to serve God in a powerful way," states St. Jude's. Contact Dave Breskin, 319-8333. 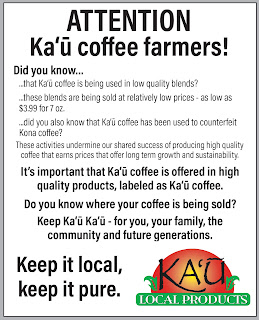 Tūtū and Me Traveling Preschool’s Temporary Nāʻālehu Location is Kauahaʻao Church in Waiʻōhinu. Meeting days and times remain the same: Mondays and Wednesdays, from 8:45 to 10:45 a.m. Pāhala site program meets Tuesdays and Thursdays, from 8:30 to 10:30 a.m., at Pāhala Community Center.
Tūtū and Me also offers home visits to those with keiki zero to five years old, to aid with parenting tips and strategies, educational resources, and a compassionate listening ear. Free. Visits last 1.5 hours, two to four times a month, total of 12 visits. Snacks are provided.
To enroll in either program, fill out enrollment forms found at pidf.org/programs/tutu_and_me/enrollment_forms, or call Linda Bong at 464-9634. Questions: Clark at 929-8571 or eclark@pidfountation.org. 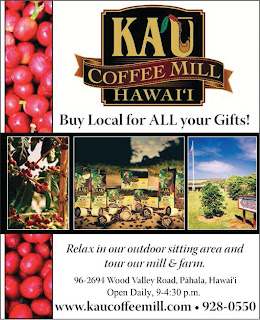 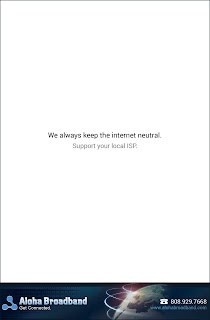 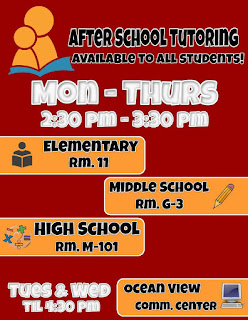 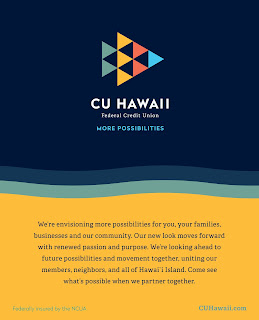