The five-year American Community Survey estimates are based off a sample size of residents in each town, and have an error margin that's largely due to small population sizes. The 2020 census is meant to document exact numbers. Both sets of data are important, as the population of an area influences how funding from the federal and state governments are allocated, how the area is represented at state and federal legislatures, and how much aid the area receives for community development and business planning. These estimates are also important because they're the only detailed estimates for areas with populations under 20,000 people.
Hawaiʻi Island leads the state in population growth, with an overall estimated increase of 5.52 percent, or 10,614 people, from 187,044 in 2014 to 197,658 in 2018. Laupahoehoe lost an estimated 23 percent, 159 people, in the same time period. Of the 42 towns on the island, 15 lost population, with six losing over ten percent. Kurtistown is estimated to have the largest increase, 457 more people, from 862 to 1,319, a 37.73 percent increase, in the same time period.

The Hawaiʻi Tribune-Herald reported that Mayor Harry Kim understands the population loss in the northern portions of the island; that the macadamia nut industry was supposed to take over after the sugar plantations closed at the turn of the century, but that didn't happen. Kim said the is "a beautiful place to live but a very difficult place to make a living, because no matter where you live, you have to find a place to work." He also said that the comparatively short commute from Kurtistown to has sparked that growth.
HOVE, said Kim, is a longer commute from Kona – 47 miles – but with the increase in housing prices, he also said he "knows at least one family that moved there because of the cost of living in Kailua-Kona," reported the Tribune.
Between 2014 and 2018, 's population grew an estimated 5.52 percent, Kauaʻi 5.16 percent, and Oʻahu 2.38 percent, reported the Tribune.
Kim, reported the Tribune, is unsurprised by the numbers. He told the paper that Hawaiʻi Island is attracting more people because the median price of a home on the is less than $400,000, about half the price of homes on the other islands. "The census means more than numbers to me," Kim told the Tribune. "It's a very good picture of who we are and what our needs are."

A GENERAL ELECTION UNITY PROGRAM, sponsored by the Democratic National Committee, was announced this week by the Hawaiʻi Democratic Party.
The initiative is meant "to ensure Democrats enter the general election unified behind our eventual nominee and ready to defeat Trump in 2020," according to an announcement. Presidential candidate campaigns have been briefed on this effort, according to DNC.
Democratic National Committee Chair Tom Perez said, "Leading up to the general election, we'll need every Democrat working together in order to defeat Donald Trump. That's why the DNC is proud to partner with our presidential candidates and Democratic state parties in this effort so that our eventual nominee has the full support of the entire party behind them. By coming together, we will put our eventual nominee in the strongest possible position to win the White House and help Democrats secure victories at every level of the ballot in 2020."
The program includes six key components:
The Democratic Unity Fund is dedicated to raising the resources and immediately investing in the infrastructure needed to elect the Democratic party's eventual presidential nominee.
Presidential Campaign Unity Ambassadors will be a senior member of each campaign who will remain the point of contact between their candidate's campaign and supporters and the nominee's campaign, "helping ensure a strong transition between the primary and general election" and "help unify Democrats from all parts of the party behind the eventual nominee."
Commitment from Candidates to Campaign for the Eventual Nominee. DNC will ask all candidates to support the Democratic nominee and "to serve as surrogates, particularly in the weeks following the Democratic National Convention, helping to flood the battleground states or take other actions as appropriate on behalf of the eventual nominee."
Developing State Party Unity Strategies for incorporating inclusivity at party-run events; encouraging state party chairs and vice chairs to remain neutral until after their state's contest if they have not already endorsed a candidate (or to disclose their support for a campaign if they do endorse); and offering best practices transition the party to a general election infrastructure.
Resume Bank of Democratic Staff on Campaigns and Continued Trainings. The DNC will work with campaigns to maintain a resume bank of talent coming off primary presidential campaigns so that the nominee's campaign can utilize this trained workforce, including organizers. Throughout the primary, the DNC will continue training all levels of potential campaign staff to ensure the eventual nominee has a strong pool of talented staff.
Coordinated Social Media Unity Campaign. On Sunday, Nov. 3 the Democratic presidential campaigns and other Democratic organizations participated in a coordinated social media push across multiple platforms "highlighting the field's commitment to unity and to support the eventual nominee in the general election," using the hashtag #OneYearOneTeam.

AWARD-WINNING FURNITURE MAKER MATS FOGELVIK, of Ocean View, will display a new work at the prestigious, invitation-only The Woodworker's Journey: Concept to Creation show on from Tuesday, Jan. 7 to Sunday, Feb. 23, 10 a.m. to 5 p.m., at the Schaefer International Gallery. The artists' reception is held Sunday, Jan. 5.
The show features 25 artists from Hawaiʻi and the mainland "with distinguished careers in Woodworking. The combination of their ideas, materials, and know-how exemplifies functional and conceptual innovation," states an announcement of the event.
Fogelvik designed and hand crafted the table he will display at the exhibit – Vortex Series #4 – using koa, wenge, ebony, rosewood, and pheasant woods. The mirror-like high gloss finish is a trademark look of Fogelvik's work. He told The Kaʻū Calendar that this is achieved by extra buffing, which enhances the natural wood grain and protects the furniture. The table will be offered for $18,000 at the show.
Fogelvik was born in and lived on before moving to Ocean View. He has been building high-end custom furniture for more than 20 years. He has won many awards at the annual Hawaiʻi Wood Show in for his work, including Best of Show in 2016 and People's Choice Award this year, for the piece he will exhibit on . Fogelvik is also a mainstay artist of the annual week-long retreat that creates pieces for auction in Holualoa each fall.
Learn more about the artists and his work at fogelvik.com.

HAWAIʻI COUNTY FIRE CHIEF DARREN ROSARIO issued a statement to remind the public of rules regarding fireworks:
It is illegal for anyone to remove the powder or pyrotechnic contents from any firework, or to throw fireworks from, at, or into any vehicle. Fireworks must only be set off between  on Tuesday, Dec. 31, and  on Wednesday, Jan. 1. Permits shall be visibly displayed at the site of use, during the time of the firing.
It is also illegal to set off any fireworks within 1,000 feet of any hospital, convalescent home, care home for the elderly, zoo, animal hospital or shelter, or church while services are held: set off any fireworks on any school property without authorization from said school official(s); set off any fireworks on any public way, such as a highway, alley, street, sidewalk, or park.
Offering for sale, selling, or giving any fireworks to minors is illegal, as is possession, purchase, selling, setting off, igniting, or otherwise causing to explode any fireworks, except under the immediate supervision of an adult. Setting off any aerial luminary devices – commonly called Sky Lanterns or Hawaiʻi Lanterns – or any other aerial devices – such as bottle rockets, skyrockets, roman candles, cakes, mortars, or shells – is also illegal. 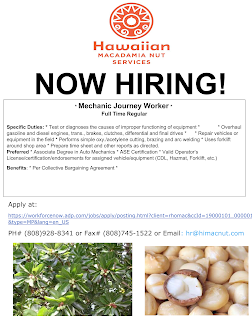 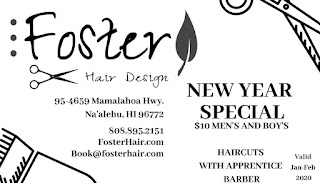 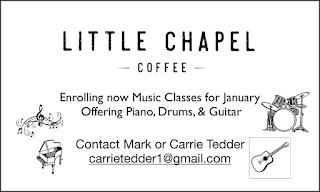 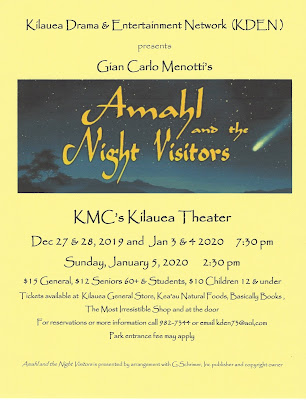 
Vote for the Best Cottage Decorations at  Military Camp through Tuesday, Jan. 1. The public is invited to stroll along the sidewalks around the KMC Cottages where the staff has entered a contest for best Christmas decorations. The outdoor displays are best seen at night. KMC is located within Hawaiʻi Volcanoes National Park. 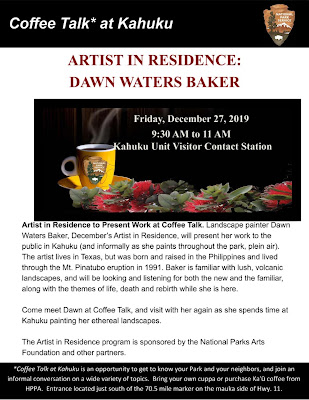 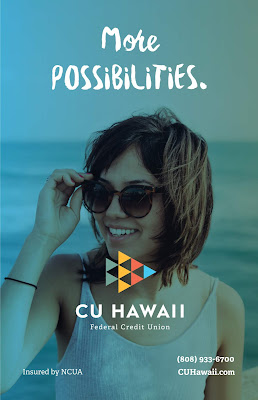 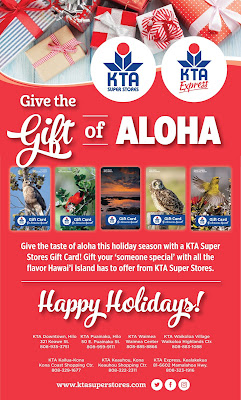