THE SUPREME COURT'S DECISION ON THURSDAY TO LIMIT THE ENVIRONMENTAL PROTECTION AGENCY IN ADDRESSING CLIMATE CHANGE has drawn concern from Hawaiʻi Gov. David Ige and Board of Land & Natural Resources Chair Suzanne Case. Case is also Hawai‘i Climate Adaptation and Mitigation Commission co-chair. She said:
“It’s unfortunate that this ruling limits the federal government's ability to act strongly on climate change. We have a moral imperative to address climate change due to impacts we already see to natural resources. Sea level rise is eroding our beaches and shorelines. Coral bleaching is damaging our reefs. Warmer temperatures are forcing disease-carrying mosquitoes into higher elevations where the avian malaria they infect native birds with, is on the verge of causing the extinction of two honeycreeper species in as little as two years. Right now, we are experiencing the impacts of drought statewide, and this has already caused more frequent and more intense wildfires.
“As Gov. Ige said, Hawai‘i has shown great progress and leadership in addressing both the causes and impacts of climate change and we will continue to work with other leaders at all levels of government who remain committed to addressing what is the greatest existential threat facing the planet.” 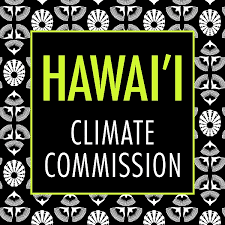 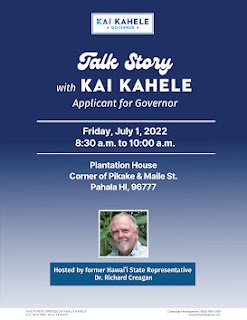 July 22 between 10 a.m. to 12 p.m. for sling loads of fence material and gear to the Koa Unit of ʻŌlaʻa, between 3,500- and 4,000-ft. elevation.
In addition, USGS will start a schedule of low-level helicopter flights in early July that will cover Kīlauea volcano over a three-week period. (Visit the USGS Hawaiian Volcano Observatory website for more information). The USGS may conduct additional flight operations over Kīlauea and Mauna Loa to assess volcanic activity and maintain instrumentation.
The statement from the Park says it "regrets any noise impact to residents and park visitors. Dates and times are subject to change based on aircraft availability and weather. Management of the park requires the use of aircraft to monitor and research volcanic activity, conduct search-and-rescue missions and law enforcement operations, support management of natural and cultural resources, and to maintain back-country facilities."
To read comments, add your own, and like this story, see www.facebook.com/kaucalendar. See latest print edition at www.kaucalendar.com. See upcoming events at https://kaunewsbriefs.blogspot.com/2022/04/upcoming-events-for-kau-and-volcano.htm 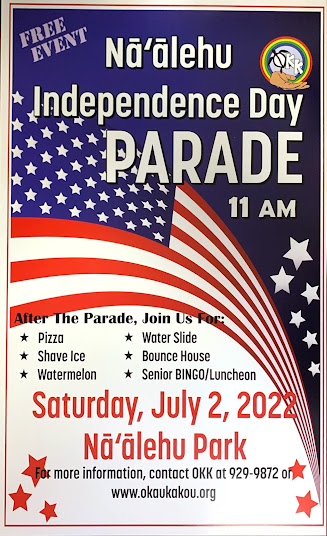 VOLCANO VILLAGE FOURTH OF JULY PARADE welcomes walking and riding groups and individuals. It is sponsored by Volcano Community Association in Volcano Village from 8:30 a.m. to 1 p.m.. The Monday, July 4 parade starts at the Post Office at 9 a.m. and ends at Cooper Center on Wright Rd., followed by Cooper Center's Independence Day celebration packed with live entertainment, craft and food vendors, keiki games and a large silent auction from 9 a.m. to 11:30 a.m. Parking maps can be found at
www.thecoopercenter.org. (No parking at
Cooper Center except handicap permitted
vehicles with prior reservation.)
SPONSOR A BUCKLE, VOTE FOR RODEO QUEEN ahead of the Saturday, July 9 Rodeo organized by Kaʻū Roping & Riding Association and ʻO Kaʻū Kākou. Event to be held on the rodeo grounds behind Nāʻālehu Park. Call 808-854-7917.

BECOME A SPONSOR AT THE 3RD ANNUAL EXPERIENCE VOLCANO FESTIVAL on Saturday, July 30th and Sunday, July 31st from 10 a.m. to 4 p.m. each day. Last year, over 2,500 visitors attended and over 40 events were featured during the EVH festival. Sign up as a sponsor at experiencevolcano.com.
If you have questions, contact experiencevolcano@gmail.com. All vendor locations are taken.
SIGN UP FOR KAʻŪ COFFEE TRAIL RUNS with a change of date from July 3 to Sept. 17. Registration deadline for the annual event is Sept. 14. Organized by Hawaiʻi Island Racers, the 50K begins at 6 a.m., Half Marathon at 7 a.m., and 5K at 7:15 a.m., all starting from Kaʻū Coffee Mill at 96-2696 Wood Valley Road in Pāhala. Proceeds go to support ʻO Kaʻū Kākou. For more details on the event and registration fees, visit https://www.kaucoffeetrailruns.com/.
SEE EVENTS IN KAʻŪ & VOLCANO at https://kaunewsbriefs.blogspot.com/2022/04/upcoming-events-for-kau-and-volcano.html

LEARN MORE ABOUT SPONSORS OF THE KAʻŪ CALENDAR
at http://kaunewsbriefs.blogspot.com/2022/05/sponsors-of-kau-calendar.htm