TIMELY INTERISLAND AND COASTAL TRAVEL VIA SEAGLIDER is planned by Mokulele Airlines, Hawaiian Electric's Pacific Current company, and REGENT, the manufacturer of an all-electric futuristic "flying boat." The new mode of transportation is described as half the cost of aircraft and traveling six time faster than ferries. The technology combines boating, gliding and low-altitude flying and could see its first launch in Hawai'i as early as 2025. A map of proposed flights shows arrival docks in Kona and Hilo.
According to REGENT, the manufacturer "is pioneering the future of sustainable maritime mobility." It describes seaglider as "a new category of electric vehicle that operates exclusively over the water that will drastically reduce the time and cost of moving people and goods between coastal cities. Seagliders will service routes up to 180 miles with existing battery technology and up to 500 miles with next-generation batteries, via existing dock infrastructure."
The seaglider manufacturer's name REGENT stands for Regional Electric Ground Effect Nautical Transport. It recently received design certification from Bureau Veritas Marine & Offshore, a Paris-based 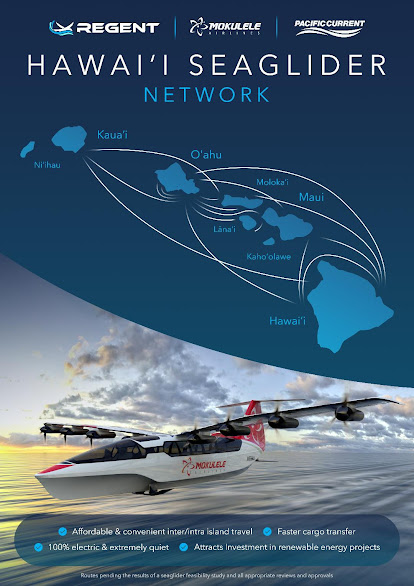 global classification society that provides third-party technical assessments and approvals. The certified model is a 12-passenger, fully electric, seaglider called the Viceroy. According to REGENT, future seagliders could carry up to 50 passengers.
Billy Thalheimer, co-founder and CEO of REGENT, said certification has been the culmination of nearly a year-long process of discussions between REGENT and Bureau Veritas. “This certification milestone is an extremely important moment for the seagliders’ design and technical maturity and is a significant step forward to enabling seaglider operations in locations throughout the world, possibly starting in Hawai‘i. It is the first major outcome of our maritime certification process.”
Thalheimer said, “REGENT and Bureau Veritas engineers have reviewed every detail of the seagliders, covering the vehicle’s structure, mechanical systems, avionics, propulsion, and safety systems."
The certification milestone from Bureau Veritas — called an Approval in Principle (AiP) —establishes seaglider’s classification as a wing-in-ground effect (WIG) maritime vessel and clears the path to begin commercial seaglider operations. WIG refers to airflow created by the vehicle’s wings and surface of the ocean that allows seagliders to travel smoothly above the water.
The next step toward commercial production is design appraisal, with technical studies underway, said the statement from REGENT. The company also seeks a Design Basis Agreement with the U.S. Coast Guard, which it expects this fall. The AiP and DBA form a classification and certification basis with both Bureau Veritas and the U.S. Coast Guard, similar to the G-1 and G-2 issue paper used in FAA aircraft certification. REGENT announced that it has booked $7 billion in provisional orders for seagliders from ferry and aviation operators, worldwide, including Mokulele Airlines, which plans to launch the local network with Viceroy seagliders.
For more, visit regentcraft.com or follow REGENT on LinkedIn, Twitter, and Instagram.
Bureau Veritas, based in Paris, is a world leader in laboratory testing, inspection and certification services. Created in 1828, it has more than 82,000 employees in more than 1,500 offices and laboratories around the globe. The REGENT statement said Bureau Veritas helps clients improve performance by offering services and innovative solutions "in order to ensure that their assets, products, infrastructure and processes meet standards and regulations in terms of quality, health and safety, environmental protection and social responsibility."
Bureau Veritas is listed on Euronext Paris and belongs to the Next 20 index. Compartment A, ISIN code FR 0006174348, stock symbol: BVI. For more, visit bureauveritas.com.
To read comments, add your own, and like this story, see www.facebook.com/kaucalendar. See latest print edition at wwwkaucalendar.com. See upcoming events at https://kaunewsbriefs.blogspot.com/2022/04/upcoming-events-for-kau-and-volcano.html.
LABOR DAY DREW COMMENTS FROM ELECTED OFFICIALS WHO REPRESENT KA'Ū and beyond. U.S. Sen. Mazie Hirono said, “On Labor Day, we honor working people in Hawai'i and across the country who keep our communities and our economy running. Workers have helped keep us healthy, fed and safe over the past two and a half years, and as we continue to rebuild from COVID-19, they are central to our economic recovery.
"Working people play an essential role in our society, and far too many are still treated without the 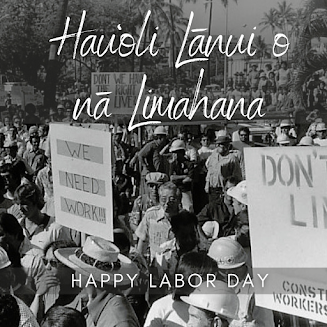 dignity and respect they deserve. That’s why I will continue to fight for safe working conditions, livable wages, fair contracts and more. It’s also why I’m working to pass legislation to protect and strengthen workers’ fundamental right to organize, bills like the PRO Act and my effort to organize public sector workers. All people deserve to be able to work and live in dignity, and I’ll never stop fighting to help ensure they can.”
Hirono's Protecting the Right to Organize Act of 2021 would expand labor protections related to employees’ rights to organize and collectively bargain in the workplace. In 2019, Hirono introduced legislation to strengthen rights for public employees to organize, act concertedly, and bargain collectively "in states that do not afford these basic protections," said a statement from her office.
U.S. SEN. BRIAN SCHATZ reported that he attended union picnics on Saturday to celebrate Labor Day.
"It was great to meet with local union leaders yesterday at Hawaiʻi’s Labor Unity Picnic. I’m so grateful for the work they do, and I’ll always stand shoulder to shoulder with unions."

KA'Ū'S REPRESENTATIVE IN CONGRESS, KAI KAHELE, said, "Mahalo nui loa to all the hardworking individuals here in Hawaiʻi and across the U.S.! We recognize your tireless efforts and celebrate all you do to lift our families and communities everyday. Wishing everyone a safe and healthy #LaborDay."
GOV. DAVID IGE SAID, "Hawai‘i was built by working families. This labor day I'm grateful for the many hardworking individuals of Hawai‘i, today and every day we thank you for everything you do for our state.

To read comments, add your own, and like this story, see www.facebook.com/kaucalendar. See latest print edition at wwwkaucalendar.com. See upcoming events at https://kaunewsbriefs.blogspot.com/2022/04/upcoming-events-for-kau-and-volcano.html.
FORMER HAWAI'I STATE SENATE LEADER AND FOUNDER OF HAWAI'I ALLIANCE FOR PROGRESSIVE ACTION, Gary Hooser, has released commentary regarding the upcoming Hawai'i Legislature, saying "It's time to pivot to policy."
Hooser noted that "Mail-in voting for the general election begins around October 20th, with votes counted on November 8th. The 2023 legislative session opens on January 18th. Subtract out major holidays - and you can see there are not a whole lot of days left to prepare for the session."    He wrote that "issues and proposals around ethics, lobbying, and campaign finance reform will hopefully be at the top of the 2023 legislative agenda. I'm cautiously optimistic that the recommendations due on December 2 from the Commission to Improve Standards of Conduct (CISC) will include the strong specific legislative proposals needed to help clean up our government, disempower the lobbying class, and level the playing field for candidates."
Hooser noted, "The Commission was initiated and established by the State House of Representatives in response to a federal investigation that's put two legislators in prison for accepting bribes. Its purpose is to review and assess existing state laws and rules and provide recommendations to further the goals of the Code of Ethics, lobbying laws, campaign finance laws, and other applicable laws..."
Hooser said he attended via Zoom a few of the Commission meetings and has been "impressed with the quality discussion and earnestness expressed by Chair Judge Daniel R. Foley (retired) and the various Commission members. The Commission continues to discuss and consider a long list of issues and proposals. They are actively seeking additional public input."
Hooser provided a list of proposals for consideration by the Commission that would:
Allow voters to decide whether or not to establish term limits for State legislators. Legislators in 15 other states including California are term-limited.
Establish a publicly fully funded election program providing qualified candidates sufficient means to run credible campaigns. He said that Maine and Arizona both have established "successful programs that can serve as models."
Require the legislature to comply with the state constitution Article III – Section 12 which says: "Every meeting of a committee in either house or of a committee comprised of a member or members of both houses held for the purpose of making a decision on matters referred to the committee shall be open to the public." Hooser said, "In other words ban backroom secret meetings that now occur in both the conference committee process and in regular committee meetings."
Require recorded votes by committee members for every decision impacting bills referred to their committee. "Remove the unilateral power of the Chair replacing it with rules making it clear that the Chair may make decision recommendations, but all decisions are validated and made public by a recorded vote of committee members. The current practice of allowing the Chair to kill bills, behind closed doors, without a vote, violates the core principles of our democracy and is inherently corrupt," said Hooser. 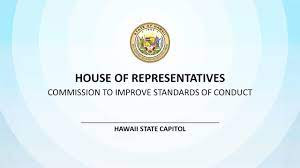 Require all elected officials holding a State or County office to disclose all outside income. "This disclosure shall include the specific source of the income, the amount of income received, and the service provided in return for that income. This should include client/consultant income from LLCs owned in whole or part by the elected official, and include income from legal clients of those elected officials who are also private attorneys," recommended Hooser. Restrict the use of campaign funds for use only in the campaign cycle they are donated in, and only for activities directly related to that campaign. "This means no hoarding of funds, and stopping the practice of using campaign funds as a general slush fund for non-campaign-related purposes," said Hooser.
Hoover offered "other important but less systemic in nature initiatives" that would:
Ban the acceptance or solicitation of campaign contributions during the legislative session. He noted that 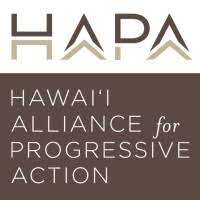 28 other states place restrictions on giving and receiving campaign contributions during the legislative session.
Ban all campaign contributions from corporations and registered lobbyists. Hooser noted that 22 other states completely prohibit corporations from contributing to political campaigns.
Reduce the maximum campaign contribution to $500.
Hooser encouraged citizens to email the Commission at standardsofconduct@capitol.hawaii.gov. He noted that all comments and testimony are placed on their webpage and available for public review. "This is important. I truly believe the CISC Commission is taking its job seriously and will do the right thing, but strong and broad-based public input is an essential element of making this happen," wrote Hooser.
To read comments, add your own, and like this story, see www.facebook.com/kaucalendar. See latest print edition at wwwkaucalendar.com. See upcoming events at https://kaunewsbriefs.blogspot.com/2022/04/upcoming-events-for-kau-and-volcano.html.