DANGERS OF FENTANYL ARE ON THE FRONT BURNER FOR HAWAI'I ISLAND POLICE. Hawai'i Police Department issued a statement on Wednesday, warning the public about the dangers of fentanyl after ongoing investigations led to recovery of fentanyl in various forms. Since issuing a warning about fentanyl in June, HPR reports the recent arrival of rainbow fentanyl on island, particularly in west Hawai‘i. It’s commonly called rainbow fentanyl because it comes in colored pill form that resembles candy.
“As of the last few weeks we’ve seen an increase in rainbow fentanyl in pill form,” says Lt. Edwin Buyten, of the Area II Vice Section. “Rainbow fentanyl is brand new to us here on island,” adds Buyten. It’s a marketing tool for the drug trafficking organizations meant to lure in a younger clientele. That’s concerning due to the danger it places on our island keiki and our community as a whole. With the Halloween season approaching, there’s an increased threat of children mistaking rainbow fentanyl for candy.”
Fentanyl is a synthetic opioid that can exist in various forms, including powder, tablet, capsule, solution and rocks. Although medically prescribed fentanyl has a legitimate purpose, illicit fentanyl, produced in unregulated and uncontrolled clandestine laboratories, can be deadly.
For the most part, illicit fentanyl pills and powders are manufactured in Mexico by drug cartels in laboratories, who profit by exporting their illicit drugs to the U.S. The concentration of the drug varies widely and as little as two milligrams (about one grain of Hawaiian salt) of fentanyl can be fatal in a non-opioid-tolerant individual.
“With the introduction of illicit fentanyl, it is cheaper and more readily available to opioid users. It’s flooded the market and it’s more dangerous,” says Buyten.
To combat this threat, Hawai‘i Island police have been increasing enforcement efforts to track down and dismantle the groups responsible for importing fentanyl and other drugs on island.
“We’re increasing our enforcement efforts by leveraging our partnerships with federal law enforcement agencies,” says Captain Thomas Shopay, of the Area II Criminal Investigation Division.
“These partnerships assist our personnel in the ability to identify traffickers on the mainland who are supplying our community with illicit fentanyl and allow us a greater ability to intercept fentanyl before it hits our streets.”
According to Buyten, in west Hawai‘i alone, the department has recovered an estimated 15,000 fentanyl pills in the last year. 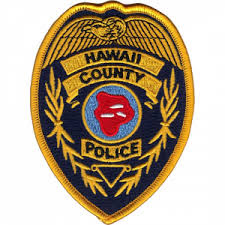 Last month Officer Justin Gaspar of the Area II Vice Section received the Officer of the Year award from the Kona Crime Prevention Committee for taking down a major drug distribution operation on island, recovering $1 million in illicit drugs, including 7,000 fentanyl pills and one kilogram of pure powdered fentanyl.
Illicit fentanyl was rarely seen on island before 2019 and when recovered by police, was usually in powder form. Because even a small amount can be fatal, the rate of overdoses is increasing.
In 2020, of the 24 drug related deaths on island, one was due to fentanyl. In 2021, there were 32 drug related deaths on island with seven of those deaths due to fentanyl. Hawai'i Police Department is currently investigating three coroner’s inquest cases that have occurred in the past week in which fentanyl poisoning is suspected.
Final determination in each of those cases is dependent upon the receipt of toxicology results and these investigations are ongoing. Because it can take months for toxicology reports to be completed, police are proactively reaching out to the public to increase awareness about the dangers of fentanyl.
Hawai‘i Island police suggests citizens be cautious of unknown or unlabeled powders, solutions, or rocks; pills or capsules that may resemble actual medications, but their origin is not certain. HPD suggests asking the following questions: Did it come from a pharmacy? Is it properly packaged/labeled? Is there a medical prescription associated to it? "If the answer is no, do not touch."
Recognize fentanyl poisoning by knowing that an individual experiencing it may exhibit one or more of the following: Drowsiness or unresponsiveness, constricted or pinpoint pupils, and slow or no breathing. "If these signs are observed, contact emergency medical services at 911 and provide a description of the circumstances.
HPD reports that one option may be to administer Naloxone, if it is available and you have received training in its administration. Otherwise, follow directions from the dispatcher until emergency medical services arrive.
What to do when encountering prescription medication or drugs of unknown origin? HPD urges: Do not touch them. Try to determine the item’s identity by checking with people who could have placed it there. If unable to determine its origin and the drug-related item seems suspicious, notify police at (808) 935-3311.
Those with information on suspected fentanyl trafficking, contact police at (808) 935-3311. Reports can be made for East Hawai`i to the Area I Vice section tip line at (808) 934-8423, or for West Hawai`i to the Area II Vice Section tip line at (808) 329-0423.
To read comments, add your own, and like this story, see www.facebook.com/kaucalendar. See latest print edition at wwwkaucalendar.com. See upcoming events at https://kaunewsbriefs.blogspot.com/2022/04/upcoming-events-for-kau-and-volcano.html.
A FOREST FAIR IS SET FOR NIAULANI. To celebrate the healthy rain forest, Volcano Art Center invites the community to the Annual Forest Fair, a one-day celebration on Saturday, Oct. 8 from 10 a.m. to 3 p.m. at Volcano Art Center’s Niaulani Campus at 19-4074 Old Volcano Rd. in Volcano Village.
The day will highlight features of the Niaulani Trail Enhancement Programs including the unveiling of new interpretive signage, displays, vendors, free forest tours, lei making, hula performances and plant and book sales. This free event will provide information on sustainable art, products and agriculture from the Islands making a fun, engaging event celebrating Hawai’i’s natural resources.
Situated in a restored native rain forest, known today as the Niaulani Forest, Volcano Art Center provides an intimate experience for people to engage with Hawaiʻi’s rain forests, plants, and native birds through its Niaulani Rain Forest. Year round forest programs focus on Hawaiʻi’s unique natural heritage, deepening the understanding of the land and its natural systems and highlight how to be stewards of Hawaiʻi’s most precious environmental resources for generations to come.
A native plant sale hosted by Volcano residents Allie Atkins and Ed Clapp starts the day beginning at 10 a.m. Endemic plants such as Ko’oko’olau, Kupukupu, and lama and others will be available for purchase. Allie Atkins of Lehua Lena Nursery will give a Landscaping With Native Plants talk beginning at 12 noon. Guided rain forest tours will be lead at 11am, 1 and 3pm, with self guided tours of the 1/7 mile Niaulani Trail ongoing. A hula performance by members of hālau Ke ʻOlu Makani o Mauna Loa under the direction of Kumu Hula Meleana Manuel will perform from 1-2pm. Both VAC Galleries will be open with special discounts on items relating to the Hawaiian rain forest made by local artists.
Saturday, Oct. 8 is also the Second Saturday of October. This month’s event at VAC features The Best Bratwurst Fundraiser beginning at 11 a.m. Lanikai Brewery will make a special appearance sharing beers for purchase just in time for Octoberfest. The day will end with The Volcano Art Center’s Sounds at the Summit concert series at 5:30pm featuring Constant as the Moon. Tickets are $25 for VAC members ($30 non-members).
Visit www.volcanoartcenter.org to participate in VAC’s Forest Fair and Second Saturday events. Support helps VAC continue its long tradition of environmental programming. Support from Hawai’i Tourism’s Community Enrichment Program allows these events to take place. Call 808-967-8222 for more information.
To read comments, add your own, and like this story, see www.facebook.com/kaucalendar. See latest print edition at wwwkaucalendar.com. See upcoming events at https://kaunewsbriefs.blogspot.com/2022/04/upcoming-events-for-kau-and-volcano.html.