MAUNA LOA AND KĪLAUEA ARE NO LONGER ERUPTING. U.S. Geological Survey’s Hawaiian Volcano Observatory made the announcement on Saturday. HVO lowered their Volcanic Alert Level for Kīlauea from Watch to Advisory and Aviation Alert Level from Orange to Yellow at 7:12 a.m., followed by the same change for Mauna Loa at 7:17 a.m. On Dec. 9, lava supply to Halemaʻumaʻu’s lava lake ceased, HVO drew the conclusion, based on measuring “lava lake levels and behavior of the crater floor.” However, “potential remains for resumption of this eruption or initiation of a new eruption at or near the summit of Kīlauea,” and “seismicity and deformation patterns remain unsettled.”

On Dec. 10, lava supply to active fissure 3 of Mauna Loa’s first eruption in nearly 40 years ceased: “Sulfur dioxide emissions have decreased to near pre-eruption background levels. Volcanic tremor and earthquakes associated with the eruption are greatly diminished. Spots of incandescence may remain near the vent, along channels, and at the flow front for days or weeks as the lava flows cool.                    However, eruptive activity is not expected to return based on past eruptive behavior. Summit and Northeast Rift Zone inflation continues,” said HVO. “A vent on the west side of the fissure 3 cone remains incandescent and occasionally produces small explosions as trapped gases are released. The lava flows around the vent remain hot and unstable. The vent area is also cut by numerous ground cracks,” HVO stated.
Hawai‘i Volcanoes National Park has closed the Mauna Loa Road from Kīpukapuaulu to the summit caldera, according to HVO.
According to the HVO website, sulfur dioxide emissions for both volcanoes have returned to background levels, similar to pre-eruption levels, for both volcanoes. However, residents and visitors should remain informed of possible hazards and “follow County of Hawai‘i and Hawaiʻi Volcanoes National Park guidelines.” HVO continues to closely monitor both volcanoes for signs of renewed activity: “Should volcanic activity change significantly a new Volcanic Activity Notice will be issued.”
Kīlauea updates will now be issued weekly on Tuesdays, Mauna Loa updates daily until Dec.15, after which they will be issued weekly on Thursdays. Should volcanic activity change significantly, a new alert will be issued.
For more information about activity and aviation color codes, see usgs.gov/programs. Stay up-to-date on Hawaiian volcanic activity at usgs.gov/observatories. See HVNP for visitor information: nps.gov/havo. Contact askHVO@usgs.gov for more.

GOV.  JOSH GREEN ANNOUNCED THE LAST BATCH OF DEPUTIES to state departments on Monday. The appointees are: 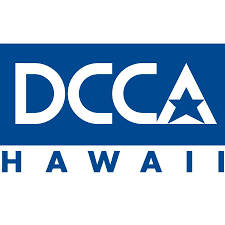 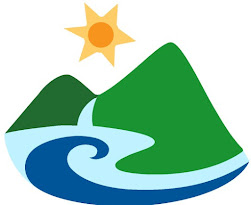 Scott Glenn, Director of Office of Planning & Sustainable Development - Green’s office stated: “Glenn returns to his roots as an urban planner and will leverage his passion and strength with climate policy to lead this office in a sustainable direction. He shares Governor Green's vision to grow our economy and address climate change simultaneously.”
James Koshiba, Governor's Coordinator on Homelessness - Koshiba has over 20 years of experience as a non-profit executive, policy leader, and community builder. He co-founded Kanu Hawai'i and Hui Aloha, where he has been an advocate and social entrepreneur focused on creating permanent solutions to homelessness.
To read comments, add your own, and like this story, see facebook.com/kaucalendar. See latest print edition at kaucalendar.com.

TAKE A FREE WORKSHOP ABOUT PESTICIDES tomorrow and Thursday. Attend via Zoom, or in-person in Kona or Kamuela. Offered by University of Hawai’i’s College of Tropical Agriculture and Human Resources, this Pesticide Safety and Education Workshop will teach about reducing pesticide exposure, pesticide labels, invasive species, and more. Up to four Continuing Education Units offered to attendees. Register at eventbrite.com.
To read comments, add your own, and like this story, see facebook.com/kaucalendar. See latest print edition at kaucalendar.com.

Christmas Lights & Icons Show brightens up the corner of Lehua and Palm in Ranchos at Ocean View every evening. Santa will be there on Christmas Eve to give 300 gifts, with a drawing for bikes to be given on Christmas Day. See story at kaucalendar.com.

Holiday lighting and decor are dressing up the cottages at Kīlauea Military Camp for the public to see. See story at kaucalendar.com.

A toy drive is ongoing at Cooper Center on Wright Road in Volcano through Saturday, Dec. 18. Unwrapped toys can be dropped off from 8:30 a.m. to 11 a.m. Monetary donations accepted. Toys purchased online can go to Cooper Center Community Pantry, P.O. Box 1000, Volcano, HI 96785.

Christmas in the Country is ongoing until the New Year at Volcano Art Center Gallery and VAC's Ni’aulani Campus. See story at kaucalendar.com. 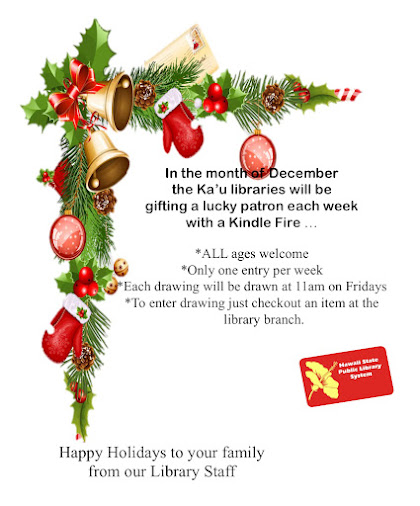 The Hiking Incentive Program at Kahuku Unit of Hawai'i Volcanoes National Park wraps up at the end of year. For the Kūkini Challenge, hikers, and walkers can turn in miles, recording them at the Visitor Contact Station for a chance to win a silver water flask and accolades for the fourth quarter of 2022.

Walk into the Past with Thomas A Jaggar to 1939. Talk with the founder of the Hawaiian Volcano Observatory, Dr. Thomas A. Jaggar, at the edge of Kīlauea volcano on Fridays, Dec. 16 and 23, at 10 a.m. and noon. Dressed in period costume, actor Dick Hershberger brings the renowned geologist to life. Space is limited; pick up free tickets at the Kīlauea Visitor Center lānai the day of the program. Supported by Kīlauea Drama Entertainment Network.

Christmas Keiki Party at St. Jude's Church in Ocean View on Saturday, Dec. 17 from 9 a.m to 11 a.m. with Giving Tree.

A night Christmas Parade in Nā’ālehu will be held on Saturday, Dec. 17, sponsored by Ka'ū Roping & Riding and featuring lights and displays after dark.

Volcano Thursday Market Christmas Fair will be Friday, Dec. 23 from 3 p.m. to 6 p.m with crafts, food, produce, live music and entertainment for kids at Cooper Center in Volcano, Wright Road.

Showers, soup, haircuts, and decorating of St. Jude's Church in Ocean View on Christmas Eve from 9 a.m to 1 p.m., with carols at 3 p.m. and Christmas Eve Service at 4 p.m, followed by Aloha Hour.

See daily, weekly, and monthly events, outdoor markets, and free food listings on page 8 and page 9 of the monthly print edition.
Posted by The Ka`u Calendar at 9:17 PM

THE DISASTER RECOVERY PROJECT FOR HAWAI'I VOLCANOES NATIONAL PARK will move forward. HVNP on Monday released its Finding of No Significant Impact on the plan called the Disaster Recovery Project, which addresses the 2018 eruption and summit collapse of Kīlauea volcano.
An HVNP statement says, "The park will carry forward most of the elements of the proposed action that went out for public review during the environmental assessment for the project. However, the park is revisiting the location of the replacement visitor center as a future planning and compliance effort based on public and consulting party feedback received during the EA review period.
"We mahalo everyone who shared their feedback on the Disaster Recovery Project," said Hawaiʻi Volcanoes National Park Superintendent Rhonda Loh. "We reviewed all the comments closely, and it is heartening to see how much passion the community has for their park and the cherished natural and cultural landscapes it protects."
The focus of the 2018 Disaster Recovery Project is to repair, replace, relocate or remove critical park infrastructure and U.S. Geological Survey-operated facilities and equipment damaged during the most destructive eruptive events in Hawai'i in the last two centuries.
Beginning as early as March 2023, the National Park Service  and USGS will:
Deconstruct the Geochemistry Annex, Jaggar Museum, and Okamura building in the Uēkahuna bluff area.
Repair the existing comfort station in the Uēkahuna bluff area.
Repair and improve the overlook in the Uēkahuna bluff area.
Construct a natural surface trail and associated post-and-cable barrier to connect the overlook to Crater Rim Trail in the Uēkahuna bluff area.
Remove and replace the existing water tanks in the Uēkahuna bluff area.
Deconstruct temporary National Park Service office space in the park research area and relocate National Park Service offices to the former USGS Pacific Island Ecosystems Research Center buildings.
Improve the safety of the existing park entrance and realign Crater Rim Drive, including the addition of a roundabout.