IS WHAT YOU SEE WHAT YOU SMELL, COMING FROM THE VOLCANO? That is the question posed in his week's Volcano Watch, written by U.S. Geological Survey Hawaiian Volcano Observatory scientists and affiliates. The answer from the HAVO scientists is "Surprisingly, no! When you see a volcanic plume on the Island of Hawai‘i, you may see a few different colors—white, or bluish, or brownish. Those different colors result from atmospheric scattering by liquid water droplets (white) and sulfate aerosols (blue, brown) in the plume. What you smell is sulfur dioxide (SO2), which is invisible to our eyes." Here is the rest of Volcano Watch:
Observations of SO2 are critical to both tracking and understanding eruptive behavior. The USGS Hawaiian Volcano Observatory relies heavily on measurements of SO2 emission rate, which is often used as a proxy for volcanic activity. Such measurements are also critical for vog (volcanic air pollution) forecasts and can be used for calculating lava eruption rates.
HVO also relies heavily on cameras to document activity, including both visual and thermal cameras. A third type of camera—an ultraviolet (UV) camera—allows volcanologists to visualize those important, and otherwise invisible, SO2 plumes. SO2 absorbs ultraviolet light, which makes it visible in UV imagery even when it cannot be seen by standard cameras.
UV cameras have been used at Kīlauea before. Patricia Nadeau, current member of the HVO gas geochemistry group, studied the summit plume using a UV camera in 2010 while a graduate student at Michigan Technological University. Later, in 2013, a combined effort between the Cascades Volcano Observatory (CVO) and HVO resulted in the installation of an automated UV camera system at the summit of Kīlauea. That camera station was removed in 2018 when it was threatened by ground cracking associated with summit caldera collapse events. A campaign-survey-style UV camera was also used for
part of the 2018 lower East Rift Zone eruption response, but HVO has not utilized such cameras much since then.
Now, with lava and strong SO2 degassing having returned to Kīlauea summit in late 2020, HVO and CVO are teaming up with colleagues at the University of Sheffield in the United Kingdom. The UK scientists have developed a new generation of small UV cameras that use Raspberry Pi technology. A Raspberry Pi is a small, low-cost computer, about the size of a credit card, and HVO has used them in other applications before.
The new cameras—PiCams—will be tested later this month and can be used as portable field tools or installed as permanent stations in HVO’s monitoring network. Pending the outcome of the initial tests, HVO plans to install at least one PiCam permanently at Kīlauea’s summit. A second PiCam will either be kept portable for flexibility or will eventually be installed near Mauna Loa’s summit.
SO2 emission rates can also be derived from UV camera images. Traditional SO2 emission rate measurements are made by traversing beneath the plume with a UV spectrometer mounted on a car, so that each measurement takes ten or more minutes, with only 6–10 of those measurements made per day. Beginning in 2012, HVO pioneered a network of continuous spectrometers to measure Kīlauea’s SO2 emission rate at a much higher temporal resolution than possible with vehicle-based measurements, but the network did not provide spatial information about the SO2 plume.
Once the PiCams are ready for use, they will provide both a 2-dimensional view of Kīlauea’s SO2 degassing as well as a high-temporal resolution, continuous timeseries of SO2 emission rate measurements.
The continuous SO2 emission rate data will make it easier to study degassing in conjunction with other continuous datasets, like earthquake activity and ground deformation. This will give greater insight into the role of degassing in specific eruptive events, something that has not always been easy to do in the past. Similar work has been done over the past decade at many volcanoes around the world—including here at Kīlauea, where earthquake activity and SO2 emissions were shown to be linked during lava lake rise-fall events in 2010. The current lava lake in Halema‘uma‘u has a different configuration and set of behaviors from the 2008–-2018 lava lake, and HVO is eager to see what the new PiCams will show us about the degassing of the new lake.

SOLVING THE 40 PERCENT PHYSICIAN SHORTAGE ON THIS ISLAND is one of the aims of a bill signed by Gov. David Ige last week. The bill, passed by the 2022 Hawaiʻi Legislature, references The Hawaiʻi Physician Workforce Assessment Project Report, which indicates that Hawaiʻi is in need of at least 750 doctors, with the greatest statewide shortage being in primary care specialties. The proportional need is greatest on the neighbor islands, with both Maui and Hawaiʻi County experiencing a physician shortage of 40 percent.
In addition to the bills introduced by the legislature, Ige identified the physician shortage as a priority at the start of the 2022 legislative session by including funding to expand the residency program at University of Hawaiʻi's John A. Burns School of Medicine.
“My administration is committed to supporting the development and expansion of high-quality educational and training sites, especially on the neighbor islands where we face the greatest challenge,” said Ige. “Mahalo to our lawmakers for also making this a priority and to JABSOM and our local medical partners for their dedication to ensure our local residents can access the healthcare they need now and in the future.”
Senate Bill 2657 funds JABSOM’s expansion of medical residency and medical student training opportunities on the neighbor islands, and with the U.S. Veteran Affairs Pacific Islands Healthcare System sites across the state––specifically in areas where healthcare is most needed. The VA is a valuable partner in JABSOM’s academic programs. Internal Medicine, Family Medicine, Psychiatry, Geriatrics, and Addiction Medicine residents or fellows have part of their curriculum based at VA sites.
Currently, some medical students complete pre-clinical rotations for up to three months on the neighbor islands of Hawaiʻi Island, Lanaʻi, and starting this academic year, Kauaʻi. Third-year students participate in a longitudinal clerkship program where groups of students train in the same location for a five-month long rotation in rural communities. Third year students presently train at several locations on Hawaiʻi Island, Maui and Kauaʻi.
“Data show that more than 80% of physicians who graduate from both JABSOM and its residency programs tend to stay in Hawaiʻi to practice—that is one of the highest retention rates in the country,” said JABSOM Dean Jerris Hedges. “We know that physicians who train in rural areas on our neighbor islands are also more likely to put down roots and nurture the communities that they’re in. We look forward to expanding our medical training opportunities to these underserved areas and to stay true to JABSOM’s vision of ALOHA: Attain Lasting Optimal Health for All.”
To alleviate the shortage of physicians in the state, more than 225 physicians participate in JABSOM’s Accreditation Council of Graduate Medical Education-accredited residency and fellowship programs. Kaiser Permanente Hawaiʻi also has a primary care internal medicine residency program and the Hilo Medical Center is the sponsor of the Hawaiʻi Island Family Medicine Residency Program. With the exception of the Hilo-based program, the remainder of these civilian residency programs are on Oʻahu, with some having clinical rotations on the neighbor islands. The neighbor island rotations – through the VA clinics or in partnership with other neighbor island physicians and health systems – gives residents and fellows the opportunity to train and eventually practice in rural areas. 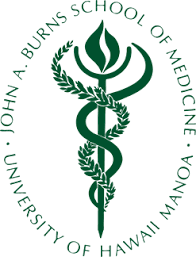 “Hawaiʻi Residency Programs, as the employer of the JABSOM residents and most fellows, is committed to our rural and at-risk communities by training our future physician workforce,” said Natalie Talamoa, executive director of Hawaiʻi Residency Programs. “We are excited that the State of Hawaiʻi shares our goal and look forward to working together on this initiative to invest in our neighbor island communities that have been hardest hit by the physician shortage. This funding will increase access to training opportunities for our residents and fellows, and provide them exposure and understanding of our most vulnerable populations so that they want to return to serve these communities.”
“The VA’s ability to expand Graduate Medical Education can help reduce the effects of a forecasted physician shortage here in the Pacific Islands, especially in Hawaiʻi, thanks to the partnership we have with the John A. Burns School of Medicine,” said Adam Robinson, Jr., director of the Veteran Affairs Pacific Islands Health Care System. “We take pride in providing the largest education and training enterprise for health professionals in the nation, but we can’t do it without the relationships we share with our valued academic affiliate residency sponsors.”
Senate Bill 2597 allows for more loans to be given in the Hawaiʻi State Loan Repayment Program, which helps graduates of JABSOM and other health professions reduce their educational debt in exchange for remaining in Hawaiʻi to practice. Loan repayment programs are a critical part of addressing the health professional workforce shortage, and Hawaiʻi’s program has proven to be highly successful.
According to JABSOM’s Hawaiʻi and Pacific Basin Area Health Education Center Director Kelley Withy, “83% of loan repayers have remained in Hawai‘i to practice, and 70% have remained at the site where they performed their service. Currently, there are 25 active providers in the program with another seven waiting for funding. We are very thankful to the legislature for the matching funds so that we can provide more opportunities to those interested in caring for communities where there is a dire shortage of healthcare providers.”
Health care professionals who have benefited from the loan repayment program serve on all islands and in the communities of Waimea, Kihei, Waiʻanae, Hilo and Wailuku; at Federally Qualified Health Centers in Kalihi-Palama and Kokua Kalihi Valley; and in public institutional settings at the federal detention center in Honolulu, the Halawa correctional facility and the Maui County correctional center. Health care professionals who are eligible to participate in the program include physicians, nurse practitioners, psychologists, social workers and many others.
Those present at the bill signing ceremony included state lawmakers Rep. Gregg Takayama, Rep. Ryan Yamane, Sen. Donna Mercado Kim and Sen. Jarrett Keohokalole, UH President David Lassner, JABSOM Dean Jerris Hedges, JABSOM Associate Dean for Academic Affairs Lee Buenconsejo-Lum, JABSOM Associate Dean for Administration and Finance Nancy Foster, as well as leadership from affiliated hospitals, the Hawaiʻi Residency Programs, Inc., the VA Pacific Islands Health Care System, and leaders from several of JABSOM’s clinical departments and the Office of Medical Education that oversees the MD Program curriculum.
Posted by The Ka`u Calendar at 10:58 PM