PEDRO ENITAN, 91 YEARS OF AGE, RECEIVED AN AMERICAN LEGION HONORS AWARD on Wednesday from Commander of American Legion Post 3, Retired U.S. Air Force Lt. Col. Harvey Motomura. He led the ceremony at Pahala Holy Rosary Church to commemorate Enitan's 60 years of service in the American Legion.
Enitan, who grew up and lives in Pāhala and is known for his shoreline fishing, served in the Korean War. He was eldest in a family of four sisters and a brother. He left school as a junior to help support his

family. After the Korean War broke out, in 1951 he enlisted in the U.S. Army and served with the 7th Army in Munich, Germany and was trained in dental technology. After the military, he worked for a contractor at Pacific Proving Grounds in Micronesia.
Upon his permanent return to Pāhala, Enitan "joined the American Legion Kaʻū-Pahala Post 7 to ensure that the liberties our country so deeply values are protected," said Motomura. He noted that Enitan's membership in American Legion "was instrumental in transforming the 'police action' classification in Korea into full-fledged war so that all honorable discharged veterans who fought gallantly in the Korean hills and rice paddies would be eligible for hospitalization, medical care, domiciliary treatment and burial benefits."
Motomura also pointed out that "with dwindling employment and closure of the sugar industry in Pahala (in 1996), the Kaʻū-Pāhala American Legion Post 7 shut down and Enitan continued his service through Post 3, with its headquarters in Hilo.
Motomura also acknowledged others who paved the way in the U.S. military for Asian Americans, 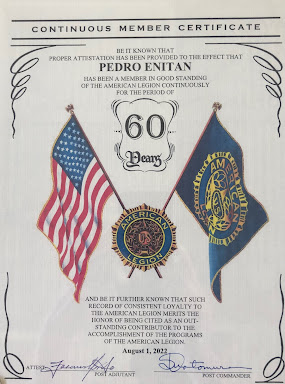 including 99-year old Iwao Yonemitsu, of the famed 442nd, Company L, comprised of Japanese American patriots in World War II who fought for the U.S. Yonemitsu was represented at the event in Pahala by his wife Alice.
Motomura noted that there were about 33,000 Japanese Americans fighting in World War II, many of them with family members who were put in detention camps. In Hawai'i fewer were detained and many joined the service and paved the path for Japanese Americans who moved up in the ranks in the U.S. military. Among them were three uncles of Eric Shinseki, who grew up in a sugar plantation town on Kaua'i. Shenseki graduated from West Point and became the only four star general of Japanese Ancestry in the U.S. Army. Shinseki served as Army Chief of Staff and Secretary of Veterans Affairs.
Motomura also noted that highest ranking Japanese American in World War II was John Aiso who became a Lt. Colonel and a U.S. Military Intelligence Service officer. After WWII, with Brown University and Harvard Law School degrees, Asio became the first Nisei judge in the U.S. rising to serve in the California State Court of Appeals.
Motomura also noted Harry B. Harris, Jr., whose mother Fumiko was Japanese. Harris was the first U.S Navy Admiral of Japanese ancestry and became the Commander of the Pacific Fleet and later the Commander of the U.S. Pacific Command. After he retired, he became Ambassador to South Korea.
For the Enitan event in Pāhala, giving the prayers and blessing the food was American Legion Chaplain and deacon Charley Mapa. Also attending was American Legion Department of Hawai'i District 4 Vice-Commander Antonio Gaspar from Kona and other American Legion members. Assisting were Peter and Fran Volpe and members of the Holy Rosary Hospitality Committee.
To read comments, add your own, and like this story, see www.facebook.com/kaucalendar. See latest print edition at wwwkaucalendar.com. See upcoming events at https://kaunewsbriefs.blogspot.com/2022/04/upcoming-events-for-kau-and-volcano.html.

MONEY FROM A COMPANY THAT PROMOTED VAPING will go to preventative and curative outreach in Hawai'i, which has the nation's highest vaping rate among middle schoolers and the second highest among high schoolers, according to the Centers for Disease Control & Prevention. "Nicotine addiction among Hawai‘i children, caused by the rise of e-cigarettes, is alarmingly high," said a statement on Wednesday from the office of the Hawai'i Attorney General.
Hawai'i AG Holly T. Shikada announced a $438.5 million agreement in principle

between JUUL Labs and 34 states and territories resolving a two-year bipartisan investigation into the e-cigarette manufacturer’s marketing and sales practices. In addition to the financial terms, the settlement would force JUUL to comply with a series of strict injunctive terms severely limiting its marketing and sales practices.
As part of the settlement, Hawai‘i will receive $6.8 million, which could increase to more than $7
million if JUUL opts to extend payments over a period longer than five years.
“Hawai'i’s youth have been disproportionately affected by the nationwide vaping epidemic,” said the Hawai'i Attorney General. “This settlement holds JUUL accountable for its targeted and misleading marketing and aims to prevent JUUL from getting more of our children addicted to its products.”
JUUL was, until recently, the dominant player in the vaping market. The Attorney General's statement said that a "multistate investigation revealed that JUUL rose to this position by willfully engaging in an advertising campaign that appealed to youth, even though its e-cigarettes are both illegal for them to purchase and are unhealthy for youth to use. The investigation found that JUUL relentlessly marketed to underage users with launch parties, advertisements using young and trendy-looking models, social media posts and free samples. It marketed a technology-focused, sleek design that could be easily concealed and sold its product in flavors known to be attractive to underage users. JUUL also manipulated the chemical composition of its product to make the vapor less harsh on the throats of the young and inexperienced users. To preserve its young customer base, JUUL relied on age verification techniques that it knew were ineffective."
The investigation revealed JUUL’s original packaging as misleading It failed to clearly disclose that it contained nicotine and implied that it contained a lower concentration of nicotine than it actually did. "Consumers were also misled to believe that consuming one JUUL pod was the equivalent of smoking one pack of combustible cigarettes. The company also misrepresented that its product was a smoking cessation device without FDA approval to make such claims," said the statement from Hawai'i's AG.    Once fully executed, the settlement will resolve the lawsuit filed by the Hawai‘i Department of the Attorney General against JUUL in 2020. Hawaii’s lawsuit alleged that JUUL used marketing strategies that targeted teenagers, making JUUL products seem desirable, all while falsely understating the nicotine content of the product and its addictiveness. However, Hawai'i’s claims against Altria Group, Inc. (the parent company of Philip Morris and JUUL’s largest shareholder) are not affected by the settlement and remain active.
State of Hawai'i is represented in the lawsuit by the Honolulu law firm Starn O’Toole Marcus & Fisher, and the national law firm Lieff Cabraser Heimann & Bernstein, LLP.
As part of the settlement, JUUL has agreed to refrain from: youth marketing; funding education  programs; depicting persons under age 35 in any marketing; use of cartoons; paid product placement;
sale of brand name merchandise; sale of flavors not approved by FDA; allowing access to websites without age verification on landing page; showing representations about nicotine not approved by FDA; misleading representations about nicotine content; sponsorships/naming rights; advertising in outlets unless 85 percent audience is adult; advertising on billboards; public transportation advertising; social media advertising (other than testimonials by individuals over the age of 35, with no health claims); use of paid influencers; direct-to-consumer ads unless age-verified, and giving out free samples.
The agreement also includes sales and distribution restrictions, including where the product may be displayed/accessed in stores, online sales limits, retail sales limits, age verification on all sales, and a retail compliance check protocol. 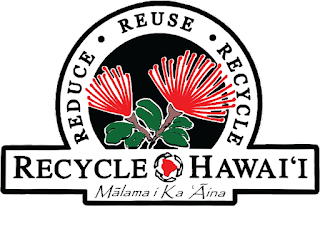 To read comments, add your own, and like this story, see www.facebook.com/kaucalendar. See latest print edition at wwwkaucalendar.com. See upcoming events at https://kaunewsbriefs.blogspot.com/2022/04/upcoming-events-for-kau-and-volcano.html.
ELECTRONICS RECYCLING EVENTS will be on a new schedule, according to a statement from Hawai'i County released this week. It said that a reduction of state funding is leading to "procuring a
replacement schedule of electronics recycling collection events for the remainder of the calendar year. Please know that we are working on this and look forward to announcing details when we have finalized them. The Department of Environmental Management will announce the collections first on our website at https://www.hawaiizerowaste.org/recycle/e-waste/." 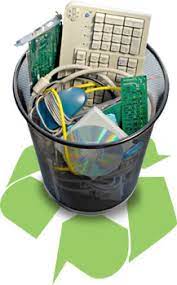 According to the County, "A more permanent electronics recycling solution will come in the new calendar year. The State of Hawai'i recently enacted Act 151 (2022), which mandates that 'Manufacturers must fully fund their recycling plan, including the collection, transportation, and recycling of all [specified] electronic devices in the State.' These plans include 'Manufacturer recycling goals,' and the plans 'shall provide collection services at a minimum of once per month', 'at no cost to the owner' in certain population centers (e.g., Kailua-Kona and/or Hilo) starting in January 2023."
The statement from the Department of Environmental Management states: "We want to thank the public for doing their part in responsibly disposing of their E-Waste and ensuring that our island home continues to be a clean and safe paradise." Visit www.hawaiizerowaste.org to register for Solid Waste Notifications (via email or text), or call the Solid Waste Division Office at 808-961-8270.To read comments, add your own, and like this story, see 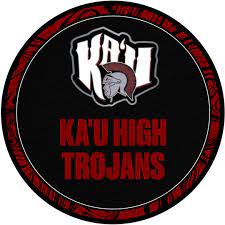