GENERAL ELECTION BALLOTS ARE DUE TUESDAY, NOV. 8 and many Kaʻū residents have already received them in the U. S Mail. The U.S. Postal Service recommends mailing them in by Nov. 3. Otherwise, they can be placed in drop boxes around the island, with the only one in Kaʻū at Na'alehu Police Station at 95-5355 Mamalahoa Hwy. The next closest are in Hilo and Kona. See the list at https://www.elections.hawaiicounty.gov/voting/voter-ballot-drop-box-locations.
As of Saturday evening on www.elections.hawaiicounty.gov, the county reported the mailing out of 111,550 ballots to registered voters with 31 ballots received to date in Hawai'i County. It was also noted 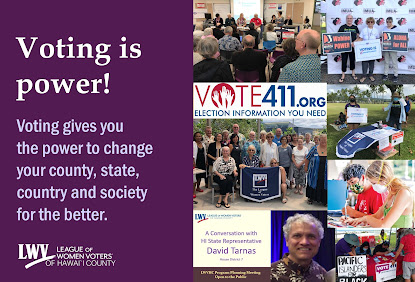 that some voters were reported, in error, as having ballots already received by the county. The county apologized and said the mistake was corrected following human error in its role of entering the data.
For this election some results are already final. Representing Volcano through Kaʻū and Miloli'i into Kona will be County Council member Michelle Galimba and state Sen. Dru Kanuha who won the primary election in August.
In the General Election, voters from Volcano through Kaʻū and Miloli'i into Kona will have the choice of voting for the person to serve them in the state House of Representatives, District 5. The candidates are Republican Lohi Goodwin, Democrat Jeanne Kapela and Libertarian Michael Last.
For Governor, voters throughout Hawai'i will choose between Republican Duke Aiona with running mate for Lt. Gov. Seaula Tupai, Jr., and Democrat Josh Green with running mate for Lt. Gov. Sylvia Luke.
For Office of Hawaiian Affairs, all registered voters are invited to choose to fill a Hawai'i Island Trustee vacancy between Hope Alohalani Cermeli and Mililani B. Trask.  For At Large Trustees, all registered voters are invited to vote for not more than three of the following: Lei Ahu Isa, Brickwod Galuteria, Sam King, Chad Owens, Keoni Souza and John D. Waihee IV.
For the U.S. House of Representatives, voters in this area and all of rural Hawai'i will choose between Republican Joe Akana, Libertarian Michelle Rose and Democrat Jill Tokuda.
For U.S. Senate, voters throughout Hawai'i will choose between Libertarian Feena M. Bonoan, Aloha 'Aina Party candidate Dan Decker, Republican Bob McDermott, Green Party candidate Emma Jane A. Pohlman and Democrat Brian Schatz.
The next election for Mayor will be in 2024. The next election for a U.S. Senator from Hawai'i will be in 2024.
To read comments, add your own, and like this story, see www.facebook.com/kaucalendar. See latest print edition at wwwkaucalendar.com. See upcoming events at https://kaunewsbriefs.blogspot.com/2022/04/upcoming-events-for-kau-and-volcano.html.

THREE AMENDMENTS TO THE COUNTY CHARTER are on the back of the State of Hawai'i, General Election Ballot, sent out in the mail and due Nov. 8.
The first asks the voters: "Shall the Hawai'i County Charter be amended to increase the membership of the Board of Ethics from five members to seven members?" 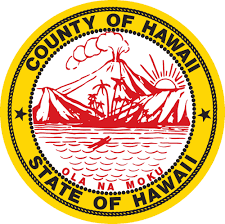 The second proposed amendment asks the voters: "Shall the Hawai'i County Charter be amended to expand the duties of the Office of the County Auditor to include investigating allegations of fraud,, waste, or abuse within the operations of the County of Hawai'i?"
The third proposed amendment asks the voters: "Shall the Hawai'i County Charter be amended to establish a Youth Commission, which would consist of at least nine but no more than 15 members between the ages of 14 and 24-years old, whose duties would include advising the Mayor, County Council, and official agencies of the County on legislative and budgetary matters, assess existing programs and advance new programs that support youth development, and encourage and coordinate youth participation on County initiatives and other forms of civic engagement?"
To read comments, add your own, and like this story, see www.facebook.com/kaucalendar. See latest print edition at wwwkaucalendar.com. See upcoming events at https://kaunewsbriefs.blogspot.com/2022/04/upcoming-events-for-kau-and-volcano.html.
IT WAS STANDING ROOM ONLY AT OCEAN VIEW COMMUNITY CENTER on Saturday, as County Civil Defense and Hawaiian Volcano Observatory representatives said that an eruption from Mauna Loa is overdue and people should be prepared.
Should Mauna Loa erupt, "It's going to be a difficult situation," said Civil Defense Director Taldmadge Magno, noting that  "governments can't do it all" and people have to take care of themselves. Preparations include knowing evacuation routes and putting together for items to take if an escape should be needed.
Ken Hon, Scientist in Charge at USGS Hawaiian Volcano Observatory, noted that Mauna Loa could erupt suddenly and it is impossible to predict exactly where it will happen until it does. It was also noted that Mauna Loa covers 51 percent of the island. There are shelters along evacuation corridors.
Participants in the meeting noted that the Kaʻū District has about 20,000 people and Hwy 11 is the only way out. The last time Mauna Loa erupted was in 1984. See more in Sunday's Kaʻū News Briefs. 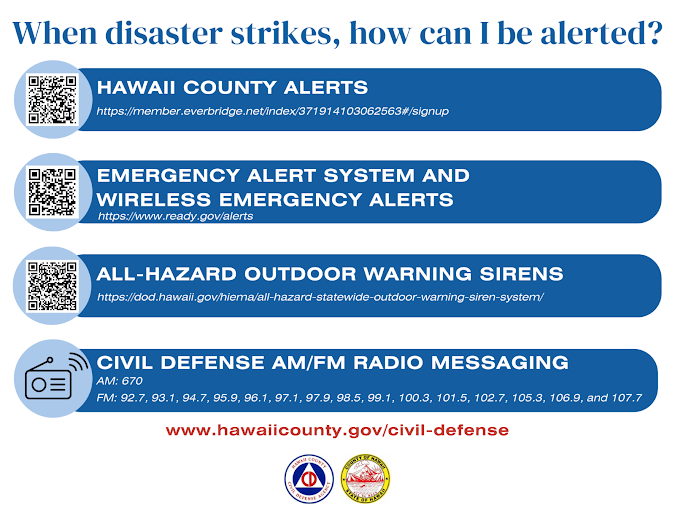 A CIVIL DEFENSE UPDATE ON EARTHQUAKES AND VOLCANOES and public discussion will be held live at Pāhala Community Center this Thursday, Oct 27 from 5 p.m. to 7 p.m. Hawaiian Volcano Observatory will participate with USGS scientists on hand, along with representatives of County of Hawai'i Civil Defense.

THE ALMOST CONTINUOUS SUMMIT ERUPTION at Kīlauea volcano turned one-year old on Sept. 29. Volcano Watch reports that the "past year’s activity has commonly been described as continuous effusion of lava within Halemaʻumaʻu crater. Although this has been mostly true—especially in recent months—there have been multiple occasions when lava was not flowing. What happened at those times, and why?"
Volcano Watch is a weekly article and activity update written by U.S. Geological Survey Hawaiian Volcano Observatory scientists and affiliates. Here is this week's edition:
During the late fall and winter of 2021–2022, the Kīlauea eruption would episodically pause for periods lasting from hours to days. These pauses typically occurred in conjunction with deflation-inflation (DI) events in the summit magma reservoir, as recorded by USGS Hawaiian Volcano Observatory tiltmeters in the region.
As the summit deflated the surface of the active lava lake would drop, eventually settling about 10 meters below the rim of the surrounding levees. At this point the lava would crust over, except for a small active pond near the western eruptive vent. Notably, during each pause there was also a substantial reduction in sulfur dioxide (SO2) emissions, suggesting that little to no magma was rising in the shallow conduit below the eruptive vent.
When the summit reinflated to a critical point, lava would flow from this pond to slowly refill the lava lake. Surges of lava followed many of the pauses and often caused overflows from the active lake onto large sections of the surrounding crater floor. Breakouts of lava from around the circumference of the crater floor were also common during eruption restarts. These events were responsible for significantly thickening the crust making up the current crater floor.
Why did these pauses occur? HVO scientists are still exploring this question. The pauses were clearly associated with DI events during this period. However, many other DI events occurred both before and after the period of pauses last fall and winter. The Deflation-Inflation events associated with pauses were not particularly large and some were tiny compared to many of those that preceded and followed the period of pauses. It remains curious why some of these DI events shut down the eruption while others caused only minor fluctuations in activity.

The last pause to date occurred on March 18, and since then there has been truly (or mostly truly) continuous lava effusion. The crater floor has also continued to rise due to lava spreading from the active lake to areas beneath the crust. This “endogenous” injection of lava lifts the crater floor, like the inflation of an air mattress.
The eruptive activity at Kīlauea summit was disrupted one more time on Sept. 20, when a swarm of several dozen earthquakes occurred below Halemaʻumaʻu. Simultaneously, tiltmeters measured rapid inflation in the summit region. Around 4:30 p.m. webcams recorded the higher central part of the crater floor dropping by several meters at the same time breakouts occurred along the lower margins of the crater floor. The earthquakes and inflationary tilt soon tailed off followed by the return of steady activity within the lava lake.
Initial observations suggested that the conduit to the eruptive vent may have experienced a structural failure—allowing dense lava below the crater floor to infiltrate the conduit, causing it to clog. Geophysical data from this event and the following days tell a very different story. Interferometric Synthetic Aperture Radar (InSAR) data from satellites show that an area around the west side of Halemaʻumaʻu crater uplifted by a couple centimeters around Sept. 20. Modeling of the seismicity and deformation by HVO scientists indicates that a horizontal body of magma, called a sill, may have been intruded between old layers of lava below the crater that day.

To read comments, add your own, and like this story, see www.facebook.com/kaucalendar. See latest print edition at wwwkaucalendar.com. See upcoming events at https://kaunewsbriefs.blogspot.com/2022/04/upcoming-events-for-kau-and-volcano.html.
A HALLOWEEN EVENT FOR OCEAN VIEW IS SET FOR Wednesday, Oct. 26 from 5:30 p.m. to 7:30 p.m. at Ocean View Community Center at 92-8924 Leilani Circle. There will be Goody Bags for the first 200 keiki and entertainment by Mr. Kneel, as well as Hip Hop for Families. Costumes are optional. It is sponsored by Neighborhood Place of Kona.