A TAIL BOOM SEPARATED FROM THE HELICOPTER, CAUSING THE KAʻŪ CRASH on June 8. That is the word from the National Transportation Safety Board regarding the Paradise Helicopter that went down around 5:26 p.m. as it traveled between Ocean View Ranchos and South Point Road during a round-the-island sunset flightseeing tour that originated at the airport in Kona. The crash led to injuries among the six on board, including serious injuries to the pilot and two passengers. The preliminary report from NTSB came out on Wednesday describing the tail boom separating from the fuselage of the Bell 407, causing it to shake violently and spin, according to a passenger who also reported seeing something fall from the helicopter. The copter landed hard on a remote stretch of lava, far from any road.
The victims were air lifted to an ambulance, with one taken by air to the hospital.
Investigators found the tail boom some 762 feet away from the fuselage, main rotor system and engine. The NTSB preliminary report noted the likelihood of fatigue of one tail boom fastener that was found with the wreckage. Another fastener is missing. The helicopter was about 25 years old. The NSTB final report is expected in about a year, after more investigation and examination of its remains at a hangar in Hilo and the completion of results of testing of its parts at laboratories specializing in this field.
Calvin Dorn, founder and chair of Paradise Helicopters, which is owned by K&S Helicopters, said the company "is working closely with the pilot, NTSB, FAA, and Bell, to support a thorough investigation of the June 8 accident on the Island of Hawaiʻi. All Bell 407 aircraft operated by K&S Helicopters have been voluntarily grounded out of an abundance of caution until further safety determinations can be made. The company is in the process of reviewing the preliminary NTSB findings, and we will continue to work with investigators as they complete a final report.”
To read comments, add your own, and like this story, see www.facebook.com/kaucalendar. See latest print edition at www.kaucalendar.com. See upcoming events at https://kaunewsbriefs.blogspot.com/2022/04/upcoming-events-for-kau-and-volcano.html.

KAI KAHELE MADE THE OFFICIAL COMMITMENT TO REFRAIN FROM BIG DONOR FUNDING. In the race for the Hawaiʻi governorship, Kahele raised enough small donations, some $104,000, to qualify him for matching funding from the state. He went to the Hawaiʻi State Campaign Spending Commission this week and filed an Application for Public Funds and Statement of Qualifying Campaign Contributions. Choosing the public funding option means he is not allowed to spend more than $2.1 million on his campaign. He also vowed to refrain from receiving money from corporations, Political Action Committees, unions and other big campaign spenders, limiting contributions to $100 from each person. He said he will not hold campaign fundraising events for the 2022 election.
In the past, Kahele did receive union and corporate money for his campaigns for state senate and the U.S. congress. In a press conference, he said, "I realize I was part of the problem. I am trying to change it."
His chief opponent, Lt. Gov. Josh Green, started his campaign early, and has raised
more more than $1.1 million for his war chest through contributions from a wide range of individual, corporate, union and PAC supporters.
Another Democratic contender Vicky Cayetano has received $665,000 for her campaign.
Kahele said, "Our campaign is fueled by everyday people. It is fueled by grass roots donors from across the state who believe that it is time for change in Hawaiʻi politics, who are tired of the status quo; who are tired of the rot and the corruption in our government."
Kahele's campaign platform at www.kaikahele.com makes a call to supercharge public campaign funding, lower contribution limits, cap campaign war chests, prohibit corporate and union contributions, and regulate bundling of contributions. It also calls for banning contributions to legislators' campaigns while the Hawaiʻi Legislature is in session.
On June 12, Kahele signed a pledge to support working people and "stand against big money and corporate influence that has held our State back from progress."
A statement from Kahele's campaign says, "Nearly 1,400 individual contributions from around the state contributed to the campaignʼs initial eligibility to file for public funds."
Kahele said, “We are honored by the tremendous show of support from working-class families across the state that has helped us achieve a remarkable feat in record time. Our campaign is powered by the number of people that support us rather than the number of dollars, and we are proud to be truly forging a movement that aims to restore trust in our government and its elected officials. We are committed to getting big money and special interests out of politics so that we can return Hawaiʻi to the people, and the groundswell of support we’ve seen thus far validates our message and gives us hope that our communities are ready for us to lead that change.”

To read comments, add your own, and like this story, see www.facebook.com/kaucalendar . See latest print edition at www.kaucalendar.com. See upcoming events at https://kaunewsbriefs.blogspot.com/2022/04/upcoming-events-for-kau-and-volcano.html.

MINIMUM WAGE WILL GO UP  TO $18 AN HOUR BY 2028 THROUGH A SERIES OF HIKES over the next six years, upping it from the current $10.10 per hour. Gov. David Ige signed the bill on Wednesday that passed the 2022 Hawaiʻi Legislature. The first hike is Oct. 1 when minimum wage will be $12 an hour. The measure signed by the governor also gives a one-time tax refund for the 2021 tax year.

To read comments, add your own, and like this story, see www.facebook.com/kaucalendar . See latest print edition at www.kaucalendar.com. See upcoming events at https://kaunewsbriefs.blogspot.com/2022/04/upcoming-events-for-kau-and-volcano.html.

VOLCANO VILLAGE FOURTH OF JULY PARADE welcomes walking and riding groups and individuals. It is sponsored by Volcano Community Association in Volcano Village from 8:30 a.m. to 1 p.m. The Monday, July 4 parade starts at the Post Office at 9 a.m. and ends at Cooper Center on Wright Rd., followed by Cooper Center’s Independence Day celebration packed with live entertainment, craft and food vendors, keiki games and a large silent auction from 9 a.m.to 11:30 a.m. Parking maps can be found at www.thecoopercenter.org. (No parking at Cooper Center except handicap permitted vehicles with prior reservation.) 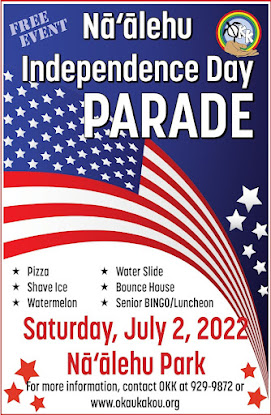 SPONSOR A BUCKLE, VOTE FOR RODEO QUEEN ahead of the Saturday, July 9 Rodeo organized by Kaʻū Roping & Riding Association and ʻO Kaʻū Kākou. Event to be held on the rodeo grounds behind Nāʻālehu Park. Call 808-854-7917.

EVENTS IN KAʻŪ & VOLCANO at https://kaunewsbriefs.blogspot.com/2022/04/upcoming-events-for-kau-and-volcano.html