EDUCATION ABOUT FENTANYL AND A RESCUE DRUG NARCAN GIVEAWAY come to Pahala Elementary & Ka'u High School on Tuesday with a session for the public at 5 p.m. and a free dinner, following sessions for students during the day.

Dr. Kimo Alameda, former CEO of Bay Clinic, VP of Hawai'i Island Community Health Center and leader of Hawai'i Island Fentanyl Task Force, advances the effort. He and his team provided streetside training on Saturday in Na'alehu at the former Bay Clinic.
They explained that Narcan is a nasal spray that is not harmful to those who take it and not dangerous to keep on hand for emergencies. It is administered by bystanders and emergency personnel who see a person who is unresponsive to touch, even rubbing the chest and is suspected of a Fentanyl overdose.
The way to help is to call 911 so an ambulance can come but in the meantime spray the Narcan into the victim's nose and put the person on his or her side, in case vomiting is the response when coming out of the stupor. According to Alameda and crew, Fentanyl takes the life of someone on Hawai'i Island about every 11 days. The Task Force is working with the state Department of Health, emergency responders and others to tackle the problem by taking the message and giving away Narcan throughout the communities around the island. To schedule a fentanyl presentation, email Alameda at adrkimo@icloud.com.

To read comments, add your own, and like this story, see facebook.com/kaucalendar. See latest print edition at kaucalendar.com, in the mail and on stands.

VOLCANO WATCH, WRITTEN BY USGS HAWAIIAN VOLCANO OBSERVATORY scientists and affiliates, this week looks at a mainland volcano considered to be high risk like Mauna Loa and Kilauea on this island. The column refers to it as the Unappreciated Giant and its name is Newberry Volcano:
Newberry Volcano is one of the largest and most hazardous active volcanoes in the United States. It is designated a “very high threat” volcano in a recent assessment by the U.S. Geological Survey, like Mauna

Loa and Kīlauea. It has been active for more than 530,000 years, most recently 1,300 years ago. Lava flows erupted at Newberry cover an area larger than Rhode Island. Powerful explosive eruptions sent volcanic ash into Idaho and the San Francisco Bay Area. A deep caldera indents its summit, hosting a flow of obsidian and thick beds of explosive pumice.
Do you know where Newberry Volcano is? Newberry is southeast of Bend, Oregon, and in fact basalt flows and cinder cones in Bend are part of the volcano. Most visitors to the booming city head west to ski at Mount Bachelor or hike in the Three Sisters area, a clustering of volcanoes in the Cascade Range. They may not notice Newberry, because of its broad shape unlike most steep Cascade volcanoes, although it stands 1.3 km (4270 ft) above its surroundings.
A recently completed, exhaustive study of Newberry by USGS geologist Julie Donnelly-Nolan and her colleagues shows that Newberry should be considered an eastern bulge of the Cascades volcanic arc. Its position 60 km east of the Cascade axis enables sweeping views of the volcanic range from the top of Paulina Peak, 2434 m (7984 ft) high, on the south rim of the caldera. From the summit on an exceptionally clear day, you can see from Mount Adams in southern Washington to Mount Shasta in northern California, a reach of nearly 500 km (310 miles). More than 500 m (1640 ft) below Paulina Peak lies the beautiful caldera with its two lakes and the geologic wonder of the Big Obsidian Flow. Then you can drive into the caldera to see these features up close.

A wide range of volcanic rocks characterizes Newberry. One important rock type is basalt, complete with extensive lava tubes and cinder cones familiar to us in Hawai`i. Basaltic andesite, similar to basalt but richer in silica, is more common, as in the Cascades volcanoes farther west, and Donnelly-Nolan mapped hundreds of basalt and basaltic andesite vents on the edifice. Dacite and rhyolite, still richer in silica and potentially very explosive but very rare in Hawai`i, complete the rock types. The Big Obsidian Flow has a rhyolite composition.
Newberry Volcano formed at the western end of the High Lava Plains, a broad volcanic region of basalt and rhyolite in southeastern Oregon that forms the northern sub-province of the extensional Basin and Range Province, best known in Nevada.
Newberry has the appearance of a shield volcano such as Mauna Loa, but this is misleading and overlooks its silicic explosive history. It is best characterized as a composite volcano like large volcanoes in Iceland.
Newberry developed where the northwest corner of the Basin and Range Province merges with the Cascades. Tectonic extension plays a significant role at Newberry and exerts strong control on vent alignments, which typically parallel fault trends. The caldera is at the intersection of fault systems of the High Lava Plains and Basin and Range, and the size and longevity of Newberry may reflect pathways to the surface created by this intersection.
Throughout its lifetime, Newberry has been the most explosive volcano in the Cascades, with at least 5 caldera-forming eruptions in less than 300,000 years. The most recent caldera developed about 65,000 years ago, when explosive eruption of basaltic andesite to rhyolite created the current 6 x 8 km (3.7 x 5 miles) caldera.

Several eruptions have occurred in the caldera since the last glacier melted nearly 12,000 years ago, the youngest of which, about 1,300 years old, produced the Big Obsidian Flow and a tephra that has been found in Idaho.
Newberry has one sibling in the Cascades. Donnelly-Nolan previously mapped the similar Medicine Lake volcano in northern California, about 200 km (120 miles) south of Newberry and east of the Cascade axis. Both large volcanoes provide the opportunity to visit a wide variety of young lava flows.
Seismic and geodetic monitoring has detected no unrest at Newberry. Eventually, though, the volcano will erupt again, and Newberry will be rightfully recognized among the nation's most hazardous volcanoes.
Volcano Activity Updates: Kīlauea is erupting. Its USGS Volcano Alert level is at WATCH. Kīlauea updates are issued daily.
Kīlauea volcano's summit eruption in Halemaʻumaʻu crater within Hawai‘i Volcanoes National Park continues. Activity is concentrated in a large lava lake in the eastern half of the crater, as well as a smaller lake to the west, in the basin of the 2021–2022 lava lake. Summit tilt has shown several deflation/inflation trends over the past week. Summit earthquake activity remains low and eruptive tremor (a signal associated with fluid movement) is present. A sulfur dioxide emission rate of 3,500 tonnes per day was measured on January 9. For Kīlauea monitoring data, see https://www.usgs.gov/volcanoes/kilauea/past-week-monitoring-data-kilauea.
Mauna Loa is not erupting. Its USGS Volcano Alert Level is at ADVISORY. Mauna Loa updates are issued weekly on Thursdays.
Webcams show no signs of activity on Mauna Loa. Seismicity remains low. Ground deformation rates and sulfur dioxide (SO2) emission rates are at background levels. For Mauna Loa monitoring data, see: 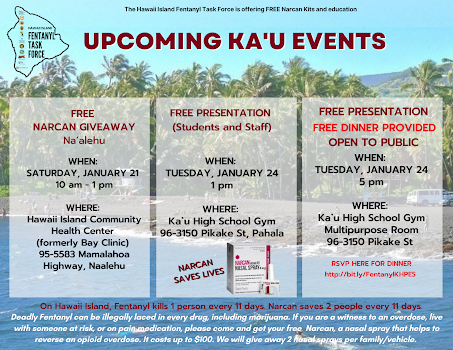 FREE FOOD
St. Jude's Hot Meals are free to those in need on Saturdays from 9 a.m. until food runs out, no later than noon. Volunteers from the community are welcome to help and can contact Karen at pooch53@gmail.com. Location is 96-8606 Paradise Circle Drive in Ocean View. Those in need can also take hot showers from 9 a.m. to noon and use the computer lab from 9:30 a.m. to 1 p.m.