THE COFFEE BERRY BORER was the subject of a press release by the state Department of Agriculture yesterday making statewide news. The ag department announced the detection of the coffee berry borer at one farm above Pahala. Farmers have joined with the grower at the affected farm to take out all the coffee cherries and beans and clean the trees and land earlier this week. The Department of Ag is conducting more surveys to determine the extent of the infestation.
The coffee borer was first confirmed on farms in Kona in September 2010 and is widely established on the west side of the island. This is the first detection of an infestation on an active Ka`u farm, though one unattended farm was found to have the borer in Wai`ohinu earlier. 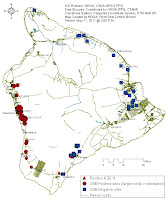 Staff from the U.S. Department of Agriculture’s Agricultural Research Service and the University of Hawai`i at Manoa - College of Tropical Agriculture and Human Resources are also working with Kona coffee farmers to try to control infestations with the use of an insect-killing fungus and field sanitation practices.
The borer is a small beetle and is native to Central Africa. It affects many coffee-growing regions of the world, including Central and South America. The beetle bores into the coffee berry to lay its eggs. The larvae feed on the coffee bean, reducing the yield and quality of the bean. Because the larvae live inside the bean, it makes it difficult to control with pesticides. Coffee growers in Ka`u are asked to inspect their fields and report any coffee borers as soon as possible to the state Department of Ag Hilo office at 974-4146. Inspectors from the Hilo U.S. Department of Agriculture – Animal and Plant Health Inspection Service, Plant Protection & Quarantine are also assisting in surveying for the coffee borer in Ka`u.
Hawai`i coffee growers in non-infested areas are also encouraged to be vigilant and report any suspected infestations to the state ag department’s Plant Pest Control Branch on O`ahu at (808) 973-9522 or e-mail: hdoa.ppc@hawaii.gov.

EDUCATION will be part of the Ka`u Coffee Festival this weekend, with classes on Sunday at Pahala Community Center. The education and farm tour day follows the full day of entertainment, coffee tasting and recipe contest at the community center this Saturday, when there will be more farm tours.


AN ANALYSIS OF AFFORDABLE HOUSING on this island has been published by Stephens Media. The story by writer Chelsea Jensen says that renting a two-bedroom apartment on the Big Island, with other money left over for food, health care and other normal expenses would require a job paying at least $22 an hour. “Many renters here make less than half that, according to a study by the National Low Income Housing Coalition,” Jensen points out.
The study, Out of Reach 2011, notes that 34 percent of the 63,209 households on the Big Island are renters, nearly the same as the national average. The state average is 42 percent, indicating higher home ownership on the Big Island.
Kapaau, Waimea, Kailua-Kona, Holualoa and Waikoloa affordable rent is $614 for studios; $810 for one-bedroom units; $909 for two-bedroom units; $1,282 for four-bedroom units and $1,469 for five or more bedrooms, the West Hawai`i Today article reports.
There is more affordability outside of Kona and Kohala. The Hilo and rural areas, including Ka`u average $574 for a studio; $735 for a one-bedroom; $900 for a two-bedroom; $1,090 for a three-bedroom; $1,195 for a four-bedroom and $1,373 for five or more bedrooms, according to West Hawai`i Today.
The cost of a rental is considered affordable if it does not require more than 30 percent of a renter’s income, according to the study.
The median renter in Hawai`i County makes $12.08 an hour, or $23,184 a year, while the median rental household earns about $42,996, according to the study. An “extremely low-income family” of renters earns about $20,502 a year, according to the study.

STUDENTS AT VOLCANO SCHOOL of the Arts and Sciences present their ninth season of an Evening of Theater tonight. Curtain time is 6 p.m. at Kilauea Military Camp Theater.

HAWAI`I WILDLIFE FUND sponsors a cleanup of the Manuka Natural Area Reserve on Saturday. Interested volunteers can contact Megan Lamson at 769-7629 or kahakai.cleanups@gmail.com.
ALSO ON SATURDAY, Friends of Hawai`i Volcanoes National Park have a Volunteer Forest Restoration Project in the Keanakakoi Special Ecological Area. Pre-register at 985-7373 or forest@fhvnp.org.
Posted by The Ka`u Calendar at 9:16 AM Links to this post