Going back in the history of western arrival in Hawaiʻi, the scientists write that “William Ellis, leader of the first missionaries to visit Kīlauea, described numerous pieces of windblown pumice (‘spumous lava...as light as a sponge’) in hollows on the ground as he approached the summit from the southwest on August 1, 1823. This must be the golden pumice. How long before his visit did the pumice fall?”
The scientists explain that, “Scattered remnants of a once-extensive pumice deposit occur on the ground surface west of Kīlauea Volcano’s summit caldera. The pumice, known as the golden pumice, records a large lava fountain in the southwest part of the caldera.
“In a study of the golden pumice published in 1987, three celebrated geologists – Bob Sharp (CalTech), Dan Dzurisin (USGS), and Mike Malin (Arizona State) – suggested an eruption date ‘possibly around 1820.’ The only rocks that fell later onto the pumice were, in their interpretation, erupted in 1924. They observed other thin deposits locally overlying (hence, younger than) the golden pumice but ascribed them to remobilization of older deposits by water, rather than to younger eruptions.
“These observations and interpretations led to the assumption – challenged in this Volcano Watch – that the golden pumice represents the youngest explosive eruption from the caldera until 1924.
“Several years ago, another pumice bed, called the eastern pumice, was discovered in the southern part of Kīlauea’s caldera. It underlies, and therefore is older than, explosion deposits consisting largely of rock fragments, not pumice.
“Work on the eastern pumice – see Volcano Watch for August 8, 2013 (http://hvo.wr.usgs.gov/volcanowatch/view.php?id=188) – tracked it westward into golden pumice
country. Nowhere, however, could we find the two deposits in the same outcrop, so we could not determine if the golden pumice was truly younger than the eastern pumice, as was assumed.
“We looked in just the right place and found clear physical evidence of  two pumice layers, one on top of the other. The older, lower pumice has the golden pumice composition. A chemical analysis of the younger, upper pumice, which looks physically like eastern pumice, was completed in late October, and it is indeed eastern pumice. The outcrop was examined once more in November with neutral observers, just to be sure, and the field relations were confirmed.
“This discovery upsets the apple cart. The assumption is wrong that the golden pumice records the last 19th-century explosion.
“Instead, the eastern pumice and at least four other explosions occurred later. The fallout from these explosions was directed mainly southward, rather than westward, so there is little overlap with the golden pumice. But there is just enough, as shown by that one outcrop, to prove the case and falsify the long-held assumption.
“Now we are challenged to determine better the ages of these eruptions. Had they all taken place before Ellis arrived, or were some explosions in the later 1820s overlooked because of infrequent visitation to Kīlauea? Do some of the rocks overlying the golden pumice, interpreted as reworked older deposits by Sharp and colleagues, instead record younger explosions? Could some of the rocks thought to be of 1924 vintage really be from the early 19th century? These
and other questions await answers. A geologist’s work is never done.” To read comments, add your own, and like this story, see Facebook. Follow us on Instagram and Twitter.

VOLCANO ACTIVITY UPDATES: Kīlauea continues to erupt at its summit and East Rift Zone. This past week, the summit lava lake level varied between about 7.5 and 20 m (25-66 ft) below the vent rim. The 61g lava flow continued to enter the ocean near Kamokuna. On Nov. 21, a new breakout from the upper part of the 61g tube on the flank of Puʻu ʻŌʻō sent surface flows to the east and south. These flows remained active as of Nov. 23. The 61g lava flows do not pose an immediate threat to nearby communities.
Mauna Loa is not erupting. During the past week, small (less than magnitude-3) earthquakes occurred primarily beneath the upper Southwest Rift Zone and summit caldera at depths less than 5 km (3 mi). Deformation related to inflation of a magma reservoir beneath the summit and upper Southwest Rift Zone continues, with inflation occurring mainly in the southwestern part of the magma storage complex. No earthquakes were reported felt on the Island of Hawaiʻi this past week. 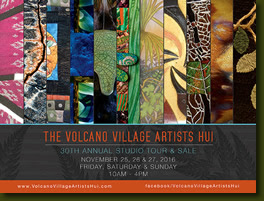 30TH ANNUAL VOLCANO VILLAGE ARTISTS HUI SHOW & SALE is today and on  Saturday and Sunday from 10 a.m. – 4 p.m., Volcano Village. Gallerygoers are invited to meet the artists in their studios located in Volcano. Artworks will be on display and available for purchase in a variety of media including pottery, raku, hand-blown art glass, sculpture, jewelry, and fiber art as well as photographs, paintings, drawings, metal work, quilts, and block prints.          A special drawing for pieces contributed by each of the artists will be held on the final day of the tour.

For more information, call 987-3472 or 985-7487. Maps to the artists’ studios are available at local businesses and galleries in the Volcano and at: www.VolcanoVillageArtistsHui.com. 987-3472.

TOMORROW IS THE SIXTH ANNUAL FLOATING LANTERN CEREMONY at Punaluʻu Beach Park’s Medicine Pond. In addition to participants building, decorating and launching tiny boats to carry lights honoring late friends and family, the gathering features community potluck, Taiko drummers, Gi Gon demonstration, hula dancers and local music, followed by a special photo powerpoint presentation of loved ones, caregivers and previous celebrations. The theme is “Honoring the Past, Present and Future Generations.”
To donate to the scholarship fund for health careers, call 928-0101. See more at Kaʻū Rural Health Community Association’s website https://krhcai.com and its Facebook page. To read comments, add your own, and like this story, see Facebook. Follow us on Instagram and Twitter.

CHRISTMAS IN THE COUNTRY holiday exhibit daily through Jan. 1 from  9 a.m. – 5 p.m., at  Volcano Art Center Gallery in Hawai‘i Volcanoes National Park. Featured at Christmas in the Country is the 17th Annual Invitational Wreath Exhibit, with prizes awarded for the best wreaths. To participate, contact Emily Weiss at 967-8222 or gallery@volcanoartcenter.org. Free; park entrance fees apply.