A SHARK SCIENTIST, who recently moved to Hawai`i Island, is tagging tiger sharks which the public will be able to track on an app. Dr. Michael Domeier began his research before the recent attacks on Poho`iki surfer Jimmy Ulu-Boy Napeahi, who was released from the hospital last Thursday, and a German tourist on Maui who lost her arm and then her life after a week of hospitalization. Domeier told Hawai`i News Now that tracking local sharks could help with understanding their behavior. He said the recent attacks could be an anomaly and not necessarily a trend toward more aggressive shark behavior.
Domeier and his Native Hawaiian crew tagged their first tiger shark for the project in Hawaiian Island waters in late August. The tiger is 13-feet long and weighs about 1,400 lbs. The crew named her Blue Moon when catching and releasing her outside of Honokohau Harbor. With a state Department of Land & Natural Resources representative watching, the crew attached a satellite tracking device to Blue Moon's dorsal fin. See footage on Hawai`i News Now at
http://www.hawaiinewsnow.com/story/23320937/big-island-researcher-tagging-tiger-sharks.

Domeier is President and Executive Director of MarineCSI, which stands for Marine Conservation Science Institute. He said that the organization was “founded on the belief that focused research can make a difference on how we view and manage our marine resources.”  He is considered an expert in the development of electronic fish tagging and for his tagging and following of the great white sharks. Domieir has a doctorate in marine biology from University of Miami and worked on the California Department of Fish & Game Marine Sport Research Project. For more than a decade, before moving to Hawai`i, he worked for non-profit marine oriented organizations, including Pfleger Institute of Environmental Research, the Society for the Conservation of Reef Fish Aggregations and the Marine Conservation Science Institute. He is also a pilot of airplanes and boats.
MarineCSI recently launched its app for iPhone and iPad for tracking sharks. It helps users learn more about sharks, including the ability to track satellite-tagged tigers and great whites. The app displays a map with live tracking data for the sharks tagged with real-time tracking devices, so that users can follow them at the same time as the research scientists. It is available on ITunes for $3.99. Another fundraiser for his work is the Rare Hawaiian Honey Co., which he and his wife Amy own in Kamuela.  Ten percent of the income from sales of its Great White 100% Organic Kiawe Honey goes toward funding research. See www.rarehawaiianhoney.com and www.marineCSI.org.

FARMER RICHARD HA, known in Ka`u for his opposition to a refinery and biofuel plantation planned by `Aina Koa Pono, has come out against proposed bills before the County Council that would limit the growing of Genetically Modified Organisms across the island.
In a statement submitted to The Ka`u Calendar newspaper, Ha writes, "If passed, Hawai‘i County Council’s Anti-GMO Bills 109 and 113, submitted by (county council members) Brenda Ford and Margaret Wille and to be heard on Sept. 4, 2013 at 1:30 p.m., will have unintended and serious consequences.
"Both bills send the wrong message to our next generation. In their actions, they imply that conventional farming is not an honorable profession. This, in turn, threatens our goal of food self-sufficiency.
"They threaten the livelihoods of Big Island farmers. Competitors who are not on the Big Island would be allowed to use new biotechnology, but not Big Island farmers. New technology generally results in lower costs, thus this would leave Big Island producers as high-cost producers.

"We are criticizing and threatening the farmers, the very people who feed us and the ones we should be encouraging to help us achieve food self-sufficiency.
"In the old days, farmers were held in high esteem. Criminalizing farmers is a new, and ill-advised, concept. What we need now is to slow down, take a deep breath and do things in a steady, rational manner.
"All major health and safety agencies, nationally and internationally, say there is no difference between biotech- and conventional-developed crops in terms of our health and safety.
"We are threatening the spirit of aloha. The last round of testimony on these bills resulted in a shameful display, lacking aloha altogether. This could have been prevented with better preparation.
"We should kill both bills and form a group – free of politics – to advise us how to proceed. This group should set a goal of figuring out how we can all work together to achieve food self-sufficiency in a way that benefits the most people. It should study economic impacts of various alternatives. It should study and report on the safety of Rainbow papayas. This group should also study the social impact of various alternatives.
"Instead of acting and then perhaps studying, we really must study the situation first before making decisions and acting," Ha concludes.
Ford said this morning that both GMO bills "are in Draft one and we need to discuss the bills in committee before making comments."  Ka`u Farm Bureau president Chris Manfredi recently called a meeting to discuss GMO legislation. The statewide Hawai`i Farm Bureau opposes restricting and labeling GMO's.

THE NATIONAL LIEUTENANT GOVERNORS ASSOCIATION has appointed Hawai`i's Lt. Gov. Shan Tsutsui to serve on a national policy committee. NLGA is the professional association providing research and issue exchange opportunities to the officeholders first in line of succession to governor in all 50 states and the U.S. territories. Tsutsui is serving as a member of the International Committee, which provides direction on opportunities for global engagement by the states’ seconds-in-command. “This role recognizes Lt. Governor Tsutsui as a point of contact and recognized expert for NLGA and to his peers,” said NLGA Director Julia Hurst.
“It is an honor being appointed to an important committee, such as the International Committee for the NLGA. Because Hawaii serves as a gateway between Asia and the Pacific, being appointed to this committee is a natural fit,” said Tsutsui. Earlier this year Tsutsui led a trade mission to the Philippines with Philippine Consul General of Honolulu Julius Torres.
Regarding his new appointment, Tsutsui said, “I’ll be able to share my knowledge on how Hawai`i continues to work on attracting the various visitor markets and business industries to fuel our economy.”

KA`U'S CONGRESSWOMAN TULSI GABBARD recently joined 53 other U.S. Representatives with a letter to Pres. Barack Obama urging him to turn to Congress for discussion on whether to attack Syria in the wake of its use of chemical weapons that apparently killed more than 1,000 people. On Saturday, Obama asked Congress to discuss the issue and to take a vote on whether to respond militarily, following the British Parlaiment voting to restrain from joining an attack on Syria. Gabbard, herself a veteran of Middle East conflicts, released the following statement:
“The use of chemical weapons and weapons of mass destruction is atrocious and violates international norms and basic human rights. The challenges faced by UN Weapons Inspectors as they gather evidence has only exacerbated this conflict that has gone on for too long, with countless innocent casualties.

“Right now, we do not have enough facts about all facets of what is occurring on the ground, the factions involved in this civil war, and what the unintended consequences would be for U.S. military involvement.
"Congressional debate and approval must occur before any U.S. military action is taken, and through this process we need to have a clear-eyed view of our objectives and what the outcomes would be, understanding the impacts in Syria, and those that extend far beyond Syria.”
The statement from members of Congress to Obama included the following satements: "We join you and the international community in expressing unequivocal condemnation over the news that chemical weapons were reportedly used by the government of Syria.
"While we understand that as Commander in Chief you have a constitutional obligation to protect our national interests from direct attack, Congress has the constitutional obligation and power to approve military force if the United States or its direct interests (such as its embassies) has not been attacked or threatened with an attack. As such, we strongly urge you to seek an affirmative decision of Congress prior to committing any U.S. military engagement to this complex crisis.
"While the ongoing human rights violations and continued loss of life is horrific, they should not draw us into an unwise war – especially without adhering to our own constitutional requirements. We strongly support the work within the United Nations Security Council to build international consensus condemning the alleged use of chemical weapons and preparing an appropriate response; we should also allow the U.N. inspectors the space and time necessary to do their jobs, which are so crucial to ensuring accountability."

AIKIDO CLASSES with Alan Morse begin tonight at a new location, the Old Pahala Clubhouse on the west end of Maile Street in Pahala at 6 p.m. Classes are free. 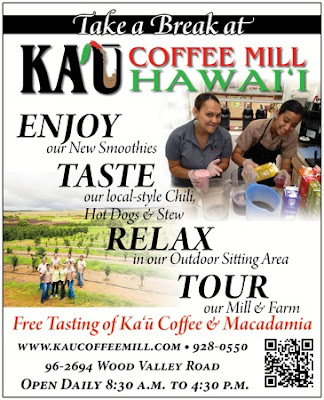 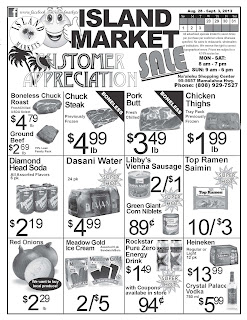 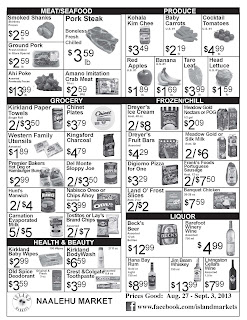