PA`A PONO MILOLI`I INC, a non-profit 501(c)(3) dedicated to improving the lives of the residents of the native Hawaiian fishing village of Miloliʻi, will receive a $140,000 grant from the Office of Hawaiian Affairs.
Funding is for fiscal years 2013 and 2014 is for preserving culture and traditional fishing practices. Beginning next month, Pa`a Pono Miloli`i will roll out activities, workshops, and enrichments for the Miloliʻi community, overseen by Kaimi Kaupiko, a native resident of Miloliʻi and graduate of the University of Hawaiʻi at Manoa Shilder School of Business.

Programs will include traditional ʻopelu fishing practices for which waters of Miloliʻi are famous. The organization will sponsor spring, summer and fall Lawaiʻa Fishing Camps. The first camp is July 10 – 13 and Ka`u youth are invited to apply, Kaupiko said this morning.
Another focus for the grant is reintroduction of hula and the Hawaiian language as well as restoration of the Miloliʻi canoes - the Hoʻomau and Malolo. Construction of a canoe hale adjacent to the Miloliʻi Community Enrichment and Historical Center is also planned.
Paʻa Pono Miloliʻi Inc. partners with Kua O Ka La Public Charter School, Hauʻoli Ka Manaʻo Congregational Church, Kalanihale Educational non- profit and Hoʻoulu La Hui. Outside agencies include Conservation International, Alu Like Hoʻala Hou, and the Queen Liliuokalani Childrens Center.
To sign up for camp and to learn more about the OHA Preserving Culture and Traditional Fishing Practice grant award for Paʻa Pono Miloliʻi Inc., call Kaimi Kaupiko at 808-937-1310.

KA`U’S CONGRESSWOMAN TULSI GABBARD voted yesterday for final House passage of the National Defense Authorization Act, which would authorize more than $400 million for Hawai‘i defense priorities. The bill passed by a vote of 315-108.
While pleased with the defense funding for Hawai`i, Gabbard said she is disappointed that her “bipartisan Military Justice Improvement Act to protect victims of military sexual assault was blocked from a vote on the House floor this week. This is not an issue that can be ignored. I will continue to work to make sure that we are honoring our selfless heroes by resolving this issue,” said Gabbard.
On the House floor, Gabbard talked about her amendment to strengthen and reform the backlogged Special Immigrant Visa program for Iraqi and Afghan citizens who served alongside American troops during war.
Gabbard said that while American service members are lauded and honored for their sacrifice, there are many civilians in such places as Iraq and Afghanistan, who are “unseen heroes who sacrifice every single day as they serve alongside our troops.” She pointed to two interpreters who served with her in a medical unit in Iraq. “One was named Kadam. He sat in our clinics, he went out on our missions with our medics and I spoke to him almost every day and learned so much about his family, his community and the challenges that he overcame every day to just work with us. 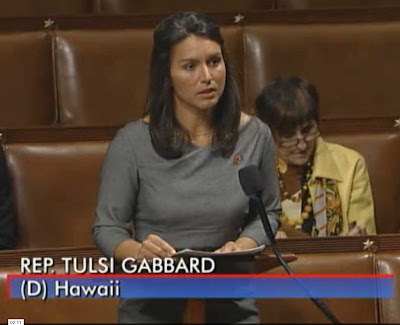 “He drove home every night with a firearm under his driver’s seat in fear not only of his own life but in fear of the health and safety of his family. He had a few young children and he spoke very strongly about his hopes and his dreams for them being able to have a future, to have an education, which was a far cry from the life he was living there. And that’s why he served with us.”
Another interpreter, whom the Hawaiian unit called Kahuna, worked in secrecy and lived at the U.S. military camp to protect his family. “His neighbors and friends did not know he worked with us,” recalled Gabbard.
Gabbard’s amendment to make immigration easier for these supporters of the U.S. passed with an overwhelming vote of 420-3.
The National Defense Authorization Bill includes military construction in Hawai`I with funds of $65 million for Fort Shafter, $236 million for Kaneohe Bay, $58 million for Pearl Harbor Naval Shipyard, $37 million for Joint Base Pearl Harbor-Hickam and $2.6 million for Ford Island – DISA.
It requires that the Department of Defense keep a THAAD missile defense system in Guam, full funding for Aegis Ashore ballistic missile defense in Hawai‘i, and strengthened ballistic missile defense in the Pacific region. Gabbard recently testified to the House Armed Services Committee in support of strong missile defense provisions.
The bill also includes a requirement for accelerated troop drawdown in Afghanistan and justification by the President for any American troops on the ground after 2014.

THE FORECLOSURE AUCTION CONFIRMATION FOR 5,800 ACRES OF Ka`u coastal, pasture and coffee lands has been set for 9 a.m., a week from today, June 27, in Honolulu before Judge Bert Ayabe in First Circuit Court, fourth floor.
According to a story in Pacific Business News: “The land, which was supposed to have been developed with a $105 million loan from Lehman Brothers before the deal got suspended by the 2008 Lehman bankruptcy, has an assessed value of about $13.6 million.
“It also has a remaining mortgage on the properties of almost $60 million.

“Alan Worden, a Massachusetts developer, spearheaded a group who bought the Ka`u district land in 2006, with plans to build out an eventual high-end residential development,” wrote PBN reporter Duane Shimogawa.
Lehman Brothers Holdings, which has reorganized to do business to pay off its debt, is foreclosing on Worden’s Windwalker companies which borrowed the money from Lehman against the property.
The land includes most of the farms on which the famous Ka`u Coffee is grown at Moa`ula and Pear Tree. It also includes pasture and coastal lands near Na`alehu, including Waikapuna and pasture lands mauka of Hwy 11 above Honu`apo.
During the confirmation hearing, additional bids will be allowed. During the auction on May 21, the highest outside bidder was Edmund C. Olson who bid $12 million. However, Lehman, which is owed more than $60 million on the property, bid higher and could choose to become the owner of the property, if no one bids higher than Lehman at the final foreclosure hearing.
Ka`u Coffee farmers said they are looking toward long-term leases or purchasing their farmlands from whomever becomes the next owner. The farmers, many of them displaced sugar workers who have built their own independent coffee businesses since 1996 when the mill shut down, are currently operating on land without long-term leases.

ABEL SIMIONA LUI, who lived at Kawa beach in Ka`u for more than 20 years, claiming ancestral and sovereignty rights before being evicted late last year, was back in court yesterday. According to a story in this morning’s Hawai`i Tribune Herald, Lui refused to sit at the defense table in the courtroom for a hearing on his arrest for illegal camping when he and a group of Hawaiian sovereignty supporters camped and planted taro around the King Kamehameha statue in Hilo. They were protesting the overthrow of the Hawaiian Kingdom in 1893, but were cited by the state Department of Land & Natural Resources for illegal camping. State workers pulled out the taro and re-sodded the land around the statue.

The story by John Burnett quotes Lui saying, “We gave these people notice that we was gonna do one vigil, that we’re here for that, nothin’ else. And the next thing you know, we all got arrested. So here we are. The county and the state says they own the land. Then come on, bring down you guys documents, whatever evidence that says you own it. That includes DLNR, who says they own the land. Where are you guys documents?
“This is crown land. That guy who is standing right there (Kamehameha I), it belongs to his people. And I’m an heir to all of that. That’s what gives us the right to be here. If the other people in the community can grow one garden (but) when it comes to the kanaka, cannot, I call that discrimination.”
Judge Barbara Takase delayed the hearing for Lui until July 24, after defense attorney Ivan Van Leer asked for it, stating “jurisdictional issues” as a cause for delay. See more at www.hawaiitribune-herald.com

VOLUNTEERS FOR HAWKSBILL TURTLES are helping to protect the endangered turtles this summer and fall through a program sponsored by Hawai`i Volcanoes National Park.
Since 1989, the Hawksbill Turtle Monitoring Program has been instrumental in studying and protecting the endangered hawksbill, Eretmochelys imbricata.
The hawksbill, called Honu`ea in Hawaiian, is the rarest turtle in the Pacific Ocean with not more than 10 to 20 individuals nesting per season in the Hawaiian Islands. The program engages at least 16 volunteers at a time from June through December each year.
A minimum commitment of 8 to 12 weeks is preferred. Duties include nightly watches at remote backcountry beaches – most of them in Ka`u - to observe nesting hawksbills and basking green sea turtles. Volunteers monitor nesting activities, handle and tag turtles, rescue stranded hatchlings, excavate nests, record field data, and trap and euthanize introduced predators (mongooses, rats, feral cats) to protect turtle eggs and hatchlings. Occasional beach clean-ups will be scheduled over the hawksbill nesting season.

According a call for volunteers, they “must possess an upbeat positive attitude, a love of the outdoors, be willing to camp in the field 4-6 nights per week (including some weekends), and be capable of working late into the night. Some sites are reached by hiking 7-12 miles in hot weather conditions with a 20 to 30 pound backpack, others by 4WD vehicle.” Volunteers must possess a valid U.S. driver's license.
The program provides dorm style housing at 4,000 - foot elevation in Hawai`i Volcanoes National Park and a meal reimbursement ($10.00 U.S. per working day).
Those interested in volunteering, can contact the Hawksbill Turtle Monitoring Program for an application by calling 985-6090, fax 985-6029, or write to: Hawai`i Volcanoes National Park, Hawksbill Turtle Monitoring Program, Division of Resources Management, P.O. Box 52, Hawai`i National Park, HI 96718 or email: HAVO_turtle_project@nps.gov.

THE BILL TO BAN NEW GMO’S from the island will be discussed at a meeting led by County Council member Margaret Wille and Professor of Tropical Organic Agriculture Hector Valenzuela from University of Hawai`i College of Tropical Agriculture & Human Resources. The meeting will be next Thursday, June 27 at UH Hilo, Room STB 108.
Following a short film about Genetically Modified Organisms growing in Hawai`i, the professor will give a presentation around the effects of GMOs in Hawai`i, and to other parts of the world. The council member will discuss Bill 79, which she introduced to prohibit further introductions of GMO crops on Hawai`i Island.
GMO Free Hawai`i Island will report on its actions in support of Bill 79. A question and answer period will follow.

Posted by The Ka`u Calendar at 10:20 AM Links to this post