BANNING PLASTIC BAGS used for carrying food and goods purchased from stores and restaurants on the Big Island could become law soon. The measure already passed first reading at the County Council with a 5 to 3 vote, and the final vote is likely to take place at the Dec. 21 council meeting, according to a Stephens Media report this morning.
The vote follows public hearings around the island. Council member Pete Hoffmann, who champions the measure, said he is comfortable with the final version and that the mayor is OK with it. “Let’s not sacrifice the environment on the altar of convenience,” Hoffmann told reporter Jason Armstrong. 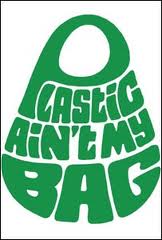 Hoffmann noted that the bill is not an outright ban on plastic bags. Council member Dennis Onishi, who opposes the bill, says that people would still buy plastic bags for lining trash cans in homes and offices, instead of using plastic bags acquired free during shopping. There will still be plastic bags going into the landfill, he said.
If passed, stores would be given a year to use up their inventory of plastic bags and build up paper bag supplies and to encourage people to bring cloth or other reusable bags for shopping.
According to the Stephens Media story, the eleven Subway franchises on the Big Island have already turned to paper.
Maui and Kaua`i already have plastic bag bans, and surveys show that more than half of Maui customers are not using bags provided by stores and restaurants there, the story said.
County Council chair Dominic Yagong said he will refrain from voting on the bill when it comes before the Big Island Council. He said his long-time employer Foodland will suffer a large cost increase as paper bags are much more expensive.


POLICE ARE SEARCHING FOR Rodney Naiole Kahele, of Ocean View, who is wanted on seven warrants with bail that totals $300,300. A statement from the Hawai`i Police Department describes Kahele as 6-foot-1, 180 pounds with black hair and tattoos on his back, arms and legs. Anyone with information can call Officer Dane Shibuya at 939-2520 or the non-emergency number 935-3311.
A 100-TON BOULDER CRUSHED their car on Hwy 11 near Kahuku Ranch in 2007, and victims Michael Patrick O’Grady and Leiloni O’Grady, of Ocean View, have gone to court. The Ocean View residents, one a school social worker and the other a speech pathologist, seek millions of dollars in medical expenses, wages and future lost wages. The trial began yesterday in Circuit Court in Hilo. Their attorney is Ron Self, of Wood Valley, and the judge is Greg Nakamura.
The defendant is the state Department of Transportation, which plaintiffs claim was negligent when it cut the road through the mountainside, leaving rocks and a giant boulder with no place to fall but the highway. A story in today’s Hawai`i Tribune-Herald by reporter John Burnett quotes Leiloni O’Grady recalling the rock slide coming toward her vehicle: “It looked like something on TV, with fingers of dirt coming down and the dust going up. Then this big boulder came down.” The boulder turned the car over and sent it sliding upside down.
According to the Tribune-Herald story, Patrick O’Grady recalled that he found himself “hanging upside down in the seatbelt, trying to breath. I was lying on the road, and one of my students came up and said, ‘Oh my God, Mr. O’Grady.” Patrick O’Grady has since recovered from most of his injuries and has gone back to work in the Ka`u public schools, but his wife says she may never work again.
MUSIC FOR CHRISTMAS is featured at concerts this weekend. The Ka`u Community Chorus, Hannah’s Makana `Ohana and the Ka`u `Ohana Band perform at 2:30 p.m. at Ocean View Community Center on Saturday and Discovery Harbour Community Hall on Sunday.
SUBMISSIONS OF WORKS for Volcano Art Center’s upcoming exhibit called Occupy Art are being accepted today between 2 p.m. and 6 p.m. at the Niaulani Campus in Volcano Village. This exhibit is open to all who care to express their opinions on the Occupy Wall Street movement, using art as a vehicle for creative and healthy expression. Any and all media are accepted, and there is no entry fee. Call 967-8222 for more information.
Posted by The Ka`u Calendar at 10:52 AM