TO HONOR VICTIMS OF THE MASS SHOOTING WEDNESDAY AT A FLORIDA PUBLIC SCHOOL, Hawaiʻi and U.S. flags are flying half staff until sunset on Monday. Gov. David Ige ordered all state and Hawaiʻi National Guard facilities to comply, and Pres. Donald Trump ordered all federal and military facilities, including naval vessels, to comply.
Said a statement from the governor's office: "This action is a mark of respect for the victims­­­­­­­­­­­ of ­the mass shooting at Marjory Stoneman Douglas High School in Florida."
On Wednesday, 19-year-old expelled student, Nikolas Cruz, took an Uber ride to the Parkland High School of 3,000 students. He carried an AR-15 and extra magazines of ammunition and proceeded to murder 17, and injured at least 14 students and staff. He left the school, was arrested nearby, and admitted to the crime.
Sen. Brian Schatz tweeted, "It is one of the great moral failures of American society that we allow kids to get killed in schools. No one thing can fix this, but doing absolutely nothing makes it worse."


MEASURES BEFORE THE U.S. SENATE TO PROTECT DREAMers, young working and student immigrants brought illegally to the U.S. as children, failed on Thursday. Sen. Mazie Hirono released a statement explaining her votes to help prevent their deportation. "I have consistently supported a clean DREAM Act, and voted in favor of the Coons-McCain amendment today that came very close to it. And while it earned the support of a bipartisan group of 52 senators, the vast majority of Republicans blocked this effort."
When Coons-McCain failed, she voted for another measure, the Rounds-King amendment, which included DREAMer protection, but also funding for Pres. Donald Trump's wall. Said Hirono, "We were left with only one option to protect the 800,000 current" - recipients of the Deferred Action for Childhood Arrivals - "DACA recipients and an additional one million DREAMers who the President has threatened with deportation. It's for them that I voted for the Rounds-King amendment." Hirono said she voted aye, even though it includes provisions she strongly opposes, including $25 billion for Trump's wall.
"The Republicans also sought to dismantle our legal, family-based immigration system," said Hirono. "Democrats fought hard to limit the damage. President Trump created this crisis when he cancelled DACA and threw 800,000 young people under the bus. And with his recent veto threat, he has made it abundantly clear that protecting Dreamers is the farthest thing from his mind."
Two other immigration measures also failed to pass on Thursday. The deadline imposed for replacing DACA is March 5.

DENNIS "FRESH" ONISHI will become the governor's liaison for East Hawaiʻi beginning Friday. Gov. David Ige announced the appointment on Thursday.
Onishi worked for the County of Hawai‘i for 29 years, including eight years on the Hawai‘i County Council. From 2008 to 2016, Onishi served as chair of the council's Committee on Environmental Management; chair of the Committee on Governmental Relations and Economic Development; and Vice Chair of the Committee on Public Works and Parks and Recreation.
Onishi has also worked for the Hawai‘i State Association of Counties, and most recently as interim president and chief professional officer of the Hawai‘i Island United Way.
"Fresh was born and raised in Hilo and has spent most of his life serving the people of Hawai‘i Island. I know that he will continue his exemplary service through the Office of the Governor," said Ige.
"I will always work hard for the people to make the Big Island a better place to live," Onishi said. Onishi is a graduate of Hilo High School and the University of Hawai‘i at Hilo.

A BILL THAT REP. TULSI GABBARD DESCRIBES AS UNDERMINING THE AMERICAN DISABILITIES ACT received her no vote on Thursday in Congress. The Americans with Disabilities Act was passed with bipartisan support and signed by Pres. George H. W. Bush in 1990. The new measure, HR620, would place "burdensome requirements on individuals with disabilities, making it

more difficult for them to access equal rights protections," said Gabbard. Nevertheless, HR620 passed the House by a vote of 225-192.
According to the Hawaii Disability Rights Center, 15 percent of Hawai‘i residents are disabled - higher than the national average. The National Federation for the Blind of Hawai‘i also reported that Hawai‘i is home to roughly 22,700 people with a visual disability.
Gabbard said, "For more than 25 years, the American Disabilities Act has been instrumental in expanding and protecting fair, equal opportunities for disabled Americans. HR620 unravels this progress, making it easier for employers to skirt around discrimination laws and requiring people with disabilities to jump through hoops for the equal access protections to which they are entitled. I've heard from many community organizations in Hawai‘i that shared how this legislation would hurt our more than 210,000 disabled residents. I stand with them in strong opposition to this harmful legislation."
National Federation of the Blind of Hawai‘i issued a statement saying the bill would "diminish the rights of blind people by eroding the foundation of the ." The  assures that all Americans with disabilities "have the right to live free from exclusion and discrimination in any way in American society. The  ensures that anyone with a disability can enjoy the benefits of living in our free and open state and country alongside all other citizens. In short, the  is the persons with disabilities equality act, which must not be diminished in either its force or effect. We call upon everyone in Hawai‘i and throughout the U. S. to join us in opposing HR620, which is a deceptive attempt to repeal the ADA."
Aloha State Association of the Deaf issued a statement saying it "strongly opposes this bill because it will affect Deaf, Deaf-Blind, and Hard of Hearing citizens of Hawai‘i." 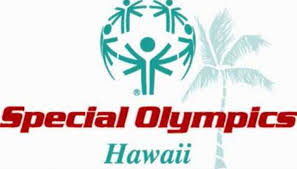 Special Olympics Hawai‘i issued a statement, saying that it "strongly supports legislation that guarantees the rights, full participation, and integration of people with intellectual disabilities. We appreciate the progress that has been made towards eliminating the stigma, stereotypes, isolation, and discrimination that people with intellectual disabilities face - most importantly around access to sport, health, and education. We ask Congress to remain vigilant against any erosion of any provisions that have made a substantial difference in the lives of people with disabilities."
HR620 is opposed by numerous civil rights, disability rights, and other organizations including AARP, Leadership Conference on Civil and Human Rights, NAACP, Consortium for Citizens with Disabilities, Paralyzed Veterans of America, Vietnam Veterans of America, American Association of Justice, ACLU, AFSCME, National Disability Rights Network, American Association of People with Disabilities, National Council of Disability, National Alliance on Mental Illness, Easterseals, National Foundation of the Blind, and United Cerebral Palsy.
To read comments, add your own, and like this story, see Facebook. Follow us on Instagram and Twitter. See our online calendars and our latest print edition at kaucalendar.com.

CELEBRATE THE YEAR OF THE DOG on a Mandarin-language, easy, guided, two-mile round trip, Chinese New Year hike, with Volunteer Janice Wei. The free hike is offered Friday, Feb. 16, and Sunday, Feb. 18, from  to , starting at  - nps.gov/HAVO.

LA‘AU LAPA‘AU, BEGINNER LEVEL CLASS, at Ka‘ū District Gym,  to , Saturdays, Feb. 17 and 24. Free; to register or for more details, call 969-9220 and ask for the Traditional Health team - hmono.org to learn more about the organization.

CELEBRATIONS HONOR HENRY ‘OPUKAHA‘IA AT PUNALU‘U. Bell ringing ceremony and gathering at Hokuloa Chapel at  on Saturday, Feb. 17.  A Remembrance Service will be Sunday, Feb. 18, at , also at the tiny chapel above the sea.

ALL YOU EVER WANTED TO KNOW ABOUT BONSAI AND HOW TO GROW THEM, with Sensei Bill Newton, Volcano Garden Arts, Saturdays, Feb. 17 and 24. $36 per person per class, space is limited - 985-8979 or volcanogardenarts.com. 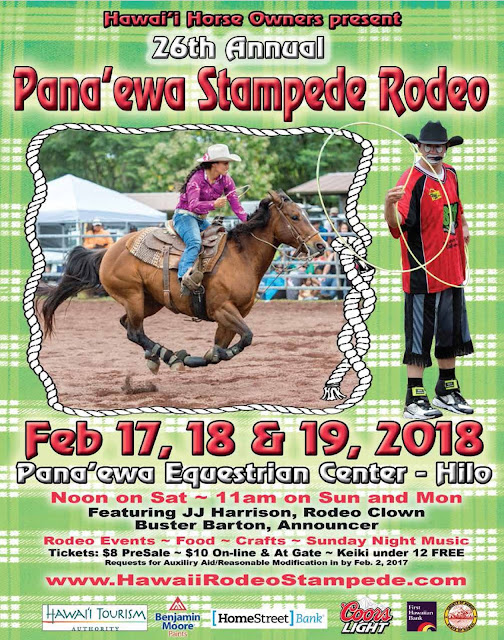 PANIOLO FROM KA‘Ū HEAD TO PANA‘EWA for annual Stampede Rodeo, Feb. 17, 18, and 19. Rodeo Grounds open at  on Saturday,  on Sunday and Monday. Buster Barton is the announcer and Rodeo Clown JJ Harrison will protect the paniolo and entertain - HawaiiRodeo
Stampede.com.


REGISTER FOR GIRL'S DAY PAPER FLOWER CLASS from Feb. 20 to 27, for keiki grades K-8 Wed., Feb. 28, from 3:30 p.m. to 5 p.m., at Pāhala Community Center. Call Nona Makuakane or Elijah Navarro at 928-3102. For more about these and other recreation programs: hawaiicounty.gov/pr-recreation. 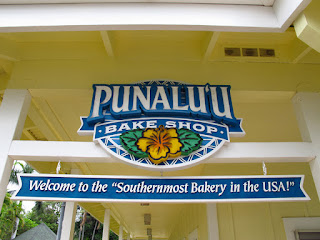 KA‘Ū COMMUNITY CHILDREN'S COUNCIL meets at Punalu‘u Bake Shop Thurs., Feb. 22, from noon to 1 p.m. The council meets on the fourth Thursday of each month - ccco.k12.hi.us.

UPCOMING
SUPPORT BOYS & GIRLS CLUB locations at Pāhala and Ocean View by purchasing tickets and sponsoring persons to attend the annual Youth of the Year celebration, Friday, Mar. 2, from 5:30 p.m. to 8:30 p.m., at Hilo Hawaiian Hotel, in the Moku Ola Ballroom. For 66 years, its outreach to the  has provided a safe and educational place for children after school.
To purchase tickets, contact Ka‘ū Boardmember Julia Neal at 928-9811 or mahalo@aloha.net. To purchase an ad in the Gala program, become a Gala sponsor, make a financial donation, or to donate an auction item, contact Gail Hamasu at 961-5536 or gail@bgcbi.org. 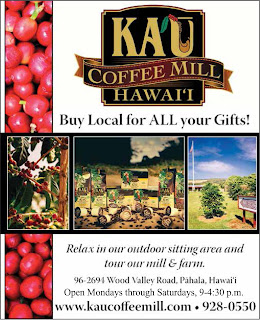 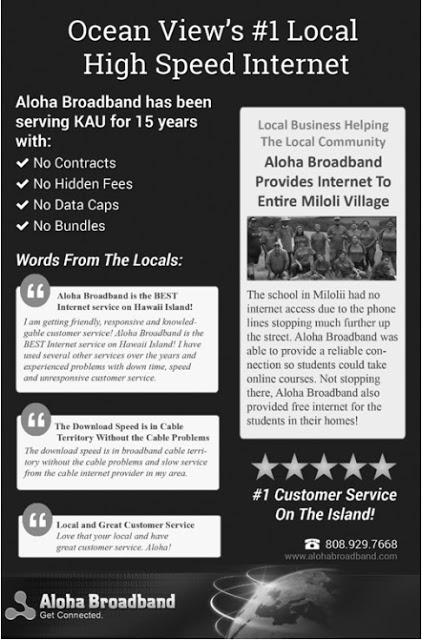 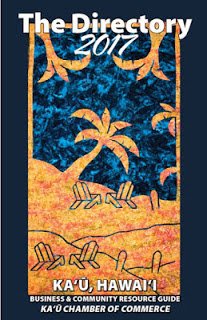