TODAY IS GENERAL ELECTION DAY, with polling places open from 7 a.m. to 6 p.m. In addition to voting for President, Mayor, U.S. Senator, Representatives to Congress, state House and state Senate, County Prosecuting Attorney and Office of Hawaiian Affairs Trustees, County Charter Amendments are on the ballot. They are: 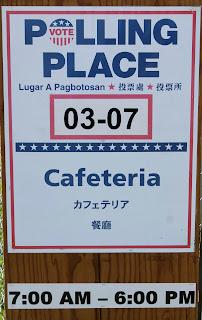 RECORDS AND MEETINGS OPEN TO THE PUBLIC:
Shall the County Charter be amended to repeal existing provisions relating to publication of notices of meetings of the council, boards or commissions to be replaced with: "The council, board or commission shall provide notice of any regular, special, rescheduled or emergency meeting according to the provisions of the Hawai‘i Revised Statutes"?

ESTABLISHING SPECIAL FUNDS:
Shall the Hawai`i County Charter be amended to allow the County Council to create special funds without first obtaining the recommendation of the Mayor?

ELIGIBILITY FOR REDISTRICTING COMMISSIONERS to be Candidates for County Council:
Shall section 3-17, County Redistricting Commission, of the Hawai‘i County Charter be amended by adding the following, to take effect after the 2021 Redistricting Plan: “(i) No member of the redistricting commission shall be eligible to become a candidate for election to the County Council in the first election under any such redistricting plan?”

ESTABLISHING A GAME MANAGEMENT ADVISORY COMMISSION:
Shall the Hawai`i County Charter be amended to create a Game Management Advisory Commission that would advise County, State, and Federal agencies on matters related to the preservation of subsistence hunting and fishing, protection of traditional and cultural gathering rights, and the taking and conservation of aquatic life and wildlife?

HERE ARE THE STATE CONSTITUTION AMENDMENT ISSUES ON THE BALLOT TODAY:

FUNDS FOR DAMS AND RESERVOIRS:
Shall the State be authorized to issue special purpose revenue bonds and use the proceeds from the bonds to assist dam and reservoir owners to make their facilities compliant with current safety standards?

WORK FOR RETIRED JUDGES:
Shall the chief justice of the state Supreme Court appoint judges who have retired upon attaining the age of seventy years as emeritus judges, permitting the appointed judges to serve as temporary judges in courts no higher than the court level they reached prior to retirement and for terms not to exceed three months per each appointment?

HAWAI`I RESIDENTS ARE ALSO VOTING for candidates for U.S. Senate and U.S. House of Representative. Here are profiles of each candidate:

MAZIE HIRONO (D), incumbent Congressional representative for Ka`u, Volcano and the rest of rural Hawai`i, says economic recovery cannot be left up to the private sector. Hirono says she wants government to help with research and development, including clean energy and food self-sufficiency. She says she fights for better education, which will lead to a stronger economy, protects Social Security and pushes for progressive health care. She says she opposes the Iraq and Afghani wars and supports taking better care of veterans. See mazieforhawaii.com.

KAWIKA CROWLEY (R) has given numerous Tea Party events, including a rally at the state Capitol, lobbying against higher taxes and government waste. On his website, he states, “Government, both here and in Washington, needs to go on a major diet. Bureaucracies such as the Department of Education, Department of Energy, the EPA, Department of Agriculture and so many others that siphon away taxpayer monies … must be reigned in and cut down to size.” He says he supports Hawaiian sovereignty, pro-life issues and the Defense of Marriage Act. See kawika4congress.com.

TULSI GABBARD (D) is an Iraq war veteran and Honolulu Council member. She was the youngest person to serve in the state Legislature and worked as aide to Sen. Dan Akaka. She says she wants to create jobs through tax breaks and eliminate redundant bureaucracy while ending tax deductions for corporations operating overseas. Other issues include bringing the troops home, strengthening tourism, renewable energy and agriculture, protecting Medicare and Social Security, repairing aging infrastructure and lowering gas prices. See votetulsi.com.

DEMOCRATS RALLIED LAST NIGHT at the Hilo Bandstand with mayoral candidates Billy Kenoi and Harry Kim taking their last stands on the podium. U.S. Congressional candidate Mazie Hirono was presented as filling the promise of the late U.S. Rep. Patsy Mink to become the first Asian female member of the U.S. Senate. State senatorial candidate Russell Ruderman said that he thought people might be surprised at his success in the primary and that his win showed the diversity of the Democratic Party. He also identified himself as an environmentalist and businessman.
Congressional candidate Tulsi Gabbard was presented as becoming the first member of Congress of Samoan descent, and many candidates urged everyone to tweet, email, facebook and call today to get out the vote in an effort to return President Barack Obama to office and to save the U.S. Senate from domination by Republicans.

THE PUBLIC LAND DEVELOPMENT CORP. went up in lights on the mauka side of the bandstand with illuminated lettering by Occupy Hilo saying “Abolish PLDC,” the new state agency that would work with private partners for economic development on public lands. Another sign was from Aloha Uprising organization, whose leader Gene Tamashiro interrupted a speech by Gov. Neil Abercrombie saying that Hawai`i is illegally a part of the United States. Abercrombie encouraged people with concerns and objections to take part in the democratic process, to put out the effort to earn the vote of the people and to refrain from interfering with the Democratic rally.
According to Big Island Video News, a group called Free Hawai`i met earlier in the day at the King Kamehameha statue in Hilo and discussed the recent eviction of Abel Simeona Lui from Kawa, where the county is planning a park and wetlands preserve. Lui presented his case to supporters of Hawaiian sovereignty who met at the statue, and a number of them continued to the Democratic Rally, where one man shouted about the plight of “Uncle Abel.”

HAWAI`I VOLCANOES NATIONAL PARK urges motorists to slow down and watch out for endangered nene while driving on Hwy 11 and other park roadways. A female nene was killed early Friday morning along Chain of Craters Road, and her mate remains near the site. The young pair was preparing to nest.
As nesting season begins, nene, particularly females, are focused on building up enough body fat to produce eggs and sustain them through the 30-day incubation period. As a result, females and their watchful mates are foraging not only during the day, but also at dusk and dawn and even throughout the night when the moon is bright.
Due to recent drought conditions, the vegetation is particularly dry at many of the favored breeding sites, pushing nene to move further afield in search of adequate food. Rain runoff from pavement, combined with ground disturbance along road edges, often makes for lush grassy strips along roads, enticing birds to feed in dangerous spots. Also, nene may be difficult to see along roadsides because their coloring often blends in with surroundings.
The park has placed nene crossing signs on roads where birds are known to congregate or cross and where vehicle kills occur most frequently.
Incidents of people feeding nene also have contributed to recent vehicle kills, park wildlife biologist Kathleen Misajon said. On Oct. 1, a 16-year-old male – a father of three fledglings last season – was killed by a vehicle along Hwy 11 one mile outside of the park’s Ka`u boundary.
“Nene have significant threats to contend with, from predation by cats, mongooses and other introduced predators, to loss of habitat made worse by drought conditions. This species is really fighting an uphill battle. We ask the public to help us rebuild nene populations by minimizing vehicle-related nenē deaths,” Misajon said.

VETERANS ARE INVITED to a free Hawaiian music concert on Saturday from 11 a.m. to 4 p.m. on the grounds of Pahala Plantation House. Musicians and students at the 7th Annual Kahumoku `Ohana Hawaiian Music and Lifestyle workshop share their talents, with water and plate lunches available for purchase. Call 938-6582 for more information.

VISIT OUR SPONSORS AT PAHALAPLANTATIONCOTTAGES.COM AND KAUCOFFEEMILL.COM. KA`U COFFEE MILL IS OPEN SEVEN DAYS A WEEK.

ALSO SEE KAUCALENDAR.COM AND FACEBOOK.COM/KAUCALENDAR.
Posted by The Ka`u Calendar at 10:52 AM Links to this post