KAHUKU LANDS AT POHUE BAY and the entire 16,000 acres around it could be protected as county land, if a resolution passes the County Council and money is found to purchase it.
The resolution calls for negotiations with landowners, and buying the property with Two Percent money raised from county property taxes as well as additional funding from other sources.
County Council member Brittany Smart is introducing the resolution to purchase part or all of the 16,000 acres recently known as the proposed site for the Nani Kahuku `Aina hotel, condominium and golf course development. Years ago it was known as the proposed site for the Riviera Resort, with a resort and marina.
Smart’s proposal gives the following reasons for preserving these Kahuku lands:
*The Hawksbill Sea Turtle is a federally listed endangered species and is the rarest sea turtle in the Pacific Ocean and the Pohue Bay area is known for sighting and nesting sites;
*Pohue Bay is the only white sand beach in Ka`u (within a forty mile radius) and has limited public access;
*Hawai`i Volcanoes National Park 2010 Hawksbill Sea Turtle Report recorded Pohue Bay with “nine nests from two returning hawksbills [that] were protected and over 1,300 hatchlings reached the ocean at this important nesting site;”
*Feeding sites for the threatened green sea turtle and for the endangered Hawaiian monk seal, rare anchialine ponds that host endemic and native shrimp species and insects, intertidal pool complexes that provide nursery habitat for marine invertebrates and fish, all exist in this area;
*Purchase of this parcel in the Ka`u region would benefit the island community as well as nearby towns by allowing access to Pohue Bay, which is currently under private ownership, previously planned for resort development, and currently restricted for private use only; and
*If the property is developed by a private party, the future use of this significant natural resource, historical, and cultural area would be subject to construction activities, possibly without input from the residents of Ka`u and the Native Hawaiian community.
A BAN ON SCUBA SPEAR FISHING, from South Point along the entire western Ka`u Coast and extending into Kona and to North Kohala’s `Upolu Point, is proposed by the state Board of Land & Natural Resources. The BLNR voted last Friday to take the issue to public hearing.
Calling for participation in the hearing, the Lost Fish Coalition issued a statement saying that “there has been a decade long endeavor to develop and fine tune a number of essential fisheries management recommendations for West Hawai`i. This effort is finally coming to fruition; but to ensure that, we all need to help.”
The hearing date is yet to be set but is expected this summer with a decision possibly this fall.
Scuba dive spear fishing is considered particularly detrimental at night since fish are often sleeping and can’t swim away. Hawai`i is one of the few places left in the Pacific Islands where spear fishing with scuba is still allowed and islands south report recovery of the reef life that maintains native fish populations and attracts visitors for snorkeling.
The regulations would make it illegal to have scuba diving gear, spears and speared fish on a boat, or otherwise in one’s possession on land or sea.
The BLNR proposal also calls for more regulations to restrict aquarium fish gathering.
The rules would cover the 147 mile nearshore waters in the West Hawai`i Fishery Management Area, formed in 1998.
The public hearing will be held in Kona and perhaps in Ka`u and is expected sometime this summer, with a decision sometime this Fall.
The West Hawai`i Fisheries Council supports and helped develop the proposals to restore and maintain reef populations. In places where aquarium fish collecting has been banned, yellow tang and goldring surgeonfish that are popular with collectors have seen a population rebound. Achilles tang and multiband butterfly fish have yet to see a resurgence. Pebble Beach at Kaohe Bay in South Kona would be designated as a Fish Replenishment Area and collecting for aquariums would be banned.
Outside the restricted area, the state would limit collecting to a list of 40 fish. The proposal is considered a test case for the rest of the state. 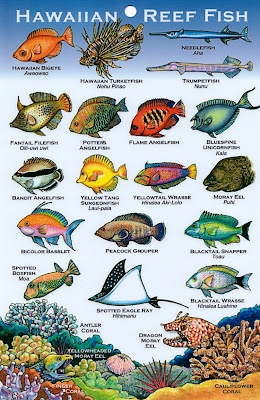 KA`U FOREST RESERVE’S Draft Management Plan is the topic at a public meeting this Saturday at Na`alehu Community Center, from 10:30 a.m. to 1 p.m.
The plan would be implemented over a 15-year time frame. To help preserve native species, it includes options for fencing portions of the 61,641 acre Ka`u Forest Reserve mostly in the upper elevations. The plan would provide trails for hunters and hikers.
Copies of the plan’s Draft EA can be read at Pahala and Na`alehu Public Libraries and online at http://oeqc.doh.hawaii.gov/Shared%20Documents/EA_and_EIS_Online_Library/Hawaii/2010s/2012-05-23-DEA-Kau-Forest-Reserve-Management-Plan.pdf.
Food and childcare will be provided during the meeting. For more information, contact Ron Terry at 969-7090 or rterry@hawaii.rr.com.

HAWAI`I WILDLIFE FUND has its third annual beach cleanup at Manuka Natural Area Reserve on Saturday. Volunteers should be able hikers wearing sturdy shoes and bring bag lunches, water bottle, snacks and sun and wind protection. Sign up for the events with Megan Lamson at kahakai.cleanups@gmail.com or 769-7629.

FRIENDS OF HAWAI`I VOLCANOES NATIONAL PARK sponsor a sneak preview of Kahuku Unit’s Kona Trail this Sunday, from 10 a.m. to 3 p.m. Park ranger John Stallman guides this four-mile roundtrip trek through highland pastures that offers participants excellent bird-watching opportunities along with information about the area’s natural and cultural heritage. $50 for Friends members; $70 for non-members. Students (K-12 and college with valid student ID) are half-price. Non-members are welcome to join the nonprofit Friends in order to get the member discount. Call 985-7373 or email institute@fhvnp.org.

SUPPORT OUR SPONSORS AT WWW.PAHALAPLANTATIONCOTTAGES.COM AND WWW.KAUCOFFEEMILL.COM.
Posted by The Ka`u Calendar at 12:57 PM