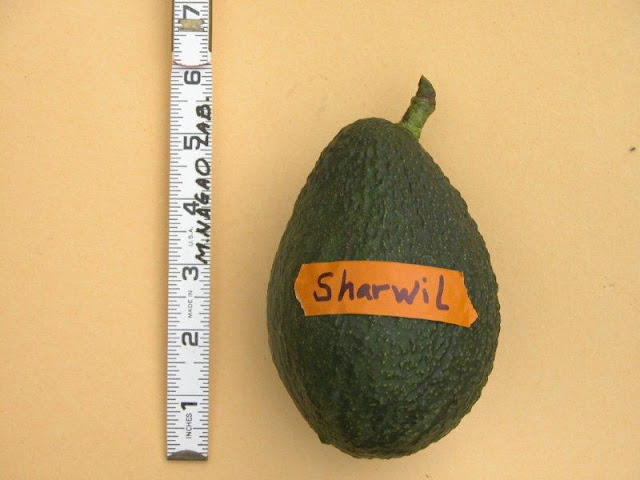 KA`U’S VERY TASTY AVOCADOS could soon have more than backyard value for fruit coming from one kind of tree. Hawai`i Sharwil avocados may receive permission from the U.S. Department of Agriculture for shipment to the mainland in winter, but only to the cooler states where fruit flies cannot survive. The USDA found that Sharwil avocados are more resistant to fruit fly infestation than many of the other types of avocados grown in Hawai`i. The agency projects that Hawai`i could export some 396,000 pounds of Sharwils a year to the mainland, which would call for increasing statewide production by 50 percent. In 2011, Hawaiian orchards sold about 700,000 pounds of Sharwil avocados. With mainland markets opening, sales could reach more than $1 million a year and grow significantly under a specialty Hawaiian branded label.

Avocado sales in Florida top $20 million a year. In California, avocado sales top $460 million a year. Sharwils, originally bred in Australia, fruit in winter, creating a natural market niche. The only states to which they would be imported, according to proposed federal regulations, are 32 northern tier states and Washington, D.C. from November through March. Agricultural practices would be closely overseen on registered farms by inspectors, with requirements to maintain fruit fly traps in orchards, keep records on any fruit fly presence and keep orchard floors clean from fallen fruit. Farmers would also have to pack mature, hard avocados with stems in place within 24 hours of picking. Each packaging facility would be registered and inspected as well as screened to prevent fruit fly entry. According to the USDA, U.S. consumption of avocados almost doubled between the years 2000 and 2010. The USDA is also proposing allowing avocados to be imported from Spain.
Big Island farmers have been writing in to encourage the exportation to the mainland. Sen. Brian Schatz wrote to the U.S. Secretary of Agriculture, noting that the late Sen. Daniel Inouye initiated two science panels with the best science and scientists re-examining shipping protocols from Hawai`i to the mainland. Schatz wrote, “Consistent with previous scientific findings, Sharwil avocados were again found to be very poor hosts for Oriental fruit flies. The panels went on to identify procedures that are part of a systems approach. With this approach, the risks of accidental introduction of Oriental fruit flies to the U.S. mainland are practically nonexistent.... We applaud the USDA in being so diligent in assessing and redefining shipping protocols for Sharwil avocados.”
With the avocados from Hawai`i being shipped in winter, they would mostly compete with foreign imported avocados rather than those from California and Florida, Schatz noted. “Given the superior quality of Hawai`i Sharwils, this competition would be good for the American consumer, for American farmers, and for the American economy,” Schatz wrote.
Volcano resident and chair of the Hawai`i Department of Agriculture Russell Kokubun wrote in support of easing shipping restrictions. He explained that ever since the suspension of exports in 1992 when Oriental fruit fly larvae were found in a shipment of avocados to the mainland, “the Hawai`i Congressional Delegation, the Hawai`i Department of Agriculture and the Hawai`i Avocado industry have worked very closely with the U.S. Department of Agriculture to strengthen the shipping protocols to minimize the risk of introduction of the Oriental fruit fly to the continental United States.”
Kokubun wrote that he does “not take these types of rule deliberation lightly. As a state with more than 25 percent of the organisms on the threatened and Endangered Species list, we know the importance of good science as the basis of shipping protocols. It is somewhat ironic that the pest at the center of the proposed rule, the Oriental fruit fly, is an alien invasive species inadvertently introduced to Hawai`i in the early 1900s.”
The background, proposal and comments on allowing untreated Sharwil avocados to be shipped to the continental U.S. can be read at http://www.regulations.gov/#!docketDetail;D=APHIS-2012-0008.

GREEN SANDS HOMEOWNERS ASSOCIATION met yesterday with County Council member Brenda Ford to talk about neighborhood initiatives including establishing a permanent park on land where the community now gathers on Ka`alu`alu Road and Pua Street. Community members also talked about better potable water service, including building water tanks and water pipes to service the homes. Currently, homes are served from meters on Ka`alu`alu Road that tie into the county water system. Spaghetti waterlines follow the road to the subdivision and go to individual homes. Maintaining the pipes to the properties remains the responsibility of the residents, even along county roads. The group also talked about the need to improve county roads.
Ford pledged to help the community study alternatives. She said she would work with residents to see if the park could be dedicated by its owner to the county, with a community group involved in its management. She also pledged to work on better potable water delivery to the homes. She also agreed that water storage is needed for firefighting and that fire hydrants are necessary throughout Green Sands.

OCEAN VIEW COMMUNITY ASSOCIATION’S regular pancake breakfast has resumed on the third Saturday of each month. More than 70 breakfasts were served last Saturday. Gov. Neil Abercrombie’s West Hawai`i Island liaison Barbara Dalton and her daughter Camille, a substitute teacher in Ka`u schools who also works at Volcano Garden Arts, volunteered to cook for the group. The breakfast is held at Ocean View Community Center beginning at 8 a.m. and wrapping up at 11 a.m.

THIS IS NATIONAL PARK WEEK, and Hawai`i Volcanoes National Park celebrates by waiving entry fees through Friday and offering special programs throughout the week.
Tomorrow at 11 a.m., volunteer ranger Charlene Meyers guides an invigorating four-mile, three-hour hike through the rain forest and onto the crater floor of Kilauea Iki. Participants learn how the 1959 eruption forever changed this landscape.  Meet at Kilauea Iki Overlook parking lot on Crater Rim Drive .
On Wednesday at 11 a.m. and 1 p.m., volunteer ranger Noel Eberz leads a one-mile, one-hour round-trip hike exploring volcanic features like fissures and lava trees that were formed during the 1969-74 Mauna Ulu eruption. The hike highlights the process of plant survival on this harsh lava landscape.  Meet at Mauna Ulu parking lot, four miles down Chain of Craters Road.
Ranger Adrian Boone leads a two-hour, 1.5-mile round-trip trek across ancient lava flows to Pu`uloa Petroglyphs, the largest petroglyph field in Hawai`i, Thursday at 1 p.m. Participants discover the meanings inherent in these rock carvings and gather a greater understanding of the native people who created them.  Meet Boone at Pu`uloa Petroglyphs parking area near the end of Chain of Craters Road, a 45-minute drive from the park entrance.
Participants should wear sturdy hiking shoes and long pants and bring a hat, raingear, day pack, snacks and water.
For these and other regularly scheduled programs, see nps.gov/havo.

THIS SUNDAY’S KA`U COFFEE RECIPE CONTEST deadline has been extended until Friday, April 26. The event, called the Triple C Recipe Contest for Cookie, Candy and Cracker recipes using Ka`u Coffee, takes place on Sunday at Ka`u Coffee Mill as the mill celebrates its first anniversary. The afternoon includes Ka`u Coffee tasting from 1 p.m. to 4 p.m., and music with Keoki Kahumoku and the `Ukulele Kids. Meet Miss Ka`u Coffee and tour the Ka`u Coffee Mill and Farms.
The recipe contest for professionals, amateurs and students begins at 2 p.m. The winner of each Ka`u Coffee Cookie, Ka`u Coffee Candy and Ka`u Coffee Cracker category in each division will receive a $150 prize. Second place will receive $100, and third place will receive $50. The overall Signature Grand Prize winner will receive $500. See the entry form in the April Ka`u Calendar newspaper or download it from www.kaucoffeefest.com or www.kaucoffeemill.com.
Entry forms and free bags of coffee to use in contest entries are available at Ka`u Coffee Mill, and in Pahala at R&G Store and Pahala Plantation Cottages office.

ALSO SEE KAUCALENDAR.COM AND FACEBOOK.COM/KAUCALENDAR.
Posted by The Ka`u Calendar at 12:22 PM Links to this post