THERE IS MORE REASON to carpool or take the Hele-On bus this week. Gas prices continue to soar. In Pahala this morning, Ka`u Gas sold regular for $4.80 a gallon. In Na`alehu at the Wiki Wiki, it sold for $4.69. Kahala Gas in Ocean View sold regular for $4.60. Ocean View Market declined to give out its price, and Kahuku Country Mart had the lowest gas prices in Ka`u at $4.55 a gallon. 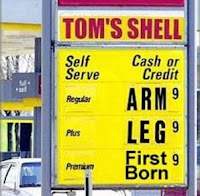 Statewide, the price for regular was $4.64 in the Neighbor Islands, $4.65 in Hilo. Nationwide, regular gas prices averaged $3.84 a gallon this morning. Prices across the country rose more than 20 percent in the last month, going up every day over the last nine days. The historic high nationwide was $4.11 a gallon in July of 2008.
The county bus, which is free for seniors and students and $1 for everyone else, travels to and from Ka`u to Kona and Hilo several times a day. See schedules at www.heleonbus.org.

GOVERNMENT TRANSPARENCY in Hawai`i is poorly enforced, ranking 44th among all the states, according to the recent State Integrity Investigation on transparency, accountability and anti-corruption. Civil Beat, which helped conduct the study along with other organizations nationwide, reports on the “enforcement gap” in Hawai`i, where there are laws on the books to protect the public from lack of transparency and accountability. However, these laws are lacking in their enforcement. States scoring lower in this area were Texas, Kentucky, North Carolina, Ohio, New York and Maryland.
Civil Beat editor John Temple said that his news organization has faced challenges in gathering information from state government. He said reporters have “been blocked from reviewing court records and seen huge price tags put up when we’ve asked to review documents. Many government officials appear to have taken a code of silence after taking office, except when it comes to cutting ribbons or sharing happy talk,” the editor wrote.
Overall, Hawai`i received a C grade on the Corruption Risk Report Card. The State Integrity Organization suggests that citizens email the report card to public officials. The Hawai`i Report Card can be seen at and directly emailed from www.stateintegrity.org. See more at civilbeat.com.
SEN. GIL KAHELE, who represents Ka`u and South Kona, will face County Council member Donald Ikeda in this year’s run for state Senate. Kahele, however, would be representing Hilo, as the political boundaries recently changed with reapportionment. Running to represent Ka`u, so far, are Sen. Josh Green for the district extending from Honu`apo to Kona Airport and Rep. Bob Herkes, from Punalu`u through Puna. Herkes faces opposition from former County Council member Gary Safarik.
NO ENVIRONMENTAL ASSESSMENT would be required for exploratory geothermal well drilling anywhere in Hawai`i, in a proposal before the state Board of Land and Natural Resources. Hawai`i Reporter’s Big Island writer Sydney Ross Singer puts it this way: “Once a good site for geothermal energy production is found, the EA process would then apparently kick in. Of course, after money and time are invested in finding a potential geothermal resource site, there will probably be enough steam to roll over any public opposition.”
Singer writes that “getting geothermal energy from a live volcano may entail awesome technology and be a great way to wean ourselves from fossil fuels. But the public has been burned by geothermal energy in the past. With the proposed exemptions to allow exploration well drilling without an Environmental Assessment, the public is again being marginalized….”
The Environmental Council, under the state Office of Environmental Quality Control, is studying the proposed exemptions for geothermal. It could either agree or fail to “concur” and return the exemption proposal to the BLNR. A public 30-day comment period ends April 6. Possible geothermal sites in Ka`u include Kalae and the Ka`u Desert. Comments can be sent to www.environmental.council@doh.gov.

MAYOR BILLY KENOI COMES TO KA`U tonight to listen to the public and answer questions. The meeting, which will also be attended by county department chiefs, will be held at the Na`alehu School Cafeteria beginning at 6 p.m.
VOLUNTEER INCOME TAX ASSISTANCE is sponsored by Goodwill Industries of Hawai`i. The help is for households earning less than $50,000 in 2011. The nearest site to Ka`u is in Kona at Goodwill Industries of Hawai`i on Thursdays from 4 p.m. to 7 p.m. until April 5 at 74-5599 Luhia Street, F-4. Call 430-0608.
COMMENTS ON THE KA`U DISTRICT Gym & Shelter Draft Environmental Assessment are due this Friday, March 23.
At a community meeting held in November, one Pahala resident expressed concerns about flooding problems, saying that, during heavy rain, water quickly runs off of the grassy area where the shelter and gym are planned and floods neighboring yards and streets.
According to the draft EA, to dispose of additional runoff generated by impervious surfaces such as roofs and pavement, drywells will be installed. The drywells will require an Underground Injection Well permit.
Mitsunaga & Associates’ Civil Engineering Report, included in the draft EA, states, “The proposed building will have roof drains connecting to the new subsurface drainage system. Existing drainage patterns will be maintained, as much as possible, runoff will sheet flow across the site to landscaped areas, or to proposed drainage structures.”
The Draft Environment Assessment is available at Pahala and Na`alehu Public Libraries and online at hawaii.gov/health/environmental/oeqc/index.html. Comments can be sent to Tammy Kapali, Planner, PBR Hawai`i & Associates, Inc., 1001 Bishop Street, Suite 650 Honolulu, HI 96813 or faxed to 808-523-1402. Comments can also be sent to County of Hawai`i Department of Public Works, Attn: David Yamamoto, Aupuni Center, 101 Pauahi Street, Suite 7, Hilo, HI 96720 or faxed to 808-961-8630.
KA`U COFFEE FESTIVAL will hold its meeting tomorrow at 5 p.m. at Pahala Community Center. Public is invited to help the coffee farmers celebrate their new industry and thank the community through this annual event to be held on March 12.
HULA HALAU KE `OLU MAKANI O MAUNA LOA performs Wednesday at 6:30 p.m. in Hawai`i Volcanoes National Park’s Kilauea Visitor Center Auditorium. Hawaiian entertainer Meleana Ulrich-Manuel, a native of Kilauea, and her halau perpetuate Hawaiian culture, protocol and history through song and dance. Donations are accepted, and park entrance fees apply.

VISIT OUR SPONSORS AT WWW.PAHALAPLANTATIONCOTTAGES.COM AND WWW.KAUCOFFEEMILL.COM.
Posted by The Ka`u Calendar at 10:04 AM