BIOFUEL DEVELOPER `AINA KOA PONO will host a public meeting at Pahala Community Center on Monday, Sept. 19 at 6:30 p.m. according to the Office of Councilmember Brittany Smart. The company plans a question-and-answer session and to update the public on its plans for a refinery between Pahala and Wood Valley and a biofuel farm on 13,000 acres near the refinery and along the old sugar cane haul road between Pahala and Na`alehu. The company promised to hold monthly meetings with the community. The last was Feb. 21 in Pahala.

PACIFIC QUEST, which operates a wilderness and agricultural therapy program for youth in Ka`u, is asking for a permit to also operate in Hilo. Pacific Quest wants to establish a living facility on resort-zoned land in Waiakea. A public hearing will be held in the County Aupuni Center Conference Room in Hilo on Thursday, Sept. 1 at 9 a.m.
According to its website pacificquest.org, Pacific Quest aims at helping emotionally distraught teenagers by putting them in stress-free, outdoor environments, and teaching them sustainable life skills like gardening, and physical and emotional health. Pacific Quest has 10 acres of land between Pahala and Na`alehu, seven of which are a certified organic farm and the other three a retreat. The hearing will also consider the revocation of a permit allowing the company to establish a community health center in Waiakea.

THE COUNTY’S DECISION in June to stop bringing free mulch made from green waste to Ka`u is receiving some criticism. Ka`u coffee farmers successfully petitioned Mayor Billy Kenoi to end the program in Ka`u to help stop the spread of coffee berry borers that invaded the district, most likely from Kona. This has made access to mulch more difficult for some farmers and gardeners. Ocean View resident Stephen I. Adler wrote to The Ka`u Calendar expressing his concern over the impact the decision has on farmers not engaged in the coffee business. “Most residents,” he said, “cannot afford to buy needed dirt, mulch or compost. We mix mulch with cinders to make quality dirt. Why should coffee growers have preference over us?” The county Department of Environmental Management has issued a Request For Proposals for mulch to be made that is pest-free, and could consider returning mulch to Ka`u once the new process is in operation.

NAMES OF FIVE FIRE CHIEF CANDIDATES have been released by the county Department of Human Resources. Aaron Arbles, Glen Honda, Gerald Kosaki, Paul Paiva, and Darren Rosari applied to succeed fire chief Darryl Oliveira, who officially retired on Aug. 1 but has agreed to volunteer as temporary fire chief until the next chief is selected. The Fire Commission will host two public hearings and meetings to interview applicants and take public input. The first will be Tuesday, Aug. 23 at 9 a.m. at the Department of Liquor Control Conference Room and the second on Thursday, Aug. 25 at 9 a.m. at West Hawai`i Civic Center. Those interested may submit testimony by mail to the Fire Commission, Corporation Counsel, 333 Kilauea Ave., 2nd Floor, Hilo, HI 96720, or by email to the Commission secretary at jkualii@co.hawaii.hi.us. Testimony must be submitted by Wednesday, Aug. 24, at 4:30 p.m.

THE NEW BUILDING CODE approved in July in a five-to-four vote by the County Council was rescinded, said the Office of Councilmember Brittany Smart. Reconsideration of Bill 270 was postponed for 30 days and will be subject to two public meetings. The bill may be viewed at http://records.co.hawaii.hi.us/Weblink/DocView.aspx?id=756796&page=1&dbid=0. For further information call the Department of Public Works Building Division at 961-8331. 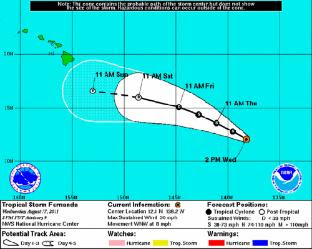 FERNANDA BLEW into the Central Pacific overnight as a tropical storm and is expected to turn more westerly and weaken into a remnant low by the time it passes south of the Big Island on Monday. Early this morning, Fernanda’s maximum sustained winds were 65 mph with higher gusts, and she was about 1,040 miles east–southeast of South Point, heading northwest at 13 mph.
BLUEGRASS MUSICIANS return to Pahala Plantation House this coming Tuesday, Aug. 23 at 6 p.m. with the same group of musicians who brought down the house in March when they performed in Ka`u. Tyson Alteri sings and plays lead mandolin and co-founded Rockygrass Band Competition in Lyon, Colorado. He now resides in Nashville, Tennessee. Katy Rexford sings and plays lead fiddle. She grew up in North Carolina, playing violin in her public school orchestra at age 8. She plays Old Tyme, Country Blues, Irish, Cajun and Western Swing. She lives in San Francisco and sings with the Whisky Richards and Mississippi Rider. She has played and toured with Boz Scaggs, Michelle Shocked, Del Williams and Jesse Jay Harris. Rion Schmidt sings and plays lead banjo. He is a 15-year veteran of the banjo and has been teaching for 10 years. His style of driving Bluegrass banjo was honed in the rugged mountains of Alaska among the glaciers and grizzlies. The stand-up bass player will be Shea McKusic, who is also famous for her Johnny Cash and June Carter duets. Also joining in will be Keoki Kahumoku and friends.
The concert is free, but donations accepted for the musicians. Doors open at 5:30 p.m. at Pahala Plantation House this coming Tuesday.

KA`U PLANTATION DAYS, this Saturday in Pahala, will bring together not only stories of days gone by, but many maps, books, photos, charts and other documents from the sugar plantation will be on display. One displaced sugar worker who used to operate a crane at the sugar mill is Manuel Marques, who will display his new business, growing and selling Ka`u Coffee. He will serve it to the public and talk about his transition from sugar to award-winning Ka`u Coffee.
The event will be held at Pahala Plantation House from 9 a.m. to 3 p.m. This year marks the 15th anniversary of the closing of the Ka`u sugar mill. The anniversary will celebrate history of the plantation and the evolution of agriculture in Ka`u. The event begins at 9 a.m. with parading of a retired Ka`u sugar cane truck from Pahala Armory to the corner of Pikake and Maile Streets in front of the old manager’s house.
Lunch will celebrate the town’s diversity with Filipino, Hawaiian, Portuguese, and Japanese food. Displays of Chinese life and the other ethnic groups from the town will be at stations around the yard and in the house. There will be Portuguese and Filipino dancing throughout the day and a video on the last cane harvest in Pahala.
GEOPHYSICIST MIKE POLAND of the Hawaiian Volcano Observatory will give an eruption update next Tuesday at Kilauea Visitor Center Auditorium. Poland will shed light on Kilauea’s March Kamoamoa fissure eruption and discuss Pu`u `O`o’s current activity. The floor of the Pu`u `O`o vent on Kilauea’s east rift zone collapsed in March. Lava erupted between Napau and Pu`u `O`o, beginning the Kamoamoa fissure eruption that reached over a mile long. The discussion is part of Hawai`i Volcanoes National Park’s After Dark in the Park program. The event begins at 7 p.m.
Posted by The Ka`u Calendar at 10:39 AM Links to this post